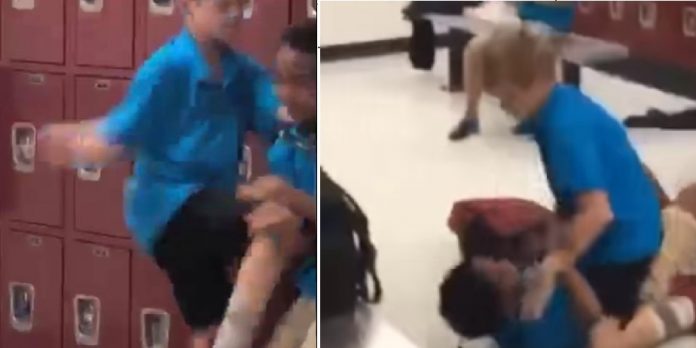 A 12-years-old student was slammed to the floor and punched repeatedly by a  classmate after a physical education class at Blake Academy in Lakeland.

Lauren Springfield, beaten boy’s mother was in a state of shock. She even felt like she was having an out-of-body experience watching an older student throw, kick and punch her 12-year-old son. As we can see in a video below an older student threw a boy over a bench after kneeing him to the stomach, pinned him down while repeatedly punching him.

He grabbed the younger boy around the neck and shoved him over a bench onto the floor, then pinned him and continued to punch him in the face and head.

According to Lauren Springfield’s Facebook post one teacher was witnessing the beating of her son but didn’t do anything to stop it.

“Early today I tried to give the teacher that should have been overseeing the students the benefit of the doubt. Having once been a teacher for a short period of time I thought well maybe he had to go to the restroom or maybe he was talking with another student in the gym…

I keep coming back to the word disturbing. This calls for his job to be gone. There is no excuse.” – wrote Lauren Springfield on her Facebook account.

No child should have to experience this. To Mr. and Mrs. Springfield, we're so sorry this happened to your son. Although we don’t expect you to know who we are, we hope the testimonials/comments from people whose lives we’ve changed will earn us enough trust for you to give us a chance to help rebuild your child. If you’d consider accepting our offer to fly the family out to California so we can put your son through the Gracie Bullyproof program, please contact us at [email protected]

As there’s a lot more going around the incident and new details are coming up daily, Lauren Springfield, the young boy’s mother, is continuously writing posts about the beating of her son. You can check them all on her Facebook profile.

We also had a conversation about court processes and clarity of the severity of actions like the ones that occurred and we came to the conclusion that more education needs to be done for the clerks at the courthouse so they are better able to educate families on their options and the actual process.

This here is progress when it comes to this particular piece at least the court system is starting a dialogue about how to best guide families. What’s fair is fair y’all – our sincere apologies to Judge Butz and we hope looking at how things are processed will prevent this from happening in the future. While this doesn’t change the fact that the injunction was denied – we do want to set the record straight.

Again, we thank you for your support and allowing your voice to be heard but let us also remember to be respectful in what we are doing – kind matters.”

Do you know what these people are trying to do to this 12-year-old?!?

They are trying to run a smear campaign because they are upset that they are getting called out. So all of you were right – those that said they would come for his character they have in the most disgusting way. I HAVE NO WORDS. I AM SO ABSOLUTELY DISGUSTED.

They are trying to make it seem like our child was going to sexually assault another female student. That he was this crazily insensitive predator. Are you kidding me? So let me get this right you’re going to fabricate this story about a kid that has no history EVER in the school of doing any of this. NONE OF HIS PREVIOUS SCHOOLS AND TEACHERS WOULD EVER SUPPORT THIS. They would like us to believe that this “big bad bully” that can’t keep his hands off of people didn’t fight back?! This is ludicrous.

Apparently all of these things happened and never not once is there one disciplinary record, one call home…not once in a month and a half of school. THIS IS CALLED RETALIATION AT ITS FINEST.

I see the deflection strategy. I see the how they are trying to offer a distraction. THIS WILL NOT WORK.

Am I surprised? HELL NO – we were expecting them to do something absolutely ridiculous with how shady this whole thing has been.

HE WILL NOT BE DESTROYED.”