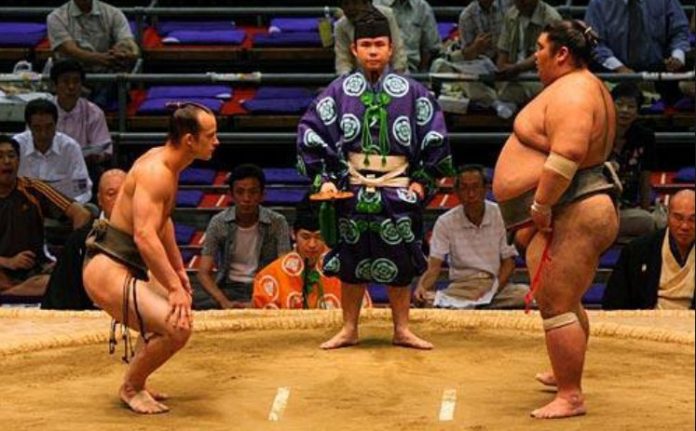 Takanoyama Shuntarō aka Pavel Bojar is a former sumo wrestler. He is definitely not a typical Sumo wrestler and we can say that he have nothing in Common with Other Sumo Wrestlers except the Sumo techniques. He’s not dieting as they do, he doesn’t look like they do, he’s not fat as they are.

He’s much thinner and lighter than his Sumo opponents. He weighs around 100 kilos while other sumo wrestlers are having more than 150 kilos.

Takanoyama Shuntarō is originally a Judoka, but in 2000 he discovered sumo wrestling and within a year of his entry into the sport he was able to win the bronze medal at the Junior World Sumo Championship.

After that, he traveled to Japan to compete at the most challenging levels of the sport. And he was very successful.

He was given the shikona of Takanoyama, meaning “noble mountain.” He reached the sandanme division in January 2003, and the third highest makushita division in March 2004. He fell back to sandanme after only two tournaments but returned to makushita in March 2005 and largely remained there for the next six years, unable to break through to the elite sekitori ranks.

Takanoyama was hampered mostly by an inability to put on weight. His height of 1.85 m (6 ft 1 in) and weight of 90 kg (200 lb; 14 st) make him among the lightest sumo wrestlers in the modern era. In November 2008 he climbed as high as makushita 13, beating his previous high of makushita 15 set in November 2005, and he moved up to makushita 9 in January 2009. After compiling a 5-2 record in the July tournament, which included a win over the former maegashira Ryūhō, he reached a new highest rank of makushita 4 in September 2009. He produced another good score of 5-2 in May 2010 from makushita 6, which included wins over Jūmonji and Hōchiyama. In January 2011 a 6-1 score saw him promoted to a new highest rank of makushita 2 for the May “technical examination tournament.” There he scored 5-2, guaranteeing promotion to the jūryō division for July. When the banzuke was released on June 27, Takanoyama was at #5 West, the tenth highest rank in the 26 man division. It took him 57 tournaments from his professional debut to reach jūryō, the second slowest among foreign-born wrestlers after the Brazilian Wakaazuma.

He had a successful jūryō debut, winning seven of his first eight bouts and finishing on 10-5. This earned him an immediate promotion to the top makuuchi division for the September 2011, only the third time since the six tournaments a year system was established in 1958 that a jūryō debutant has achieved this (the other two were Daikiko and Ichihara). Weighing in before the tournament at just 98 kg (216 lb; 15.4 st), he is the first wrestler under 100 kilos in the top division since Mainoumi in 1997.

Takanoyama had a difficult start to his makuuchi career, losing his first five matches and then only winning the sixth when his opponent inadvertently stepped out of the ring first (isamiashi). However, he picked up a legitimate win on Day 7, downing the 166 kg Yoshiazuma with a hooking inner thigh throw (kakenage) and instantly becoming a favorite with the tournament crowd. He finished on 5-10, which sent him back to jūryō in November, but he responded with a 9-6 record which returned him immediately to the top division for the January 2012 tournament. He was unable to produce a kachi-koshi score in either January or March, but in the May tournament, he managed an 11-4 record in jūryō which earned him a 2nd place and a return to the makuuchi division in the July tournament. However, he had yet to earn a winning record in five tournaments in makuuchi and was demoted to jūryō once again for November. His 7–8 record in July 2013 was his seventh consecutive losing score, pushing him towards the bottom of the jūryō division. In September 2013, he finished on 5-10, his weakest performance in jūryō so far, which sent him back to makushita 2 for the November tournament. Afterward, he skirted the border between the two divisions, being relegated twice and promoted twice.

Takanoyama announced his retirement after the July 2014 tournament, where he had withdrawn after losing his first match, guaranteeing a large fall down the makushita division. He said, “I mount the dohyo to win, and I can no longer win. He indicated that he would return to the Czech Republic with his family, and try to make use of his Japanese language skills. Takanoyama’s danpatsu-shiki or retirement ceremony was held at his stable on 7 September 2014.