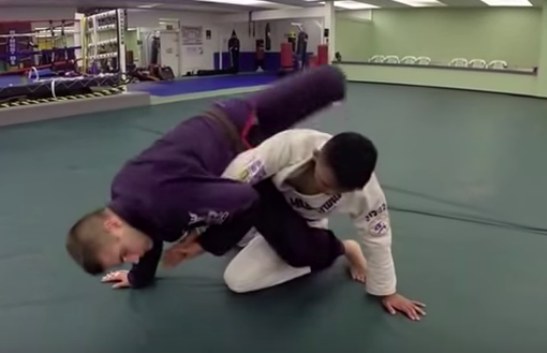 One of the coolest submissions you can pull of is a rolling armbar. Actually it is one of the coolest ways to set an armbar submission up but nevermind that. That’s just semantics. A rolling armbar is flashy, exciting to pull off, and effective. Not to mention that it is very very easy once you know what you’re looking for, and how to execute the roll. A bit of practice in terms of timing, and you’ll be able to roll people through to an armbar like the best of ’em.

The way to look at the rolling armbar is not the same as a flying armbar. Wiel ti may seem flashy and attractive, a rolling armbar is simple and much more reliable. In that sense, try looking at it as a way of getting tight armbars, when there isn’t any insight. Moreover, when you perfect the rolling armbar, you’ll be able to also get quick upside-down armbars, as well as use it to get the back, or transition into the mount. As I said, it si much more than just an armbar.

The Concept Of The Roing Armbar

How exactly does a rolling armbar work? Well, let’s look at the basic armbar first. To execute an armbar you want your hips to be behind the opponent’s elbow. You want to control their shoulder with your legs and their wrist with your hands. Pressure comes from the hip, forcing the elbow in the direction it doesn’t naturally bend. The submission can be done from the bottom, from the top, or in between (upside down armbar). However, it is not finishing the armbar that is hard, it is getting to a tight finishing spot that is where most people struggle.

The rolling armbar usually ends in the mount, so in order to become good at it, you’ll need to figure out how you want to attack the mounted armbar. By how, I mean choosing which arm goes in (spiderweb, or “traditional), where your legs go, how you’re going to break grips, and other basic armbar stuff. In other words, figure out how you like to do armbars before trying to set them up by rolling.

A rolling armbar means you’ve already latched to an arm but you’re far from a position to finish. LAthcing to an arm can be as obvious as an armbar grip, or inconspicuous as an arm drag or and udnerhook. The roll is what allows you to get into a preferrable armbar position, which is the one we usually enter from the mount. Also, the roll is what helps you open opponents up to armbars from positions that don’t usually offer them, like the turtle. It is also a great tool to use to hunt for armbars while you’re transitioning between positions.

For the basics of the rolling armbar, let’s look at a way to set it up against a turtled up opponent. It is who you’re going to use it the most, so we may as well break it down in detail.

The way you get a rolling armbar from turtle is by, of course, isolating an arm. The best way to do it, also known as the Ronda Rousey armbar, is to isolate the near side arm by using your opposite sidearm. If you’re holding the turtle ina a traditional manner, with an arm around the waist, then that’s the arm that needs to isolate the opponent’s arm.

After completing the most important step, which is latching on to an arm, you have two more. One is to make sure you know how to roll. The setup goes like this: try and have the connection with your arm elbow deep, and use your other hand and head as posts. The goal is to get one leg over the back of the opponent’s neck (contact with the shin), and the other inside the armpit of the arm you’re attacking. The roll itself happens on your shoulders and not the top of the forehead, which is a crucial detail to remember. In other words, you use the post with your arm to go on your shoulder, before you roll.

the final piece of the puzzle is controlling the near side leg, or better said foot. Once you’re on your shoulder you have a free arm to grab the foot. The nearer you grab towards the toes, the better. Pulling that leg while you place pressure with the shin on the head will roll your opponent without you having to risk your neck, or anything, for that matter.

The Ronda Rousey armbar is the most common version of executing a rolling armbar. It is a staple of Eddie Bravo’s 10th Planet System and ends up in his, SPiderweb armbar position. I personally love it, but it may not suit you as much. So, let’s explore a couple of different rolling armbar setups:

The closed guard is usually the spot to set up a direct armbar, but we all know what happens when that fails – a guard pass. That means that unless you’re extremely slick about it, you can’t rely on this move against all types of opponents, particularly larger and more flexible ones.

An alternative and a great one at that would be the rolling armbar setups form the closed guard. Setting it up begins just like with a regular armbar, with you isolating the arm and preferably, having a grip on the collar to prevent the top person from creating space. When an opponent tries to stack you, which you can bet on with seasoned grapplers, you activate your trap. Staying completely tight, you go for a back roll, using the momentum of being stacked. This will get you to a belly-down armbar, but since you want the rolling version, you grab the near side leg from there and roll over just for the turtle setup Ronda likes to use.

The rolling armbar setup from side control is also known as the Buchecha armbar. It is what Buchecha used on Roger Gracie in their legendary Metamoris match. The setup is fairly simple – You want to have an underhook grip on the top arm when an opponent is turning away from you from bottom side control. Throwing a leg over their waist will likely have them trying to turtle because not giving up the back is going to be their main concern.

You need to use the motion of an opponent going to turtle and go fro a roll yourself, tornado guard style, over the opponent. The underhook and leg position will ensure you get one of the slickest and unsurprising rolling armbar setups ever!

The rolling armbar is not just a cool move you can use when you get the opportunity. You can go for eas or complex setups, involving direct action or setting traps. In any case, Gi or No-Gi, the rolling armbar is a must in any self-respecting grappler’s arsenal. It increases the chances of you finishing with an armbar, confuses opponents when you roll them gains their will, and opens up interesting follow up attacks that regular armbars don’t.