If you have been training Brazilian Jiu-Jisu for more than a year, and one morning you wake up pain-free, that means’ you’ve died. However, from all the small (and not so small) aches and pains BJJ brings along, finger pain is one of those we’d all love to be rid of. Finger tape does help, but that’s an extra 5-30 minutes of wrapping and unwrapping every time you want to train. Isn’t the re a more efficient way to help protect fingers in Jiu-Jitsu? It seems there is – the protective BJJ glove!

A young entrepreneur has come up with what might turn out to be a life-changing concept for grapples, particularly those that train with the Gi. It is not just BJJ athletes though – Sambo and Judo grapplers will also be grateful for any product that helps give their suffering finger knuckles a break. Ashkan Joshghani is a young entrepreneur that came up with the BJJ glove, a breakthrough concept that might just change Gi Jiu-Jitsu training forever.

Contents hide
Finger Injuries In BJJ
The Innovative Concept Of The BJJ Glove
No More Finger Tape?
Wrapping Up 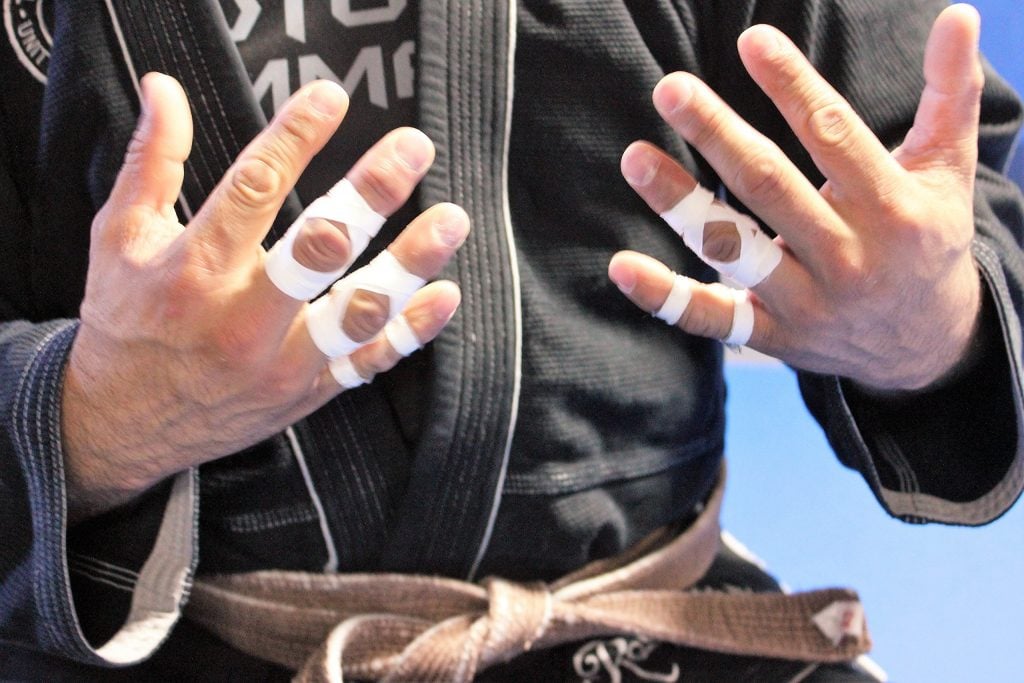 Grips, grips, grips! Grip that lapel, don’t let go of that pants grip, strip the opponent’s grips away!!! These are just some of the stuff you hear around any BJJ gym, and especially at Jiu-Jitsu tournaments. Since there can be no grappling without contact, and you need to put your hand on someone for meaningful contact, grips are pretty much what makes grappling possible. However, grips should not be taken for granted, because the body parts that make them possible are actually very fragile and tender.

The fingers of our hands, along with the muscles in our forearms are what makes gripping possible. But you already knew that judging by the massive amounts of finger tape you’re using every item you’re on the mats. the fingers have really small muscles that can you can only condition so much. Moreover, there are three joints to each finger, providing a lot of spots where injuries might occur. In fact, it is where most injuries DO occur in BJJ.

To be honest, injuring a finger is painful, but not that big of a deal. itis when you do it over and over again and you develop arthritis or make an injury a lasting one that issues start to appear. For example, pain. Once you damage your fingers from overuse in grappling, even grabbing a towel after showering will be a chore, let alone grappling with people wearing Gis. Enter finger tape, the ultimate BJJ savior that makes training possible again.

But what if there was a better choice? It was about time some came up with a protective piece of BJJ gear like Ashkan Joshghani’s BJJ glove.

The Innovative Concept Of The BJJ Glove

Ashkan Joshghani is a graduate student in veterinary medicine at Ghent Universit and a Brazilan Jiu-Jitsu practitioner. During his time training, he saw the impact grappling has on the joints, especially those of the fingers. Seeing his coach’s knuckles, and being able to see the process at every stage of the level in different belts in the gym, he decided to think outside the box.

As Ashkan says, finger tape costs money, it takes time to set up, and is not really functional. As someone with a decade of BJJ under my belt and plenty of destroyed knuckles, I tend to agree. Finger tape comes off, gets pulled over or under a joint and is simply not meant to last in a sport like JIu-Jitsu. Ashkan’s answer? A glove.

Combining his medical experience and practical knowledge of Brazilian Jiu-Jitsu, Ashkan started doing sketches to figure out how to build a piece of BJJ gear that will help protect the finger joints. The goal was to prevent abnormal motion, while at the same time not impacting the normal range of motion negatively. This led to the creation of the Exoligamentz BJJ glove, a groundbreaking piece of gear that will change grappling sports for the better.

Despite the usual funding obstacles, a post that went viral in 2017 has made it possible for Ashkan to set up for R&D and finally, the production of his innovative concept. The target is that in a year from now, in BJJ-Mat-Enforcer the BJJ glove will be ready for mass production.

At present, there is a prototype that is begin developed. Moreover, Ashkan gas gotten requests not just from grapplers, but volleyball and handball athletes too, and even musicians!

Sign me up and take my money! If I never have to use finger tape again in order to train Jiu-Jitu, I’m all for it! Seriously, finger tape really does help but it is far from an optimal solution. Try training when you don’t have any on you, and your order still hasn’t arrived.

In all honesty, switching from Gi to No-Gi grips, even during Gi Jiu-Jitsu training for me was a decision that was greatly influenced by developing a particularly bad case of BJJ knuckles. It has done wonders for my game, I’ll admit, but sometimes, you just need to grip that GI, Ater all, it is part of the game.

The BJJ glove is reusable, doesn’t’ take space, you only buy it once, and it will help deliver everything finger tape does, without any of the drawbacks and restrictions. PLus, the glove looks really cool! It sounds too good to be true, I know, but it also sounds like a very realistic concept. and I can’t wait to try it on. 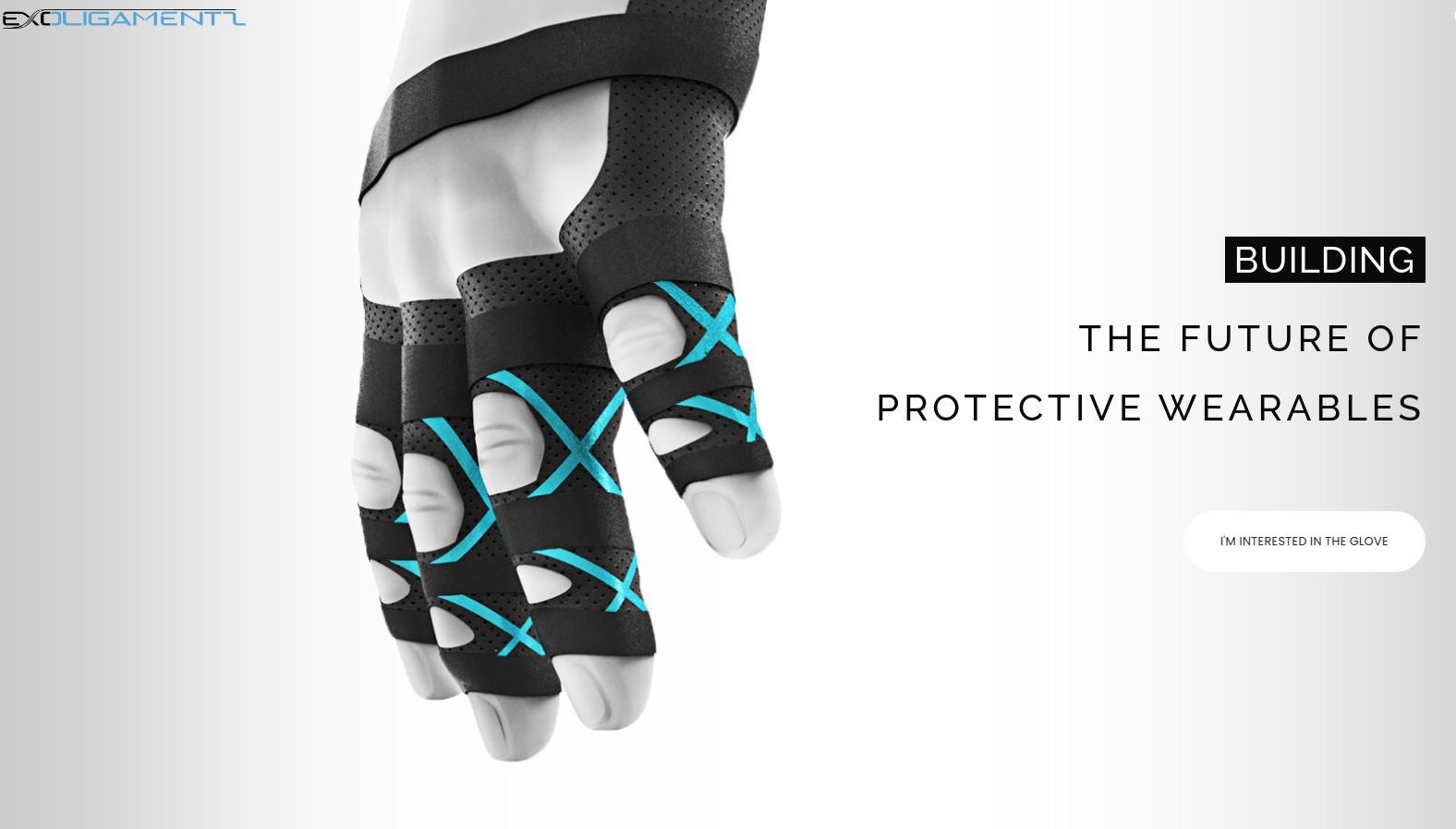 Ashkan Joshghani is on t to something with the Exoligamentz protective BJJ glove. It won’t just work well for the fingers, but also may extend to the wrist, without having to change the design too much. It is a very interesting concept that is highly promising and I doubt will be unuseful. I know I’m up for one of them as so they are available, given the state of my finger joints.