Who is the greatest grappler alive today? There can’t be any doubt that Gordon Ryan is proving over and over again that he deserves the self-proclaimed title of King. When it comes to grappling, there’s nobody that could rally challenge Gordon nowadays. Yes, we’d love to see some matchups, but I have a feeling that he’ll end up n top. After all, he did win the DCC with a broken arm and a barely healed knee ligament injury. In the process, he also provided the most unique BJJ DVD I’ve seen so far. In “My Evolution Your Revolution.” DVD Gordon “King” Ryan goes through every of his ADCC matches, breaking down every little move and piece of strategy he employed.

ON SALE HERE:
Gordon Ryan – My Evolution Your Revolution 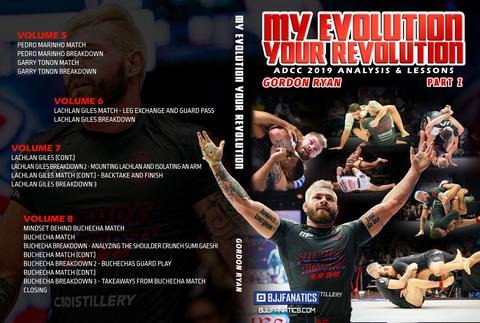 So far, we have a couple of Gordon Ryan DVDs to treat ourselves on. They’re about passing the guard and the closed guard and contain enough material to keep us occupied for the better part of a couple of years at least. However, as special as those instructionals are, they are nowhere near this latest issue. My Evolution Your Revolution is not just enticingly named, this Gordon Syan DVD is the first one of what I believe will be a whole array of instructionals. People always look at grappler’s fights more, compared to their instructionals. Well, Gordon “King” Ryan has managed to bring the two together in an unprecedented format. And it is a joy to watch!

Not Your Everyday BJJ DVD

Let me take you through the evolution of BJ JDVD instructionals really quickly. Back in the day, just as VHS started dying off due to the rise of the DVD, BJJ became global. This is the main reason why most of the material out there, even “ancient” is on DVDs. However, just a couple of decades ago, that meant a few techniques grouped somehow in a single DVD disc. I still have a few of these lying around. They do contain incredible information, but they’re pretty poorly structured and years removed from what we’re used to seeing nowadays.

The real revolution with BJJ DVDs came only a few years ago. I really have no die who the first one was to decide to use a multi-DVD release in order to provide more structured information. Whoever it was, kudos to them. At first, DVDs were no longer than two-volume releases, before we saw the rise of the now-standard fours volume BJJ DVD. Most high-level competitors/coaches of today have their work available in such a format. Usually, it coves a specific subject and goes really deep, following thorough and extremely well-organized patterns. As such, this format is the perfect Jiu-Jitsu learning tool.

Then came the real revolution. John Danaher was the first to require double the space to uncover his most sought after systems. As such, he “fathered” the eight-volume BJ JDVD instructional, just as he did the leg lock system in Jiu-Jitsu. From there on, his students, most notably Gordon Ryan kept the same system for their DVDs. Lachlan Giles is another one who loves to go in-depth and use 8 volumes.

Lastly, we have this brand new concept that Gordon “King” Ryan has just brought forward. His “My Evolution Your Revolution” instructional is unlike anything we’ve seen before. This is a high-level breakdown of 8 different matches, done by the man with the best insider information possible.

My Evolution Your Revolution DVD Review

Leave it to Gordo0n Ryan to mix up something exciting. Of course, the name “My Evolution Your Revolution” is also right up his ally. It is brash but attractive, and I doubt anyone could resist at least peaking into it. Let me clear up one thing from the beginning – Ryan’s level of breakdown here is unbelievable. Simply put, I’ve never seen anyone share as much detail on their complete game as Gordon did. Mind you, he did so against some of the toughest grapplers in existence, in his quest to double ADCC gold just a couple of months ago.

This Gordon “King” Ryan instructional has eight volumes in total. IN terms of chapters, there are virtually none. Each volume is dedicated to a single match only, usually featuring the match, followed by a complete and extremely detailed breakdown. The DVD’s follow the matches in order, starting with Ben Hodgkinson, then Tim sprigs, Lucas Barbosa, Vinicius Gazola, Pedro Marinho, Gary Tonon, Lachlan Giles and finally, Buchecha. Each DVD actually features something different, with the last one explaining the absolute final match being the most unique of them all.

With Ben, Gordon had one of those easy matches. Anyone else facing a monster like Hodgkinson would’ve had a nightmare, but Ryan made really quick work out of him. The match ended in a quick submission via rear-naked choke. Paving the way for Ryan’s other wins in the tournament. The DVD here starts with an introduction, as it is the very first volume. Going forward, the match in its entirety is first. Then, Ryan goes on to explain everything, recreating the match wit his Uke which is once again Nat Santoro. Despite this begin a short match, Ryan really covers extreme details that probably no one else thinks of during grappling. I know I didn’t.

The Tim Spriggs match was one where the technical prowess of Gordon “King” Ryan really shone through. Tim is one big human being that knows how to grapple. And yet, Ryan made it all look like a child’s play, right from that initial takedown attack. In fact, The Sumi Gaeshi that ended up in an Ashi Garami actually gets a chapter of its own in this volume of the “My Evolution Your Revolution” DVD.

The volume then goes on with the breakdown, explaining the back attempt Tim had, and why it failed. At the same time, Gordon explains why his back take worked so well, eventually leading to yet another rear-naked choke victory, this time 7 minutes in the match.

If Gordon ran into a difficult match (sort of), ti was this one. Lucas Barbos is a beast, and he managed to cause enough trouble for Gordon to see the fight go to the very end. Still, it wasn’t like Ryan was at risk at any point, but he did have his work cut out for him. The match ended up with a victory via points (3:0) after 15 minutes. If you want to know exactly why, and how Ryan got the back once again, it is all in this volume.

One more fight, one more rear-naked choke victory for Gordon “King” Ryan. Vinicius certainly did everything he could to reach the final. AS such, he was also more than a decent opponent for Ryan, as much as he could hope for. This match also saw to masterminds of BJJ in the opposite corners with Marcelo Garcia coaching opposite John Dnahaer. Ryan controlled everything from the get-go once again. He covers his takedowns in detail, along with the mount control and other transitions. Of course, Ryan finally ended up, taking his time on the back of Gazola, before finally sinking in the choke with just over 40 minutes left of regulation time.

This match opened up the Absolute division, and once again went the way everyone expected. Pedro Marinho was once again an easy match for Ryan. IN fact, it was kind of a “back to basics” for the King, finishing by an outside heel hook, like in the good old days of EBI. Ryan only took 3 minutes to dispose of Pedro.

This was yet another of the absolute division matches that had everyone on their feet. It may not have been as entertaining as Lachlan beating the likes of Duarte and Aly, but It was a fun one. It featured long term teammates and close friends Gary Tonon and Gordons “King” Ryan facing each other. Tonon had to settle for silver in the -77 and was doing fine in the absolute up until that point. The two had their fun but the match ended up with a rear-naked choke after just 3 minutes.

Arguably, the one match that could’ve potentially derailed Ryan’s hunt for the double gold. After losing in the first match in his division, Lachlan made the comeback of the tournament in the absolute. He quickly heel hooked both Kaynan Duarte and Patric Gaudio. With both men heavyweights, it seemed like a genuine threat fro Ryan. In fact, there were a few early leg exchanges that got everyone on the edge of their seats.

However, Ryan found a way past Lachlan’s guard and it was all downhill from there. Every step of this match, from the initial exchange,s to acquiring mount, and eventually, another rear-naked choke finish is broken down in extreme detail. SO much so, in fact, that there two volumes of the “My Evolution Your Revolution” DVD are focusing on just this match, despite it lasting only around 7 minutes.

The final of the absolute, Ryan’s final match of the tournament, and the subject of the final volume in the “My Evolution Your Revolution” DVD. IN every sense of the word, this is the cherry on the cake. As a match, the clash of these two was something everyone had been hoping for. IN fact, the anticipation was so big, especially given that it was the ADCC absolute final that Gordon starts off this volume very differently to others. First up, he shares his mindset going to the BUchecha battle, and his tactical approach. He then heads over to that Sumi Gashei he did once again, doing a step by step analysis.

Since this match was anything but one-sided, there’s also a portion in here on the guard Buchecha played, though with limited success. Takedowns also feature, as dos the famous Buchecha heel hook attempt. The match went on past regulation time and into tow overtime rounds. Still, Gordon “King” Ryan wrapped this match up with yet another victory, as a result of a negative point, Buchecha got in the first overtime round. A close one, and the most difficult match of the tournament of the King.

What’s Next For Gordon?

In all honesty, There’s not much left for Ryan now. Of course, there’s that elusive rematch, or better said, the third match with Felipe Pena everyone is rooting for. Gordon lost twice to Pena, so this is bound to happen at one point or another. Moreover, there’s the Galvao match that’s all set for the next edition of the ADCC, in the format of a super fight.

Still, in the meantime, I certainly hope that the “My Evolution Your Revolution” DVD is not Ryan’s last instructional. I’m also sad that he won’t be facing Erberth Santos in this weekend’s 3rd Coast Grappling event, but rather 3x NCAA champion Bo Nickal. It is still going to be a fun one to watch, though!

As a competitor, I find the format of the “My Evolution Your Revolution” Gordon “King” Ryan DVD the very best one available these days. The reason is that you get to watch actual matches of the highest level and get an insider view of the action. Ryan, as meticulous as ever, did a really great job with this one. He covers everything, from mindset to tactics and technical details. Moreover, he both commentates on the matches and breaks things down to help explain them better. Unique in every sense of the word, and a BJJ instructional well worth acquiring.

ON SALE HERE:
Gordon Ryan – My Evolution Your Revolution 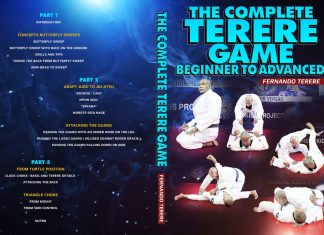