Tom De Blass. Half Guard. Two things that go hand in hand like a white belt and a Shaka hand gesture. Tom is world-renowned for his guard, regardless of variation. However, his half guard is the stuff of legends already. It is simple – DeBlass has crazy good fundamentals and he likes to put them to use all the time. That’s the secret behind all his success and particular his half guard game. That said, the man has wealth of knowledge about the half guard, so when you see an instructional on that subject that’s his, you better pounce! That’s a piece of advice I follow myself, so when I saw the “Deep Half Guard Domination” DVD, I did not hesitate for a second.

I might have to feed on tuna and rice for the rest of the month, but at least I got the “Deep Half Guard Domination” DVD! It is everything I’ve come to expect from a Tom DeBlass instructional. There’s just enough there to take my deep half to the next level, and not too much to make me reluctant to use the instructional on a daily basis. The perfect balance between practicality and acquiring new knowledge. Plus, Tom is probably one of my favorite people to watch anyway, as he has one of the most laid back teaching styles ever. He delivers what we need, as simple as that. No dumb jokes, or military-like behavior. Just JIu-jitsu, at its very best – from the bottom!

To be honest, I got this one in a digital format, as I couldn’t wait for the DVD to arrive. I’m exploring the deep half my fourth year in a row now, and there were a few burning questions I needed to find answers to. The deep half is the perfect position for people in the Master’s divisions. Once you pass thirty, you need to start thinking about the deep half, at least as far as I am concerned. You get the security along with a great way of leverage and attacking opportunities. It is the ultimate BJJ trickery position, one that will frustrate anyone. Moreover, it works in both gi and No-Gi, confusing opponents with or without lapels.

Speaking of No-Gi, we all know how much Tom DeBlass likes to roll without a kimono. In that sense, the “Deep Half Guard Domination” is a purely No-Gi DVD. The usual impression is that the deep half guard is more difficult to paly in No-Gi. This is true, as far as my experience goes. However, the rewards are much bigger. First of all, you’ll understand how to truly control the position when you don’t have the luxury of hanging off lapels and belt grips.

The instructional follows the now established format of step-by-step progression over four volumes. Introductory stuff and positional mechanics kick it off, heading into reversals in volume two. This is one of my particular areas of interest and where I intend to keep my attention fro the time being. Part three takes care of common partner reactions. Apart from the mandatory Tom DeBlass narrated roll, the final volume also covers all the entries you’ll need to secure the dep half.

In the opening section, Tom DeBlass starts introducing the deep half guard by explaining the entry. This is one of those positions that are much easier to grasp when someone explains it in this fashion. Since the deep half is the perfect “flytrap”, Tom’s choice of entering off of the knee slice si perfect. It is nothing new, and I for one have done it before. However, there are a couple of details that will come in more than helpful. moreover, DeBlass keeps presenting a deep half guard game from less than ideal positions. For example, he shows how you can get a reversal even if you lose an underhook. In No-Gi this is huge.

Another common troublesome spot for dep half players is the Kimura. Yes, you can hide the hand, but then, you’re limiting your own options two. This is something that was troubling me for years. Now, Tom DeBlasss shows a Kimura escape that opens up not one, not two but three different reversal options. That’s the perfect answer if ever there was one. There is also some waiter sweep info here, which does not offer a lot f new stuff in terms of the sweep itself. However, it does offer a brand new leg lock entry that’s a real killer. Finally, once again right up my own alley, a lockdown entry to the deep half concludes the opening part of the “Deep Half Guard Domination” instructional.

The reversals Tom shares are unlike anything you’ve seen before. Once again I’ll mention that this is a No-Gi deep half guard instructional, meaning there are a lot of technical details. In terms of reversals, it’s all about getting to a better position. Tom is a master of all things slick from the deep half. OfF course, the most desired outcome is taking the back, and that’s exactly what opens the second volume.

The volume is not big but offers lots of details on each of the reversals, all but guaranteeing your success. A lower leg and leg trap reversals also feature here, along with one of the best choke defense reversals I’ve ever seen from the deep half. In a surprising turn of events, Tom DeBlass includes a portion of live rolling here as well, in order to demonstrate how everything so far works in real situations. A perfectly placed little surprise.

Past halfway in the “Deep Half Guard Domination” instructional, it is time to look at several a bit more advanced fundamentals of the position. One thing that often happens is movement since the opponent’s arms are often free. This leads to different reactions, and Tom has an answer for each of them. He starts off outside the seep half, showing you how to enter when other half guard variations like the knee shield, fail.

The real show-stealer in this DVD comes in the form of deep half guard retention or defense. Tom DeBlass has several things at hand to counter common reactions like clearing the knee or dealing with step backs and/or stepovers. That pretty much covers each direction in which an opponent can head. And the best thing is that it is all topped off with a great inverted back take that’s extremely easy to pull off.

Finally, it is back to entries. A bit of focus on recovery precedes all the entry action, demonstrating how to stay in dep half even when you lose the underhook battle. Weirdly enough for a No-Gi instructional, there’s a collar grip entry in there that might confuse you. It’s a universal one for Gi and No-Gi, and despite the name, it makes perfect sense once you see it.

The final few chapters take care of stuff like 2 on 1 grips to open up entries, as well as a cool De La Riva guard entry. Of course, there’s the ever-present live rolling session at the end, complete with Tom’s commentary.

Tom DeBlass is one of those larger than life charters that are not many in the world of BJJ. Apart from being an overall awesome human being, he is also one of the best JIu-JItsu coaches in the world. Watching him compete, although much more rare nowadays, is always a great joy. That said, I find learning form his instructional even more rewarding.

So far Tom has a myriad of DVD instructionals out there, that won’t end with the “Deep Half Guard Domination” one. In fact, he has tow other half guard volumes, on the butterfly and “regular” half guard. I own both and have learned a lot. However, I now see a common thread in the mall that I wasn’t aware of earlier. If you focus on using Tom’s half guard DVDs you’ll soon find out that they all work off of each other. That gives you more half guard opportunities that you could dream of.

I doubt tom is anywhere near done with his role in the worldwide spread of BJJ. If you ask me, he’ll most likely go down as the man with the biggest Jiu-Jitsu legacy, in terms of coaching, competing, running an academy and is the definition of a modern-day grappler. And, I suggest you help him cement and spread his legacy by checking his instructional out. If you’re a fan of the half guard, any half guard, there’s no need to look further than Tom’s stuff. Tired and tested.

Tuna and rice it is for me, as long as a dessert are the reversals and submissions I get from the deep half guard! That waiter sweep leg lock is firmly my favorite move so far, but I still have lots of the moves to try. IN any case, I’m glad someone finally thought of a No-Gi DVD on the subject of the deep half guard. Given that it is a long one, lasting upwards of three hours, I’ll need quite a lot of time to digest all the material in the Deep Half Guard Domination DVD. Time for me to watch it again! Oss! 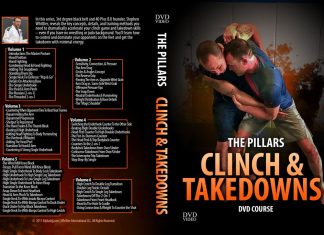 0
The usual impression of high-level Brazilian JIu-Jitsu is that of concepts and principles that meet techniques in order to make movement fluid and seamless,...