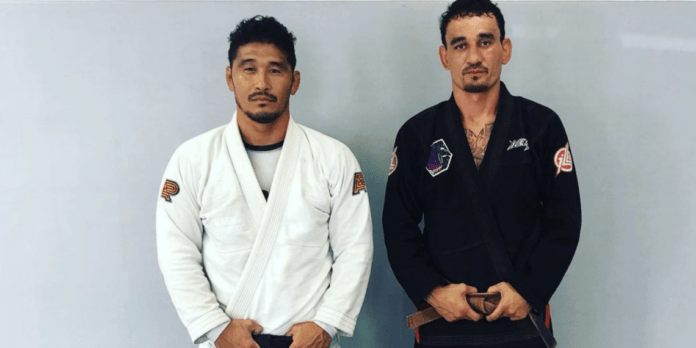 Former UFC featherweight champion Max “The Blessed” Holloway has just been promoted to brown belt in Brazilian Jiu-Jitsu. Max Holloway trains under Professor Rylan Lizares who awarded him his last colored belt on Friday, February 19. With a rich pedigree of submission wins over black belts inside the octagon, Holloway definitely more than deserves his new rank.

Max Holloway has been a professional MMA fighter for more than a decade now, with most of his time spent in the UFC. At one point he was the undisputed featherweight champion of the world, beating the legendary Jose Aldo to unify the interim title he already held at the time. During his stint in the octagon, Holloway has produced impressive grappling displays.

Namely, even though he just got his brown belt, he already has significant victories over the likes of Brian Ortega, Charles Oliveira, and Anthony Pettis. He also has a couple of submission victories, both via a guillotine choke, one over the highly treated Cub Swanson.

Currently, Holloway is in a tough spot, going 2-3 in his last five bouts. That, however, includes going up a weight class to challenge Dustin Porrier, as well as losing two back-to-back fights to current champion Alexander Volkanovski. He did beat Frankie Edgar and Calvin Kattar though, and has still a lot more to bring to the octagon given that he is not even 30 yet.

Now, Max Holloway also has a brown belt in BJJ, or as he refers to it, an upgrade. “A wise man once said. “All the time you put on the mat is one thing no one will ever be able to take away from you.” Got an upgrade in my belt yesterday but the work ain’t done yet. Let’s goooo

The fan-favorite is currently ranked as the number 1 featherweight, and number 8 in the pound-for-pound rankings.