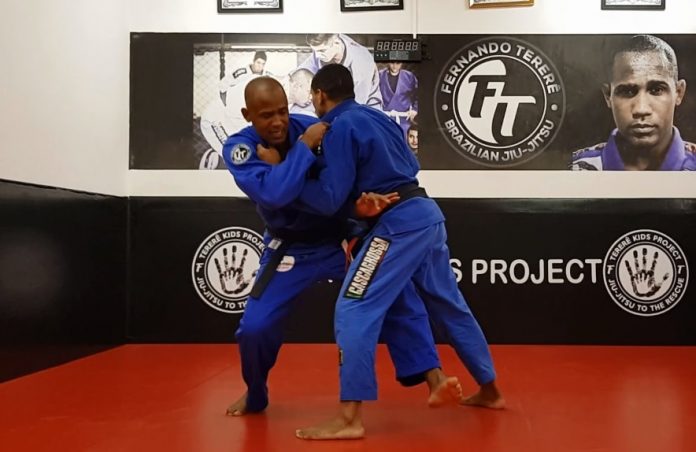 Very often we say that BJJ has not takedowns of its own, and everything we use is borrowed from wrestling, Judo, Sambo and the likes. That might have been true early on, but now, Jiu-Jitsu takedowns definitely exist and are different from anything other grappling martial arts have to offer. Sometimes they might be completely new, others, they might just be highly modified throws from other sports. In the sense of original takedowns, I often use pulling guard as an example. It takes the fight down to the ground, doesn’t it? When it comes to modifies Jиu-Jиtsu takedowns though, there’s plenty of really cool ones to choose form. One of my personal favorites is Safada takedown.

Why wouldn’t anyone want a takedown that’s proven to work? In fact, there is a BJJ takedown that has been proven to work at the highest possible levels of the sport. Not just that, but it was also successful against one of the best grapplers to ever exist – Roger Gracie.  And that’s not even the best part! The man that pulled it off against Roger, Fernando Terere, did so in the absolute of the Mundials, weighing a good 20 kilos (40+ lbs.) less than Roger. Interested now? The Safada is one of the best JIu-JItsu takedowns to surprise anyone, but people rarely seem to use it nowadays. That makes ti the perfect takedown to add to your game immediately!

The Safada takedown is a move that is often associated with a grappler named Fernando “Terere” Augusto. The takedown itself is actually a trip, or an inside reap, as they call them in Judo. In fact, The idea behind the takedowns is from an old Judo move. The Safada, however, has been modified by Terere to fit JIu-Jitsu needs perfectly, and remove a lot of the drawbacks the Judo version brings.

As a grappler, Terere has a very distinct style. The CBJJO, Pans and 2-time IBJJF World Champion is an Alexandre Paiva black belt that had one of the most exciting games ever. During the period between 2000 and 2004 Terere did a number on anyone that stood across him on the mats, including legends like Roger Gracie that was much heavier than him. He is famous for fighting not only in the absolute divisions but also in 3 classes above his weight. He brought about a lot of innovation to BJJ particularly in the areas of butterfly guard and Jiu-Jitsu takedowns.

The Safada takedown has its roots in Judo, as previously mentioned. The original name of the move is Kouchi Makikomi. It is basically a Kouchi Gari, that is quite used nowadays to cause off-balance, but done with your entire leg. Basically it is an inner leg reap that is not hard to understand, form a technical standpoint. In Judo, it is one of the higher percentages throws that you can do.

The Safada is actually a polished version of the Kouchi Makikomi that works even better than the original. Thank you Terere!

An Easy Way To Master The Safada

Technically speaking, the Safada takedown is one of the easier and most reliable ones available in BJJ. It is a Gi based takedowns though, which is probably its only drawback. That said, this takedown doesn’t require as much timing as most Judo takedowns do, and is easy to follow up, making it very low risk.

In Judo, the takedown works by getting a collar grip on the side where your opponent has a collar grip on you. In doing so, you place your arm over the arm of the opponent. The other arm goes under the armpit of the same arm, similar to an Ippon Seio Nage. This is where Terere made a huge change in terms of the Safada takedown.

The takedown (or trip) itself is a combination of a proactive and reactive takedown. The leg that is on the same side as the collar grip steps back, causing your opponent to step forward. That places their front leg in a trap because our other leg is ready to hook. As you hook the leg, your knee should end up behind the ankle as all your weight goes forward. For the Safada, you place your free arm on the opposite side of the opponent’s hip. This creates a frame that causes opposing forces on their leg, inevitably driving them to fall down backward.

This grip change by Terere is what makes the Safada one of the best Jiu-Jitsu takedowns out there. Instead of going under the armpit and exposing your back once you fall, the hip frame ensures you retain a positive top position. Not only that, but it also makes the takedown extremely difficult to counter, because you have direct leverage over the leg, controlling both the ankle and hip joints.

Finally a few words on training the Safada. Terere himself recommends that you start training with your opponent static after the initial first step. When you get the hang of the grip placement and weight distribution, you can add in some footwork drills, before trying to put it all together.

Just like with most things in life, BJJ techniques seem to cycle in and out of “fashion”. In the sense of Jiu-Jitsu takedowns, the Safada is currently not very popular. It is not that it doesn’t work anymore, it is just that people are trying to figure out some new things that are much more popular. If you ask me, this is the perfect time to train a takedown like the Safada.

Recycling “forgotten” BJJ moves is the key to the evolution of both our own game and the sport in general. This is what Matt Thronton refers to as “BJJ archeology”. It means digging up stuff that people do not use anymore and finding ways to learn from them or recycle them in a usable version again. the Safada, for example, is forgotten for no good reason. It still works perfectly, without the need for any adjustments whatsoever. The power of the Safada is in the fact that people do not use it, and have no idea how it works or how to counter it as much as they do a double leg, for example.

One interesting thing about the cycles of techniques in BJJ is that you can use them to expose holes. The initial grip placement of the Safada (collar grip), paired with the unique hip frame means you can take anyone down nowadays. There is a hole in the stand-up department in people not taking simply takedowns seriously. It may seem the Safada is easy to defend, but that’s just because you haven’t felt it done on you. This is the perfect hole to exploit by making the Safada takedown a staple among your Jiu-Jitsu takedowns.

One final notion to cap it all off. Remember that Jiu-Jitsu takedowns that are simple and straightforward, like the Safada are pretty much timeless. They will work against everyone, everywhere at any given moment, as long as you put in the hours and practice it a lot. That said, even if the Safada takedown fails. You have a great fallback option – pull guard. Getting to an X-guard variation, the 50/50 shin-to-shin guard is extremely easy, given where your bottom leg is placed.