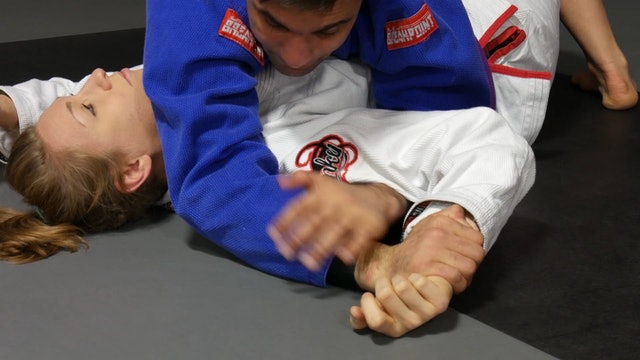 Everyone loves the half guard. But why? Is it because it is easy to play? Or easy to get to? In all honesty, the reason most people love the half guard, at least according to me, is because they can do a lot form both top and bottom, without having to waste too much energy. Let’s face it, BJJ folks like to be lazy. In fact, BJJ works best when done slowly and with tons of pressure. And yeah, you can apply pressure from the bottom as well, which is a subject for another article. That said, there’s another aspect of half guard that really appeals to people – half guard submissions. You can get them from top, you can get them from the bottom, and anywhere in between. In fact, there’s no type of submission that you can’t get from the half guard.

Half guard submissions are probably (I haven’t really checked) among the most utilized subs in Jiu-Jitsu. Come to think of it, if we include both top and bottom half guard, it may just be the position that offers the highest percentage finishes. Throw in all the half guard varieties and you have an entire game you could play for years and still have more to figure out. However, just like with everything else, some half guard submissions are simply better than others. Our focus today is on the very best moves you can do to tap an opponent out.

The Best Position For BJJ Submissions?

That’s highly arguable. The first position to go through your mind in this context is probably back control. Mount is also somewhere there, along with the modern Ashi Garami game. You’ll probably rarely hear people talk about half guard as being a favorite submission option. And yet, it is a position of relative safety, (if you know how to play, from both top and bottom, that offers more versatile submission options than any other position out there.

While all the other top submission positions like back control or mount bring you points in the competition, the half guard will only get you an advantage. But that is in terms of the point system. Half guard submissions will easily get you plenty of wins, and you do not have to go through the same defenses you do when hunting form them from positions like mount or back mount, and even Ashi Garamis.

The half guard is uniquely tailored to allow you to attack every possible submission category. You can go for leg locks, arm locks, and chokes without having to reposition too much. Moreover, you can hunt for all these submissions categories from both the top and bottom half guard. That makes playing bottom half guard one of the best options. Why? Just as you can pass the half guard by threatening with a half guard submissions, so you can sweep from the bottom by doing the same. The combinations here are endless.

Half Guard Submissions: The Arsenal

The arsenal of half guard submission you have at your disposal is huge. Most likely, you’ll like to specialize in one as you go through the ranks of Jiu-Jitsu. You can certainly do so, and use the half guard as the launching pad for your favorite submission, whether you’re an armbar, choke or leg lock type of grappler. However, the arsenal is much bigger than just one type of submissions.

When you’re looking at half guard submissions, you need to remove all the usual requirements you have of a submission hold. Certain moves, like the arm triangle, for example, are not the best idea form half guard due to the positioning of the hips. However, fro others, you need nothing more than just getting the correct grips. Moreover,r you can hunt for whatever you want from top and bottom, oftentimes switching between the two without letting go of the submissions.

First choice of a choke from the bottom half guard? The loop choke. This Gi choke is perfect for baiting people into coming toward you in order to pass. A sneaky collar grip makes the entry rally easy. Once you lock the other arm behind the neck, everything is pretty much over. A thing to remember is to place the forearm of the second arm as near the crown of the head as possible. This will make your loop chokes feel like an anaconda squeeze.

Top position half guard submissions mostly come in the form of Guillotines and front headlock ones. Here’ the guillotine is the best move to use. You can hit it from top and eve from the bottom. Moreover, you can use it to pass the guard at will. All you need to do is place a knee ins the opponent’s hip and go for that headwrap grip. From there on, it is smooth sailing if you’re patient.

Finally, an unusual choking option that you can easily pull off from both bottom and top half guard. The Ezekiel choke is a very effective weapon and is one of the most used half guard submissions form the top. Well, you can now do it from the bottom as well. If you’re using any sort of tight, clamp-style hip control, like the Lockdown, for example, you’ll be able to catch Ezelikes not only form the bottom but also without the Gi as well.

My personal favorite half guard submission from the bottom is the inverted armlock. There’s something about the half guard that makes people extended their arms, giving away submissions. The inverted armlock is right there for the taking any time somebody attempts to establish a cross-face. Simply catch the arm at the elbow, extend your hips and place pressure on the extended arm for a quick and very annoying tap. Works every time.

The Americana from top half guard is a real classic when it comes to half guard submissions. The far arm is the one you want to attack, and the goal is to simply place the Americana grip on. You can even do ti with the head trapped, ina catch wrestling style. Or, you could just finish like you would any Americana lock.

The Kimura is probably the best bet to hunt for, though, when it comes to half guard submissions. It works form the top, it works from the bottom, it works as a trap system to help you achieve other objectives… Whatever you choose to do, from half guard, top or bottom, just grab a Kimura. At the very least you’ll get a quick tap.

Speaking about leg locks, I’ll only use high percentage moves, which, of course, means going to Ashi Garami before doing any actual leg locking. Half guard variations come in handy here, like for example the butterfly half. That hook will allow you to achieve elevation, which in turn opens up Ashi Grami entries of your choice. A straight Ashi Grami on the free leg is the highest percentage scenario, though, Form there on, finish with any lock you want.

One of the best entries to an Ashi Garami is getting to the Inside Senkaku / 411 position from top half guard. This is one of those half guard submissions that take you away from the half guard for a second, only to open up both submission and passing opportunities. Whenever you’re battling a really tight half guard, a simple backstep will take you over the leg and straight int an Inside Snekaku / 411 position. From there on, you can have your pick of submissions or simply pass.

Yup, this is an article about half guard submissions, so I have to throw in a few things that are not as straight forward as the subs above. The first one is rolling back takes. The half guard top position is actually a great spot to hunt for back takes. The less conventional approach, though, is the one that will yield the best results. The tighter the opponent is squeezing their legs, the easier it is for you to place your shoulders on the ground and do a Granby roll. A back take or the Truck position will pop up immediately.

Neckties are also some of my favorite half guard submissions. While the most famous Peruvian necktie doesn’t really work form there, others, like the Japanese and German neckties, for example, do more than admirably. These choke-cranks will surprise anyone, and the best part is that they work because you’re located in half guard. If an opponent lets you pass you actually have nothing.

Half guard submissions are one of the main reasons why the half guard is such a favored position among grapplers. In that sense, the position offers extreme versatility, plus it offers you the chance to chain submissions together, to use them to pass and/or sweep. The best part is, that even if you sweep or pass someone from a submission attempt form half guard, in most cases, you’ll be able to actually finish the submission form top position. So, whatever submission you get a hold of from half guard, do not let go!