What is the first thing you and an opponent engage in when a match starts? Grip fighting. Every BJJ match, every BJJ roll, even every technique in class begins with holding your opponent. there’s no grappling unless you put your hands on your opponent. So, why do people underestimate this crucial aspect of Jiu-Jitsu?

Thinking about things logically, grip fighting should rank right at the top of fundamental techniques and strategies. Whether it is grip breaking or grip placement and holding, everyone should know how grips work. Add to that the different dimensions of Gi and No-Gi and you have quite a large subject to cover. However, in BJJ most people tend to brush off grip fighting and take it for granted.

Big mistake! When you grapple with someone, you have to get a hold of them. And in most cases, they won’t make it easy. So you need to know how to grip fight.

As you can see grip fighting is not a small part of BJJ. Actually, there are so many different grip fighting strategies from different positions that we’ll have to choose just one of them for our subject today. Since we already covered Grip fighting from the back, today is time to go over some fundamental. let’s look at how you should place your grips when you’re on your back in BJJ.

Black Belt Tips On Grip Fighting From The Back: https://bjj-world.com/grip-fighting-from-back-control/

In essence, there are two main principles of grip fighting from guard positions. One refers to the area of control you need to focus on. the second is all about making your opponent’s proffered gripping spots unavailable.

1. Control The Inside Space: The most powerful position of our arms is when they’re near our bodies.  Pushing and pulling motions are much stronger when your arms are tight to your torso. Furthermore, it is much harder for your opponent to manipulate your limbs as well. Whether it is Gi or No-Gi you need to keep your arms close and engage in grip fighting from there. Controlling the inside space is the most basic principle of grip fighting you need to know.

Let’s say you’re controlling your opponent’s sleeves with outside grips from the closed guard. They can move their arms with ease and use them to attack. At this point you don’t have an effective grip, you just have an attachment. Now grip behind the elbows or on the biceps. Now you have inside control and your opponent is going to have a much tougher time doing anything. First, they need to break your grips which will give you time to attack.

2. Deny The Opponent’s Grips: As obvious as this principle might seem, it is one that people very often ignore. However, this is even more important than the previous one. Look at it this way: no grips means no game. If you have grips and our opponent doesn’t than you’re the one who can attack at will. Now, in the world of BJJ things are never that black and white. So when you grip fight, you need to deny the opponent until you get your inside control grips.

When you imitate your grips the goal is to get solid control while preventing your opponent from establishing grips. This is the ideal scenario you need to look for in any match. Now, let’s get into which grips you want from the guard. The grips you have detriment which attacks are going to work best.

Collar And Sleeve Grip: We The collar grip is one of BJJ’s most basic ones. With this grip there’s but one rule – the deeper, the better. For example, you want your left hand deep inside the right lapel of your opponent’s Gi. Then, you’re going to look for the opponent’s left side sleeve with your right hand. Four fingers inside the sleeve, and  the thumb to lock everything in place.

What you get from this is control over the opponent’s limbs, which translates into posture control. As you know, posture is one of the most important BJJ principles. Controlling posture means you inhibit the opponent’s movement. That means you’re now attacking a stationary target which is much easier to accomplish.

Cross Sleeve Grips: These grips can offer you massive control over your opponent. Cross gripping is going to provide you with much more posture control and even help you take away the opponent’s base.

If you can grab your opponent’s right sleeve with your right hand, you gain rotational control. This might result in a very easy back take or sweep. What this grip offers you is the opportunity of a double attack – either get the back or perform a pendulum sweep. Your options are not limited to these two attacks though. Throw in a collar grip as well and you can attack with every closed guard submission there is.

The open guard is a whole different animal to the closed guard. When in open guard the opponent’s hips are much more mobile. This changes the grip fighting game significantly.

One thing you need to remember is not to rely solely on your grips in the open guard. Using your legs for distance is absolutely essential. That aside, there are two main gripping sequences to help you dominate from the open guard.

Sleeve And Pants Grips: Having a sleeve grip (or wrist grip in No-Gi) from the open guard means you’re halfway through a sweep. If you add in a pants grip to the mix you now have both the base and posture of your opponent. The grip is either on the heel, or the bottom edge of the pants. Controlling their leg and an arm means you can choose how to attack and they can’t do anything. 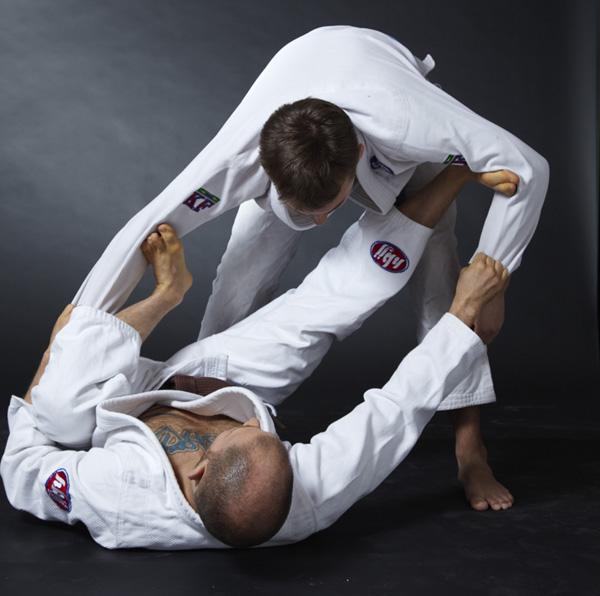 Double Sleeve Grips: These are the signature grips of Spider guard and other long distance guards. In reality, this grip is efficient far more in Gi than No-Gi. Many of the highest level competitors go straight for the double sleeve grips from their back. The idea is to control both arms of your opponent via the sleeves, which means you control their torso.  Furthermore, there’s no way for your opponent to get grips on you, so you have both grip fighting principles covered.  Even more important, there’s no way for them to use an arm to post which makes sweeping really easy.  The double sleeve grips are among your best grip options from most open guards. When you have the sleeves, all you need is a bit of work with your legs and you can sweep or slap on a submission with ease.