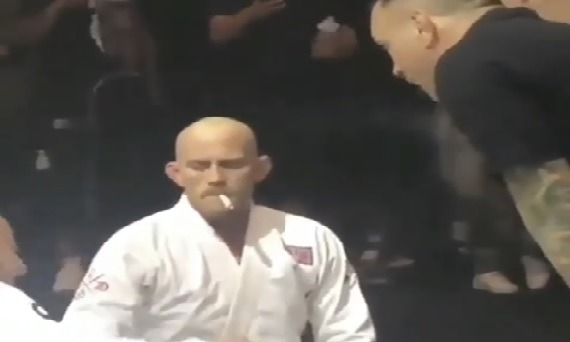 Jeff Glover is smoking weed with his opponent while Eddie Bravo as a referee is watching them on HIGH ROLLERZ BJJ event. What we have to ask ourselves is if weed is really good for the sport? Is weed upgrading your BJJ performance? Are you doing better while you’re high? Is weed good for promotion of BJJ or it’s just wrong?

OK, let’s just think a bit more about this video of Jeff Glover smoking weed. Just imagine that this is happening in some other sport? How about Wrestling, or MMA, Judo etc… Imagine some NCAA or UFC organized tournament with weed smoking? Well, you can’t because it’s impossible to even imagine something like that happening. Someone who would try doing something close to smoking weed in front of the crowd and cameras would be banned from sport and competition forever.

I think there’s no sport in the world that promotes smoking weed more than Brazilian Jiu-Jitsu. Guys promoting it goes that far saying that when you’re on weed you’re performing much better. While there’s no medical evidence or any other evidence that it’s true neither it makes sense people just keep saying it.

There’s a huge list of people promoting weed as a part of our sport it and the effect of it will be that kids will start smoking weed thinking that they’ll do better. They’ll start experimenting, they’ll start smoking before classes, after classes, in the middle of classes and soon they’ll smoke weed whenever they can.

I know many of you will say that weed is ok but let’s put that to a side if it’s good or bad. I’m not a doctor and most of you aren’t so we’ll leave that to them, but what about laws in countries? Smoking weed is forbidden in most of the countries in the world. Do we really want our kids to get in problems with the law because they started training BJJ and their idols are promoting weed and smoking weed between rounds as we can see in a video below?

Do you really think that most of the parents would let their kids’ train Brazilian Jiu-Jitsu when they know that their kids’ coach is smoking weed in front of them?

Don’t get me wrong here as I have nothing against people smoking weed. It’s their life and their choice! And yes there are some medical benefits from marijuana. But there are a time and place for that and sport definitely isn’t the place for promotion of weed no matter how good you think weed actually is. Even if it’s super great for your body and mind smoking weed can get you into many problems and one of them is problems with the law and other consequences.

The last thing we need is that weed promotes us. It’s much better for promotion to promote a healthy lifestyle and everything that goes with it.

So, all of you promoting weed as a part and culture of our sport just stop. You’re not doing anything good to BJJ and you’re just deflecting people and young guns from getting into it. It’s WRONG!