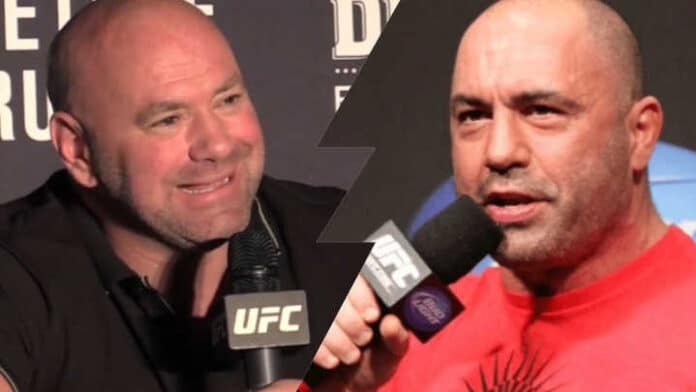 Joe Rogan may not be a part of the UFC in recent years, but for Dana White, he remains an important member of UFC and the MMA community in general.

The UFC has significantly reduced the number of times Rogan commentates. The most recognized voice in the broadcast booth now only does U.S.-based pay-per-views – and not all events deserve his expertise

He’s still an incredible standup comedian, actor, and podcast host who’s also well known for being one half (with Dana White) behind “The Fight Game” on Fox Sports 1 with Dominion Television Group which specializes primarily or mixed martial arts promotion fights

Rogan, who only worked six UFC events over the past year has been criticized by many fans. However, Rogan addressed those critics, and even though White thinks he deserves respect for helping educate fans about combat sports in general; other than Gracie family members-White says there is no one else more instrumental to popularizing the ground game of MMA as much like it was back then

A lot of people have had issues with Dana White’s response on Jake Rogan being overweight but what they don’t seem to realize or know is how integral this man really did when it comes down to having knowledge within mixed martial arts alone!

“Another guy who deserves a ton of credit for helping build this sport during our era is Joe Rogan,” said White on THE FIGHT with Teddy Atlas. “The reality is that when we got into this, everybody understood standup fighting no matter what happened.”

“I remember watching those early fights and thinking to myself: How are they going to understand these guys. The big thing for me was when it goes to the ground, how many people will really understand what’s happening”.

“I think it’s really cool that the main voice behind debates about jiu-jitsu is also a practitioner of this martial art. Joe Rogan was passionate about his sport, and he knew how to explain things so well.” – said Dana White

White, the UFC president and CEO of 7 years with a net worth over $500 million has also sought out Rogan’s help when he faced COVID-19. With monoclonal antibodies as part of his methodology to recovery from virus White said this is one time where you can’t put a price tag on saving your life or someone else’s.”