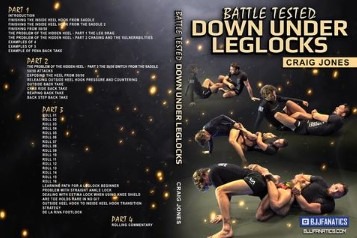 I’m a sucker for a Craig Jones DVD Instructional if ever there was one! And when the subject is leglocks, I doubt anyone can resist! Our favorite down under grappler is back with yet another installment in his BJJ DVD instructional series. Once again it is time to go into the world of heel hooks and foot locks. In this latest DVD, however, Craig offers something very different. This time around he heads to solve leg lock problems by offering real-world examples. This time, he shows the things that he does in high-level competition along with all the strategies and tactics that make them work!

To be honest, I really liked Craig Jones, ever since he burst on the No-Gi competition stage. Personally, I really became aware of him at the EBI that he almost won. Not long after he dominated the ADCC and instructional started coming out. So, far, there is not one Craig Jones instructional that has disappointed me. And I have them all. Still, as much as Craig sticks to his teaching style, this last Craig jones DVD instructional is different. in “Battle Tested Down Under Leglocks” Craig takes on a different approach to explaining things. The whole DVD has a structure that’s unlike any previous Craig Jones DVD instructional. Let’s go play by play and analyze everything Craig has to offer this time!

Craig has a knack for only choosing his best moves as subjects for his DVDs! Given that he is a really active competitor this is highly unusual. however, he still pulls his best stuff off, even when everyone knows what’s coming. That’s the mark of a true high-level black belt! Now, finally, he is back with yet another DVD, and on his arguably best ability – leg locking.

It has been quite a while since the last Craig Jones DVD instructional. usually, Craig doesn’t spend so long without producing some high-quality video material. the wait was worth it, though, as the result comes in the form of the four-part “Battle Tested Down Under Leg Locks” DVD. It is Craig’s fifth DVD in a line of some great instructionals. So far, we saw DVDs on the Z guard, guard passing, triangles, and leg locks. If you take a look at Craig’s competitive efforts you’ll see that these are exactly the things he uses regularly.

In the light of the September issue of the ADCC, Craig has upped his game considerably. And that includes his leg locking game. he has been incredibly active building up to this, fighting at every opportunity he got. We saw Craig grapple under the banner of virtually every major No-Gi tournament, from Quintet to Kasai Pro. During the time, his leg lock game seems to have grown as well. it may have something to do with his new training partners, but a lot of it is down to Craig himself! We are lucky that he decided to share all of his newfound leg locking wisdom with us now. But that begs the question, what does he have up his sleeve for the ADCC that we do not know about?

Vol1: Down Under leg Attacks DVD

Craig Jones, as most of you know, is a Lachlan Giles black belt. he trains with Lachlan down at Absolute MMA in Melbourne. Just like his coach, Craig flew somewhat under the radar, until he started winning world titles. After his impressive EBI outing, he immediately issued a leg locking DVD dubbed “Down Under Leg Attacks”. The four-part instructional was Craig’s first, and it was a real hit.

The first-ever Craig Jones DVD Instructional demonstrated Craig’s take on the leg locking game. At this time, it seemed Jones was the only one who cracked the Danaher Death Squad game, as nothing was officially out yet. Craig came out and spend a total of under 5 minutes in all of his matches put together until the final. There, he ran into a motivated Gordon Ryan and almost snatched victory from the King. His journey to the final was all leg locks and he did not shy away from showing exactly what he did.

The Down Under Leg Attacks DVD had one aspect in particular that nobody had covered before – leg lock entries. By then, we all knew what Ashi Garami was, and the major dominant positions in the leg lock game. This instructional really helped a bunch of people understand leg looks better, including me. Not to mention all the cool details on braking mechanics and the easy to apply leg lock counters! So, what does Craig do after a couple of years? he goes out and does a second leg lock DVD. How is it any different from the first?  Read on to find out.

Not that long ago, a video came out of Craig rolling with a bunch of people, using nothing but leg locks. While everyone appreciated it, nobody took it too seriously. it turns out, this was an introduction to what was to follow – the  Battle-Tested Down Under Leglocks” Craig Jones DVD Instructional.

So, what has changed in Craig’s game in just a couple of years that merits a whole new four-part BJJ DVD? There’s one main variable here, apart from, of course, experience. Ever since Gordon Ryan went up a weight division (or two) Craig has found a new home away from home in the blue basement that is Renzo’s NYC academy. there, Craig trains as regularly as he could with the likes of the Ryan brothers, Tonnon, and Danaher himself, Understandably, his knowledge of leg locks have gone up quite a bit.

Now, Craig’s improved and updated leg locking system is far from a copy of Danaher’s system. It is still Craig’s original take on leg locking, but it now includes certain new aspects and concepts that make it much more effective (and scary). Let’s go deeper into it.

After a short introduction, Craig kicks it off with everyone’s favorite leg locking position – the Saddle. First up, a twist (pun intended) on finishing the inside heel hook from the Saddle. Actually, there’s not just one, but rather two ways of improving your finishing rate. Simple, precise, and effective, typical of a Craig Jones DVD instructional.

It also seems that Craig has some newfound fascination with the 50/50 guard. In this volume, he starts with an introduction to the guard and proper positioning for leg locks. From there he moves on into what is my personal favorite concept in this new DVD – the hidden heel problem. here, Craig focuses on the various way in which you can expose the heel of even the most defensive-oriented opponent.

But that’s still not the best part. The best part is that Craig includes real-life fight examples of everything he is talking about. he uses excerpts from his matches to detail how the concepts he just explained work under the pressure of a live match. Invaluable!

As I mentioned, Craig has some brand new love for the 50/50 guard. However, it is not a revival of Ryan Hall’s 50/50 leg locks, but rather a brand new take on the original BJJ leg locking position.

In the first half of volume two, Craig goes over his brand new 50/50 guard formula. How does it work? Well, first of all, by heel hooking people. Craig offers a few heel hook attacks, again removing major problems out of the way, the likes of heel exposure. Moreover, he covers some neat counter leg locks and leg lock defense from the position as well.

The second portion of volume two moves on to the option of arriving at the back from the 50/50. it turns out, there are great ways of getting them back from virtually any direction. Notable chapters include an outside back take, crab ride, back step back take, and my personal favorite, reaping back take.

At first glance at this volume of the Craig Jones DVD Instructional, you notice the number of chapters straight away. there are 16 chapters, to begin with, each of them a different roll between Craig and different opponents. What is common between them all is that Craig does nothing but leg locks. he does everything he covered in the previous two volumes, clearly showing how the things work in different live scenarios.

The second portion of this volume of the Battle Tested Down Under Leglocks DVS has a further 7 chapters. They cover the solutions to common problems by answering some of the most common questions people have about leg locks. Included here is advice on how a beginner should start developing their leg lock game and problems in terms of specific leg locks. You’ll get answers to questions like “why doesn’t my ankle lock work?” and “Are toe holds effective in No-Gi”? Moreover, Craig covers great ways of countering the Estima lock and some strategies on transitions between different leg locks. A smooth De La Riva foot lock caps it all off.

The part I love the most about modern-day BJJ instructional DVDs. Not all of them have this feature, but the ones that do really help put things into perspective. Since leg locking is anything but simple, the portion where Craig explains what he does during rolling is priceless. Here, you get close to an hour of rolls, where Craig does leg locks from top, bottom, and virtually anywhere. The is all followed by some precise commentary by Craig himself. During the commentary, he explains what he is doing, what he is thinking, and what the goal is with every little movement he does. It really is the best way to end such an awesome BJJ DVD as this one.

Should you get this Craig Jones DVD instructional? Of course, you should. You should get all of them, for that matter. However, if you need a place to start exploring Craig Jones DVDs, this is the best one to date. And no, having the first volume of “Down under Leg Attacks” is not a prerequisite. It does help, though, and a lot! get “Battle Tested Down Under leglocks” and you’ll become a leg locking machine. Get both Down Under Craig Jones DVDs and you’ll be unstoppable, no matter who your opponent is.