As far as open guards in BJJ go, not many are used more than De La Riva guard variations. Basically, you can connect De la Riva guard to anything and get a hybrid open guard. De La Spider guard, De La Worm guard, and the likes are quite useful ways of innovating from open guard. Another is simply reversing the control. Reverse De La Riva guard might not be as fancy as other variations, but it is undoubtedly efficient. For those looking to dominate opposition from the guard without complicating things, RDLR is the way to go. The man to teach it to you is Seph Smith and the teaching tool of choice is his Reverse De La Riva Almanac 2018 Edition DVD set.

Ever since the Mendes brothers started spinning left and right from the De La Riva, this old-school guard got a resurgence. Berimbolos suddenly became a craze and spread through the BJJ community like wildfire. Soon everyone was trying to roll around their opponent, looking for back control. This resurgence of the De La Riva saw the guard evolve into a whole family of sub-positions, some more effective than others. In terms of application in both Gi and No-Gi as well as simplicity, hardly any of them is better than the Reverse De La Riva guard.

So, you should probably get down to AOJ and learn the secrets of the De La Riva tradecraft from the Mendes bros, right? Well, not quite. There’s a great resource out there, and a brand new one at that. Even better, the instructor is one hell of a teacher. His name is Joseph Smith and he is an expert when it comes to the Reverse De La Riva. If you truly want to understand the position, and eventually master it, then the “Reverse De La Riva Almanac” DVD is for you.

Who Is Seph Smith?

So, you’re probably asking yourself who this Joseph “Seph” Smith is? Let me refresh your memory. Remember Ryan Hall? Sure you do, he is the guy whose DVD instructionals are mandatory learning material for any student of grappling martial arts. IF you haven’t seen anything from him you’re either new to the game or you’re doing something wrong. Now, back to Seph Smith. Remember the guy who is Ryan Hall’s assistant across most of his digital releases? Well, he also happens to be Hall’s first-ever black belt and the main culprit behind the RDLR Almanac DVD.

Seph started his Jiu-Jitsu journey much like many of his contemporaries. In 2001 he only knew he wanted to train martial arts so he did. JKD, Kali, Muay Thai, BJJ, he dabbled in everything. It turned out, however, that grappling was the best fit for him. he shod grat dedications from the beginning, traveling 2 hours in one direction just to train. He met Ryan Hall at Lloyd Irvin’s academy and when the phenom decided to leave, Seph followed.

As Ryan Hall opened 50/509 Jiu-Jitsu in Fall Church, Seph stayed on as a teacher. Ryan awarded him with his black belt and Seph stayed helping him with the academy and his DVD releases. A few years back, Speh decided to open his own academy, Upstream BJJ in Richmond, Virginia where he teaches at present.

INtroduction out of the way, it’s on to the meat and potatoes of the DVD. Why this exact DVD? Well, there are a few reasons to go for it, to be honest, even before you know what’s inside.

The first reason to go get this DVD is the subject matter. The RDLR got shunned to the side in light of all the le lock madness in the past few years. This was due mainly to the fact that the regular Reverse De la Riva opened up leg attacks for the top person. Well, this might’ve been true a few years ago, but not anymore. The RDLR evolved, just like everything else that works in BJJ and is now past that particular problem. This means that you have a very potent guard that is not complicated to learn and works against opponents of all sizes. With Seph Smith’s help, you’ll also make it un-passable and turn it into an attacking position.

The second reason is, of course, the coach. Any Ryan Hall black belt is a great choice for me, and especially his first one. Seph has a very similar teaching style to Ryan, focused on details and fun to listen to. Just like him, Seph has the ability to point your focus to what truly makes or breaks the position, and has a conceptual approach to BJJ.

Finally, there’s production. The “Reverse De La Riva Almanac” is a two DVD set with a total running time of 215 minutes. That’s nearly four hours of highly detailed RDLR material to make you a true master of the position. Furthermore, the production is clean, the chapters are marked very precisely and there’s zero dead time.

DVD 1 – The Half Guard Shell

This RDLR instructional starts slow. In fact, it starts so slow that you have to wait until DVD #2 to actually learn about the Reverse De la Riva. And this is exactly as an instructional should be. Seph kicks things off with a position that is essential for developing a killer RDLR – the half guard shell.

After a short introduction, Seph describes the half guard shell in a precise and extremely detailed manner. He focuses on the things that make this guard work, and how to maintain it with ease as a go-to defensive position. After all, there’s no guard game without a guard recovery strategy! 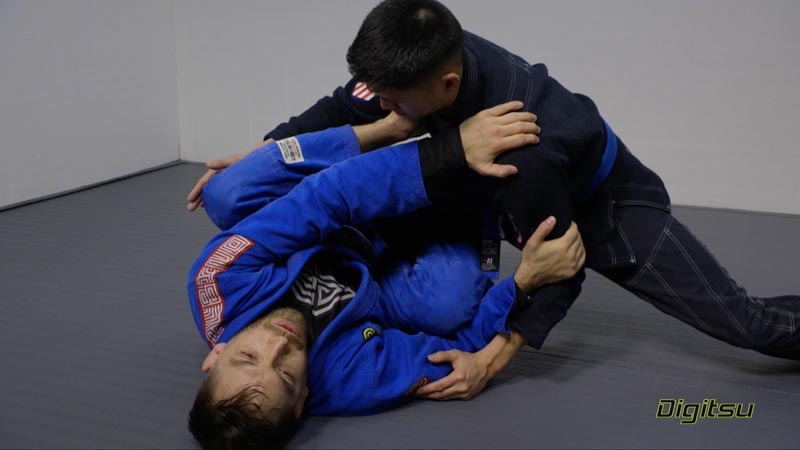 When the mechanics of the guard are clear, it’s time to move on to more attacking setups. The first in this progression are sweeps, namely a Marcelo Garcia inspired sweep that works like a charm! Following suit are great combinations that include off-balancing, sweeping and submitting your opponent. Very useful chains that make sense and are extremely easy to follow.

The half guard shell is the perfect base to build an RDL game upon, and Seph explores every sweeping option before moving on. Seph uses a BJJ classic – the underhook to open up half a dozen sweeping opportunities that require next to no energy to complete.

Finally, time to start messing around with the RDLR! The second DVD is noticeably longer than the first, as it goes deep into the world of De La Riva. It picks up right where the previous volume ended.

Seph offers a complete system by connecting the half guard shell directly with the Reverse De la Riva. After some basic configuration notes, Seph goes straight into attacks. There are all your basics sweeps from the RDLR as well as the essential Omoplata setup. However, once the basics are out of the way, Seph opens up brand new horizons.

Namely, he begins with the Jedi mind trick Ryan Hall loves so much and offers unique concepts around the Leg Drag. From there it gets really interesting. Berimbolo back takes, reverse half guard attacks and the awesome Long Hook concept are just some of the features that are going to revolutionize your guard game.

Finally, Smith wraps up this great DVD with a few concepts on pass prevention. The RDLR’s one big weakness, apart from leg locks, was the leg drag pass. Seph offers a great solution to this conundrum along with a footlock for good measure.