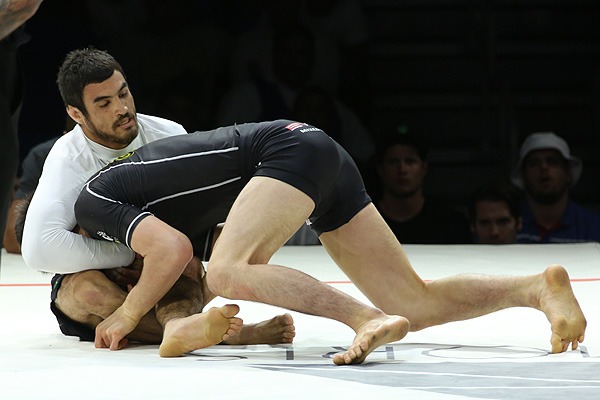 Getting submitted is not an easy thing to get over. The whole “there’s no ego in BJJ’ thing aside, nobody likes to get submitted. Whether you’re a beginner or a fairly experienced grappler, submission is the one thing everyone hates. As it should be, of course. A submission is the ultimate form of surrender and nobody likes to lose. As far as submissions go, probably the scariest category is choked. That familiar feeling of going through the tunnel is not something people like to experience. And there’s one tight choke out there that can make this unpleasant experience to a whole other level – the guillotine choke. So, let’s focus on understanding it and discover a guillotine choke escape that’ll get you out of this dreaded submission.

The guillotine choke is one of the “basic” techniques in BJJ. people learn it fairly early in their journey, especially if they train mostly No-Gi. The trouble with the guillotine choke is that it is both efficient and painful, due to its mechanics. namely, it follows all BJJ principles: strong position, a high degree of control, and plenty of variations and follow-ups. For those that know it, it’s an almost certain way of finishing a match. To put it short, getting caught in a guillotine spells trouble. Luckily there is more than one guillotine choke escape, and there are also counter submissions to consider.

Escaping the guillotine is not an easy task precisely because of all the variations of the choke. Getting out of a Marcelotine is not the same as escaping an arm-in guillotine choke. And there’s the standing guillotine as well… All this variety means that you need to primarily understand how the choke works before you look to escape. Once you know how the choke works, you can do the needed adjustments that are going to get you out of danger

Learn further ways of escaping the Guillotine as well as any other submission you can think of! Tom DeBlass has the pedigree of an un-submittable grappler and shares all his knowledge in detail through his “Submission Escapes” DVD. Check it out and never worry about being in a bad spot again!

The guillotine choke is a tricky one. It can double as a blood choke and as an air choke, which makes it very difficult to defend against. Furthermore, these two variations are easily interchangeable back and forth, constantly tightening the choke. For that, you need to identify three main areas and systematically work to block each from working if you want a guillotine choke to escape to work.

The first threat during a guillotine choke is the opponent’s arms. Regardless of the type of guillotine, the grip under your chin is crucial, as it provides the connection needed to complete the choke. Break this connection, and there’s no leverage to finish a choke.

Secondly, body positioning. The guillotine requires your opponent to be in front of you, which leaves your hips more or less open for movement. Not many people can finish the submission like that, so control over the hips and your posture is crucial. Your opponent is going to look to utilize their legs in order to keep your hips from moving. If they know what they’re doing, they’ll place the legs so that they make counters really difficult as well. This is a second thing you need to address because if you can’t get out of the position, an opponent can re-grip and still finish.

Finally, you need to understand direction. There are some directions in which you simply cannot move unless you want to tap or nap. So, you need to familiarize yourself with the execution of the guillotine, so that you can understand where its weak spots are. Moving the wrong way is going to ensure you’ll tap out. Also, be wary that your opponent is probably going to try to funnel you in such a direction deliberately.

Dealing With The Guillotine

First things first, the “regular” guillotine. For this, the opponent has a grip established around your neck, gripping underneath the chin. Both your arms are free in this scenario, which you’re going to use to your advantage. Let’s start with a guillotine from the guard.

Your first step is relieving pressure on the neck. To do this, you need to pull the opponent’s arms away from your neck. Since their grip is in the way, you’ll only be able to create a little space. To begin with, use the arm that’s on the choke side to hook the palms of your opponent. The goal is to pull your elbow towards your hips, not towards the ground. This is a more powerful configuration of your arms as opposed to pulling downwards. To further relieve pressure, get up on the balls of your feet and push forward.

This brings you to the second step – breaking their positional structure. The fact that your second arm is free is huge here as it’s going to help you establish an even better position. Simply place it around the opponent’s neck (like for side control) and keep your shoulder close to their head. To do this you’ll need to place your head on the mat, which is further going to relieve pressure. You can now release the wrist grip to push on their near side leg and open the guard.

Finally, remember to move towards the opposite side of the choke. Otherwise, you’ll just choke yourself unconscious.

This is a guillotine choke variation in which the opponent has your arm stuck in their grip along with your neck. This can make it particularly hard to resist as they’ll be pushing your shoulder into your neck in addition to direct pressure with the arms. So, we follow the three steps we outlined before. For the sake of simplicity, let’s say you’re already in a full-blown arm-in guillotine from the closed guard.

The first step is wrist control. Once again, you’ll look to control the opponent’s wrist with one arm only. This time, it’s the arm that’s free. Once you grab the wrist take your elbow in to have breathing space.

The second step requires a bit of clever positioning on your part. For starters, you need to try and keep the trapped arm’s elbow as close to your body as possible. This further reduces the choke’s tightness. In order to achieve it, you’ll have to place your arm all the way back, palm on the floor. Next, you need to look away from your opponent as much as possible. Only then can you think about moving.

In order to defeat their structure, you’ll need to shift your body to your side(opposite of the choking side). Remember to constantly stay on the balls for your feet. To break free, you can release the wrist control and push down on their hip which is going to land you straight into side control. That’s where you’re safe from a guillotine.

In the case of the standing guillotine, you can skip the first step. There’s no need to go for the wrists, as you’ll utilize an angle change to deflect pressure. To achieve this you first need the space to move. The first thing to do when in a standing guillotine is to get your hips back and place your arms on the opponent’s thighs. This will open a V-like shape in front of your head.

Next comes the angle change. In order to beat the guillotine, you’ll need to use this V-like space to thread your head all the way to the other side of the opponent’s body. This renders their guillotine useless. Simply put your hands around their waist and you can get on their back.

The goal is to place your shoulder (that’s already close to their neck) directly on their carotid artery. to achieve it, you need to be on the balls of your feet. Another crucial thing is that an opponent has to keep hold of the guillotine grip. If they let go, you’ll most likely fail to finish. In any case, the Von Flue choke is a powerful submission and if you time it right you can get a tap in a second.