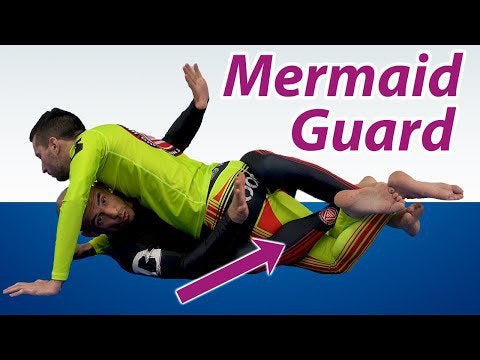 What is your favourite guard to play in BJJ? Better yet, how long have you been playing it for? We all have our go-to positions in BJJ, but the problem is, we tend to become really comfortable with them. this is a two-sided word though. The more comfortable we are with a position, the more we tend to slack with the details. At the same time, people are getting used to using playing it and figuring things out. So, refreshing your BJJ game with a new Jiu-Jitsu position from time to time is the perfect way of keeping your options fresh and your opponents guessing. The Mermaid guard is just such a position.

In most cases, I tend to be a bit skeptical for new BJJ guards. However, a big fan of the lockdown half guard, I can see the potential uses of the Mermaid guard immediately. The guard also utilizes a powerful principle that just recently clicked with me. In other words, its new Jiu-Jitsu position won’t require you to rethink your entire game or have to learn some crazy new movements. It is just an adjustment to something we’ve used, and it opens up the door to plenty of options and future developments. Who knows, it may just turn out to be your next favorite secret weapon.

The Element Of Surprise

Even ancient battle strategies cite the element of surprise as an important tactic in warfare. In a sport like BJJ, where you are trying to throw pretty much the same things at a person that they are trying to throw at you, it is basically all about who can surprise the other person with cunningness and technique. As such, the mermaid guard plays directly into this approach.

What you want to do when introducing a new Jiu Jitsu position to your game is not just go for it all the time. You probably won’t get it to work that way. Instead, you need to be looking at introducing the position to your own game, setting it up from different spots, and getting all the benefits without your training partner or opponents being any the wiser. As they are left guessing you get to both figure out different uses for your new secret weapon(s) and put the reps in.

When it comes to playing guard, people are usually wary of sweeps and submissions. After all, they’re the only offensive options you have from the bottom. Manipulating other aspects such as base, for example, is easier to sneak through and even the most diligent top player will have a hard time fending off the Mermaid guard once you start entering into it from everywhere. While the mechanics of the guard are sound 9as you’ll see further on), it is the element of surprise both in terms of the guard’s structure and entries that really makes it a very promising position in both Gi and No-Gi BJJ.

The mermaid guard, roughly explained is a lockdown done on both legs instead of just one. I only say this to get an idea of how it looks into your head. This Jiu Jitsu position is a lot more intricate than just locking both legs down. As every lockdown player will tell you, it is not just about lying there and swinging your legs. The fact that you are locking both legs down with a specific structure means you’ll have a tendency to go on your back – that is something you should avoid doing in the mermaid guard. Instead, look to be at an angle, like for a side guard, in relation to the opponent, when placing the double leg lockdown to enter the guard. The positioning of the arms varies in relation to the direction you want to go into, but a low placed underhook (hip level) is something to look for whenever possible.

The options from the Mermaid guard are mainly sweeps. The fact that you have both legs tangled mean you have a huge advantage. Controlling both legs means you pretty much have the base of your opponent completely under your control. That makes sweeping available in two directions, mainly to the sides, just like from half guard but without the potential that the top person will post or transition into a leg locking position. Moreover, once you use underhooks and some intelligent tie-ups you will see that sweeping overhead and diagonally also open up as opportunities.

Getting to the Mermaid guard is available from plenty of positions. The lockdown and half guard variations are an obvious choice, However, you can also get there from the closed guard as well, either directly, or by heading for the Mermaid sweep setup against a standing opening. Let’ not forget that plenty of modern leg locking transitions also open up the chance for you to tie up both legs, as do other half guard variations like the fishnet.

What’s Cooking Under The Sea?

One of the greatest advantages of the lockdown, in my opinion, is that it can be just as useful from top positions as it is from the bottom. This is just a teaser as to where the Mermaid guard could lead in the future if we try and apply the principles to other situations. Basically, as I said, the mechanics of the guard and the element of surprise make it a very potent weapon. In terms of mechanics, it is ht fac that you get both legs together, and you lock them down with a very powerful hook.

This opens up a whole new can of worms though, for people who love to experiment. LEg locking entire, going inverted in terms of controlling both legs, trying to control from the top, looking to tie up the arms with a lockdown-like configuration… the options are endless it just took someone like Wim Deputter to get the ball rolling. Knowing how creative he is, I do not doubt he has even more ideas in mind of where to take the mermaid guard.

The best thing though is that we also have a chance to experiment with a new Jiu Jitsu position. Jumping on the te train early means you get to have a better understanding of it, as it will inevitably catch on. That, and it is a lot of fun to mess around with it (tried and tested in the gym, albeit shortly, given how new the concept is, at least to me).

The Mermaid guard might not end up in the latest Gracie Barra curriculums, but ti is certainly a fun option to explore. It may give birth to a full system and end up being a guard of its own, or it may just stay as a surprise option from the bottom that gets you an easy sweep and a pass to mount or the back. In any case, it is not something to disregard, if nothing else, simply because it is easy for everyone to do it and it has a sound mechanical and tactical foundation. Simply put, it makes sense.