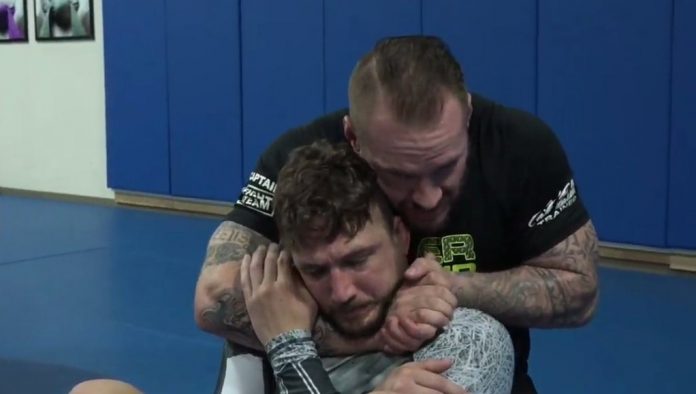 Choking people out is a daily thing in BJJ. In fact, the art/sport has so many different ways to choke a person unconscious, that it can be downright scary when you come to think of it. Still, if you’ve ever tried pulling off a choke in a roll, or a match, you know that it can be a notoriously difficult thing to get. It is not hard to see why that is the case, given that people know what you’re after from certain positions and will do their best to thwart your efforts. A great example is choking from the back, with either a Rear Naked Choke or some variation of a collar choke. Both are very hard to get, mostly because they’ve been used so much. The short choke BJJ strangle, though, is an entirely different story.

The short choke BJJ submission is like something out of a movie. It is so simple, that it should probably not work. And yet, it does work, and it works perfectly, I might add. It is one of the favorite ways to strangle people of Marcelo Garcia, and we all know that anything Marcelo likes is very worth looking into. This particular choke is the perfect fallback option if you’re failing at an RNC/collar choke from the back. However, it can also serve as a checkpoint when setting them up.

The Hardest Thing In BJJ – Finishing From the Back

I really do tend to throw this “hardest thing in BJJ” phrase a lot, don’t I? I’ve used it before when describing guard passing, and on occasion, in regard to other submissions, or even guard retention. It is true, they’re all hard. In fact, BJJ is hard! That said, submissions are truly the most difficult task to accomplish, especially when it comes to tapping out a seasoned opponent. Since winning by submission is what everyone’s after, people tend to be really stubborn about giving those up.

The second highest percentage finish in Brazilian Jiu-Jitsu (after the armbar) is the Rear Naked Choke. As the name implies, it is a chokehold done from the rear, or as we like to say in BJJ, from the back. Back control is a tough spot to get out of, mainly because of three things. One is the rotational control of the hips, the second is the similar control over the shoulders and the third is the constant threat of submission, mainly consisting of strangles. The Rear Naked Choke ranks the highest among them, and for a good reason – it works. However, the more we try to use it, the harder it becomes to get the finish. The choke still works perfectly, but people are wising up to the setups and mechanics more and more, making execution harder.

One reason for this is that we do tend to overcomplicate things in BJJ. Yes, having plenty of steps and entails on how to place every fingertip is cool, but at the end of the day, it is supposed to achieve a goal – put someone to sleep. All the micro battles form the back are resulting in us becoming less and less effective at doing what was originally intended – submitting someone. That’s where moves like the Short choke BJJ strangle come in to play. Those are moves that I like to call “flash” submissions. They work in an instant, without too much fuss and physics. Simply put they get the job done when the fancy stuff fails.

The Short choke is a BJJ submission move that is painful, effective, extremely hard to defend, and very easy to set up. Sounds like the perfect move, doesn’t it? The thing is, it only works like this because it is an auxiliary move to the more established Rear Naked Choke and all the collar strangles we do from the back. That means that you should have it in your arsenal, use it whenever needed, but don’t go for it as your first move. Otherwise, people will just get used to it, much like they are used to your RNCs by now.

Mechanically speaking, the short choke BJJ submission is just that – a short choke. To finish it, all you need is a forearm across the neck. No need to go deep, hunt for elaborate grips or look to cling on to a Gi. One main difference is that this choke is more of a crushing choke than a blood choke, give n that the forearm runs across the throat. That introduces a factor of main that is missing with other chokes from the back. In fact, it is similar to the bow and arrow, just more direct and brutal.

Finishing the Short choke BJJ strangle requires you to get a palm to palm grip over the shoulder, and place the elbow of the free arm behind the back. This creates a very powerful structure that an opponent can’t break out of. Moreover, it amplifies the strength of the choke, which you could finish even with one arm if need be. For a tight finish, it is not just about the squeeze – you also need to pull across, in the direction of the elbow of the arm that’s across the throat.

Introducing The Short Choke To Your Game

How do you add the short choke BJJ submission to your arsenal of back attacks? There are actually two great ways of adding it to the hooks and seatbelt back control we all love to use. One is when you can’t manage to get the Rear Naked Choke because the opponent is grip fighting too much. Whenever the arm can’t go across all the way over the shoulder, you should opt for the short choke instead. Having a seatbelt means you can get the forearm across the throat at any time.

Another option I really like to use is to fall back to the choke when a collar choke fails. For example, I like to try and set up a Rear Naked Choke even with the GI. If for some reason it doesn’t work, the collar is always there so that II can transition into collar chokes. If those fail, once again, there’s a backup – the short choke BJJ strangle. The thing is, this one rarely fails, or it just opens up one of the other two options, creating an endless loop from hell that will eventually lead to a tap.

Also, you could consider using it from other back-related positions, like the Crucifix, for example. Especially in No-Gi, where you have fewer handles to hold on to from the Crucifix, the short choke makes a real difference. All you need is to sneak the forearm across the throat, which is much easier than with any other choke. Once you have it, you could even be creative with how you grip with the second arm, so that you don’t lose control over the opponent’s arm trapped in the Crucifix.

The short choke BJJ submission is one of those flash moves that can make the difference in any match, even if it is against higher-level opponents. It is unexpected, difficult to defend, and requires no very little time to learn. As such it goes against the grain of intricate and complex BJJ submissions, and I more of a catch-wrestling style sub. However, when you put effectiveness first, this choke really starts to shine. Give it a try!