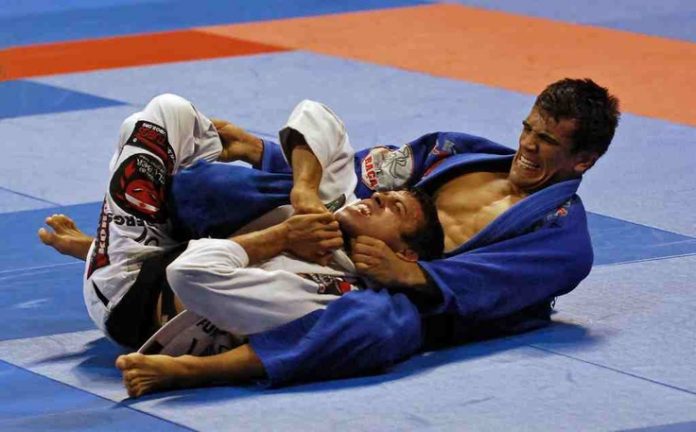 When I first started BJJ I had some basic knowledge of chokes, given my Judo Background. As a white belt, I thought I couldn’t be surprised by chokes that involve the lapel. To put it mildly, I was wrong. There’s no comparison between Judo and BJJ in terms of the depth of collar choke variations. Both of these grappling martial arts rely heavily on the Gi, especially the top part of it. Despite great controlling options, the Gi material is a very dangerous weapon for those that know how to use it. So, imagine my surprise (and lightning-quick tap) when I first got caught in a Bow And Arrow Choke.

As far as Jiu-Jitsu collar chokes go, none is more of a staple of the art than the Bow And Arrow Choke. Not to take anything from other collar and lapel chokes, but the effectiveness of the bow and arrow choke is undisputable. This is largely due to the positioning and high degree of control that one has when executing this beautiful technique. As such, it is almost entirely exclusive to Gi BJJ, since it requires the use of a collar. Notice how I said “almost”. Read on and you’ll discover a No-Gi bow and arrow variation that’ll have you running towards the academy to give it a shot!

Do You Know How The Gi Became Such A Huge Part Of BJJ? Here’s The Answer: https://bjj-world.com/jiu-jitsu-gi-bjj-origins-samurai-gracie/

As with many of the Gi related BJJ techniques, collar chokes came from Judo. All choke techniques in Judo are known as Shime-Waza (choking positions) In Kodokan Judo circles, the collar chokes are categorized under the name  Okuri-Eri-Jime. These include the loop, clock and a variation of the crucifix choke. More along the lines of the bow and arrow choke, Judo collar chokes often utilize control of the pants when hunting for a submission.

The bow and arrow choke (Berimbau in Portuguese) derives its name from the specific choking position. Namely, for this choke to work, a grappler needs to be behind their opponent, with one arm grabbing their collar around the head. Since an additional grip on the pants is also required, the body has to be angled towards the opponent’s hips. The result is a bow and arrow-like position of the arms, hence the name.

This attractive position is the reason why the bow and arrow choke has become a mainstay in BJJ culture. It is a common subject of all kinds of BJJ related artwork like photographs, graffiti, tattoos and t-shirt designs.

The Bow And Arrow Choke

The bow and arrow choke is a very technical choke. It is usually part of the fundamental curriculum but remains an often re-visited subject during classes. It is one of the highest percentage submission in BJJ, and on top of the chokes category, along with the rear naked choke. A large part of the choke’s effectiveness is due to the fact that it is executed from the back position, considered to be the most dominant one in grappling.

Technically speaking, the starting point of the choke is getting the collar grip. The goal is to get as deep of a grip as you can while having the opponent’s back. For the grip, the thumb needs to go on the inside part of the lapel. The area of your gripping hand that is under the thumb should end up under the opponent’s chin. A cool trick to remember is to always look to turn the edge of the collar upwards by twisting your wrist in a forward manner. This creates an arrow-head-like structure that goes under the chin really easily, but cannot be pulled out.

Once the choking arm is in place, it’s time to think about changing the angle. The idea is to open release your back control hooks so that the leg that is on the same side as the choking lapel goes across the opponent’s body. that is going to get your free arm closer to their leg. The point is to grab the Gi pants on that leg at the level of the need of the knee. For top control, it’s paramount to focus on gripping the outer part of the Gi at the knee. For a finish, all you need to do is ext3end your hips while leaning back.

Variations For Every Occasion

Passing into a bow and arrow choke is a dream combination. Rafael Lovato Jr, one of the top American black belts, walks us through this one. He starts things off with an X-pass and reacts to his opponent turning as a defense. During the turn, Lovato gets the choking grip on the collar and threads his foot under the opponent’s hips. The hook allows you to control your opponent while you get the second hook in. From there, it’s just the regular bow and arrow finish.

Attacking the armbar is a very viable option from the back. However, BJJ works in every direction, so you can go for a bow and arrow choke off an armbar attempt as well. From the basic armbar position, it is important to keep control of the arm with a Kimura grip. While doing so, make sure you pull off your own lapel that is on the side of the opponent’s head. Keep the free end of the lapel in your arm and take off your leg from their head. From there, just add the lapel to your other arm and you’ve got a tight choke!

A rolling bow and arrow set up from the turtle position is as attractive as this choke gets. Actually, one of the best times to sink in a submission is during transitions. It is very important to keep the hips low and have a deep and secure collar grip before looking to roll. The roll itself is a front roll and is the most difficult part of the technique. Just remember that the aim is to get both your shoulders on the ground at the same time after you roll. Also, the leg of your opponent shouldn’t be out of reach once you finish the roll. The finish is as described above.

For the No-GI cherry on top of the choking cake, here’s a very cool variation of the bow and arrow choke. The beauty of this one is that it is a No-Gi version of this popular choke. It is a really cool option to have when an arm triangle attack fails. Key details are how you lock your fingers and keeping your arms relaxed as you apply the choke.