What do you need to be a complete competitor in Brazilian Jiu-Jitsu? You need to have a well-rounded game, particularly in the guard department. If you can sweep and attack from the bottom, and pass at will from the top, you’re likely to have a lot of success at any type of tournament. Developing such a well-rounded game does take a lot of time and effort if you take the usual route. However, if you want a faster way to achieve top competitor status, maybe you should consider the brand new Abmar Barbosa DVD “Jiu-Jitsu Outlaw”. It is a great way to help you learn competition strategies form one of the best competitors of our time.

It is always ways to learn competition strategies from proven competitors. However, learning from the “Jiu-Jitsu Outlaw” himself is a whole different experience. Barbosa is certainly one of the slickest competitors out there, particularly when it comes to playing open guards. It is not just enough to have a guard game, both top, and bottom that you think is going to work. You need proven concepts and high-percentage techniques if you really want to break into the top competitors of your division. And, when it comes to complete resources that cover every basis, you won’t find a better one than this Abmar Barbosa DVD instructional.

You probably already know the name Abmar Barbosa quite well. He is one of Robert Drysdale’s top black belts. Until a while ago, he was also an affiliate of Drysdale but now runs his own Abmar Barbosa Jiu-Jitsu school. The 36-year-old Sao Paolo native started BJJ as amens of self-defense. Soon, he fell in love with the Gentle Art and ended up moving to the US after he met Drysdale in Brazil. They formed a connection and Barbosa got to learn the secrets of the trade from one of the best grapplers alive.

Barbos was always a competition minded grappler. He amassed a huge number of JIu-Jitsu titles (nearly 50) on his way to his black belt. It wasn’t until the 2010 Pans that he really exploded. This was mostly helped by beating Kron Gracie 11-0 in the opening match.  He also added Lucas Leite’s scalp to his collection, but failed to win gold and had to settle for a silver medal. However, his legacy was written.

Barbosa is actually a very aggressive competitor that competes at Medium weight. He is predominantly a Gi grappler and his favorite spot is the open guard. Actually, eh like to work from pretty much any guard position, including the closed guard. Moreover, being so proficient ant attacking from the guard, he also has a very unique way of passing it. IN the brand new Abmar Barbosa DVD you get to learn all his tactics, moves and tricks across four volumes and at over six hours of instructions! Trust me when I say, the “Jiu-JItsu Outlaw” instructional si going to turn you into a real competition machine if you let it. It is that good! 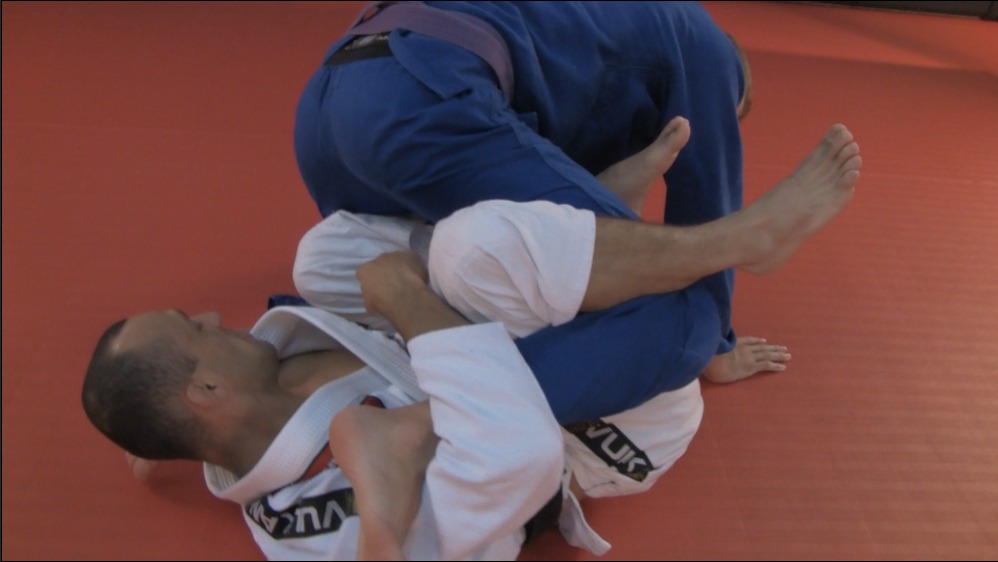 The “Jiu-JItsu Outlaw” Abmar Barbosa DVD is not just another guard instructional. It covers three different open guards that are proven to work at the highest levels of the sport. On top of it, it provides an innovative and efficient passing blueprint that’ll help you pass any guard without difficulty. IN fact, each volume only addresses one specific subject, but they all go very deep. Up first is the closed guar,d with Barboas’s submission heavy game clearly evident throughout, Volume two moves on to the open guard, and in particular, the spider guard. Before Abmar covers the De La Riva, as the last of his open guards, he has an entire volume on guard passing as well, offering a compete gameplan.

Who is this BJJ DVD for? The easy way is to way everyone, as there’s not a soul alive that won’t benefit from it. However, when it comes to competition strategies and systems, you really can’t go wrong with this one. For all the people that are JJ competitors, this DVD is a must. It offers an easy blueprint to improve your guard attacks and guard passes in the fastest time possible. It is a gi instructional, and Barboasas huge comeptito9n experience means he shares certain tips and tricks that will be immensely beneficial for anyone looking to compete.

Ther’s no way you can dream of competing n JIu-JItsu without having a well rounded closed guard game. Regardless of your belt level or experience, you need to have a closed guard game, period! Suffice to say, choosing to follow the blueprint in the “Jiu-JItsu Outlaw” Abmar Barbosa DVD is one of your best options. His take on the closed guar is fairly simple – submit at every opportunity, or use a submission threat to sweep. Easy and effective, if you know exactly what you’re doing.

Barbos starts heavy from the opening chapter, explaining how to do a knee block armbar (or speed armbar) in the opening sequence of the instructional. This is one of the quickest and sneakiest BJJ submissions you can pull off on anyone! Going further, you get a few options of executing an Ezekiel choke from the bottom, which is guaranteed to surprise everyone. In terms of fo further submissions, you get to learn Barboas’s signature arm lock system. It includes a variety of different grips, from lapels to using a figure four.

Also, a huge part of his game and the first volume of this Abmar Barbos DVD are sweeps. Once again, Barbosa sticks to the basics, covering subjects like the flower sweep and the pendulum that are all very high percentage when you set them up correctly, and Abmar has some crazy tips in that department. He has amazing modifications to the flower sweep which actually opens up further arm lock attacks. The pendulum and overhook sweeps work in a similar fashion ensuring either top position or a nasty armlock along the way.

The second volume fo the instructional is where Barbosa’s Jiu-Jitsu Outlaw style really shines through. Here, he shares what he likes to call “the Barbosa guard” It is essentially a lasso and spider guard hybrid with some unique attacking opportunities. It all starts at the beginning though with several chapters focusing on how to move from the spider guard. This ensures you have a flowing and hard to beat attacking game off your back.

The attacks begin with a section on sweeps. First up are the foot-to-biceps sweep and spider lasso sweep. It doesn’t’ take long, however, for submissions to come into the mix. Barbosa introduces armbars and triangles off of these sweeping attacks. A few awesome rolling _foot-on-biceps sweep options follow, offering effective and unexpected ways of getting the top position.

As the volume progresses, so do the attacking concepts of Barbosa’s game. Only offering competition tested moves, he concludes volume three with some crazy double and triple attacks that have won him plenty of titles. A great example is the Barbosa guard into an inverted triangle choke. Another one to keep an eye out for is the hurricane sweep, as well as the sweep fake to submission combo sequence.

This where things really get interesting. Passing the guard in a competition can be a really difficult task, given the level of guards some grapplers have. Barbosa, being the seasoned competitor that he is, seems to ha found a perfect formula. What he likes to do is have a couple of different variations on each of the most efficient guard passes in Jiu-Jitsu. The opening technique is a great example of this. He starts with the double-under pass in pretty “traditional;” style. However, he then offers variations on it, particularly those with arms control that really change the entire movie. Suffice to say if you like to pass under the legs, this one will be a favorite of yours.

Following suit is a really smart piece of passing named the Vidal pass. This is a surefire way of dealing with most open guards, and surprising a bunch of your opponents. And, if that fails to work, things like collar grips to pass the butterfly guard and some crazy X and Z guard passes are certain to get you past anyone’s legs. A move to keep an eye out for in the Abmar Barbosa DVD is the shin trap butterfly guard pass. Learn this one and you won’t have to fear any leg locker ever again.

Wrapping things up si a masterclass on how to set up the De La Riva guard for competition use. Once again, Barbosa’s fascination with the lasso is apparent from the get-go. Sweeps make up for most of the opening portion here. Furthermore, rolling lasso variations, similar to the spider/Barbosa guard feature heavily again. The best part is that in the final part of the Jiu-Jitsu Outlaw instructional, Barbosa doesn’t just cover the De La Riva but also all variations.

The segment on the Reverse De La Riva is a real refreshment, to be honest. It is great to see a simple gamelan that doesn’t involve complex inversion and crazy techniques. Instead, simple roll under sweeps gets you either back position or a top spot. Moreover, lapels feature once again in the dental cloth sweeping system, which is like a simpler and way more effective worm guard.

Finally, a couple of De La Riva and Reverse De La Riva passes. They all mostly lead into the mount, bringing this Abmar Barbosa DVD toa the perfect close.

It is not easy for competitors to figure out which of the thousands of DVD instructionals are really worth their time and money. One key advice is to focus on how good of a competitor the person teaching them is. When it comes to competing in the Gi, under IBJJF rules, the “Jiiu_JItsu Outlaw” Abmar Barbosa DVD is by far the ultimate blueprint to an effective and dangerous game. 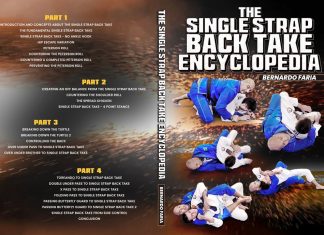 BJJ World - 0
Mr. Bernardo Faria is the face of digital BJJ, no dispute about it. He is also one of the people that have released more...