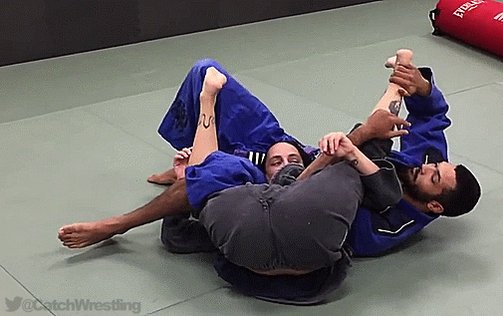 There’s no doubt that wrestling has a lot to offer people that train BJJ. The oldest (arguably) grappling martial art in the world is a real treasury of useful techniques. Throughout the centuries accumulated hundreds of moves, all of which were more than effective at some point. Among them, there are the core moves, the techniques that transcend time and work universally as well today as they did in ancient Greece. And then there are the modern moves that actually transcend the boundaries of sport with their usefulness. One such crazy effective move is the wrestling spladle, a move that can make any grappler feel desperate.

The first time I came across the wrestling spladle, I didn’t think too much of it. It is like a move that wouldn’t really work in BJJ. Plus there was the question of its legality under IBJJF rules. However, after revisiting it later on I got hooked and never looked back. The wrestling spladle is a move that stretches your opponent’s crotch similar to a banana split, while also putting pressure on their neck. In wrestling, it is a pin, but in BJJ it offers much more than just a way to hold your opponent down. Plus it works as the ultimate counter to some of the most annoying moves in the whole of Jiu-Jitsu!

The best wrestling variety for Brazilian Jiu-Jitsu is by far Catch Wrestling. On top of your “basic” wrestling takedowns, pins, and pressure it also offers unique submission threats. One of the most complete grapplers of today, and a Catch Wrestler by trait, Neil Melanson has the ultimate guide on how to integrate it into your BJJ game. Check out the “Catch Wrestling Formula” 4 DVD set and bring a whole new world of pain to your opponents!

As a move, wrestlers use the wrestling spladle mostly to counter the single leg takedown. However, it works more than just a counter as it is a great way to achieve a pin in wrestling, which is a match-winning move. For a wrestling pin, you need to keep the opponent’s shoulders on the ground for a certain amount of time. A great way to achieve this is to lift the opponent’s legs and hips in the air. An even better moment is to put a wedge behind their neck. And the ultimate way to make sure an opponent can’t wiggle out is to make sure their legs are as far apart as possible, on top of everything else.

To try and explain the wrestling spladle as best as I can, we’ll start at the turtle position. Imagine that your opponent is gunning for a single leg from the turtle position. They have a tight grip that’s preventing you from sprawling efficiently. However, that also means that they’re pulling you towards them. The key moment to focus on is trapping the head with your hips. Once you have that, you can focus on establishing grips.

If the opponent has your right leg, you should use the right arm to grab their right leg. When you’re grabbing, the goal is to reach your arm from the inside of their thigh towards the outside. That’s where your other arm should come in, establishing a palm to a palm grip, or an S-grip. From there, all you need to do is sit down to your right side and pull with your arms. This is going to bring the bottom leg in reach, and you’re going to trap that one with both your legs. The wrestling spladle is on.

The one key use of the wrestling spladle is to counter the single leg takedown. We already saw how you can use the spladle against an opponent attempting a single leg from the knees. With a standing single-leg takedown, the mechanics are somewhat different. However, from standing, you end up directly in a deep spladle position that’s more uncomfortable than the previous one.

When an opponent shoots for a single leg, the first thing to focus on is to keep the opponent’s head down. Put your chest over the back of their head to force their head down. From there, think about reaching for a Kimura trap. However, this time you’re going to go for the leg instead of the arm. Use your right arm to grab the right leg of the opponent, inside-out, same as before. As you get a grip on the leg, make sure your trapped leg hooks the near side leg by doing a leg curl.

This is where the most fun part takes place. Once everything is set up, simply roll over your left shoulder, maintaining the position you have over the back of the opponent’s head. This is going to land you in a deep wrestling spladle. From there, you can proceed to hold the opponent down or go for neck cranks, leg locks, or chokes.

From the basic De La Riva guard, as the opponent tries to Berimbolo, you’ll need to make sure you put your hip to the ground. This should be done on the side in which your opponent rolls for the Berimbolo. This is going to stop the Beimbolo at least momentarily. The goal is to use this pause and force your opponent on their back, inserting your bottom leg under their head at the same time. Once there, get the grip on the near side leg and you’re all set for the wrestling spladle. The other leg is already in place thanks to the opponent’s De La Riva hook.

Attacking With The Wrestling Spladle

From a more offensive aspect, you can go for the wrestling spladle off of back attacks. You might even go for it directly from the top turtle position. However, off the back, it works unbelievably well, especially when the opponent goes for a specific defense.

Very often when you have back control, opponents that manage to get on all fours are going to attempt to shrug you off. This is actually a legitimate defense that lands them in top position. Once an opponent starts shrugging you off, simply transition your hooks to the outside, so you can sneak one leg in for a wrestling spladle. Since their legs are straight and apart, you can achieve this quite easily. The trick is not to let go of the seatbelt control as you’re doing it. From there, you just get the grips on the far leg as you roll as you do against a single leg takedown. The rest is up to you.