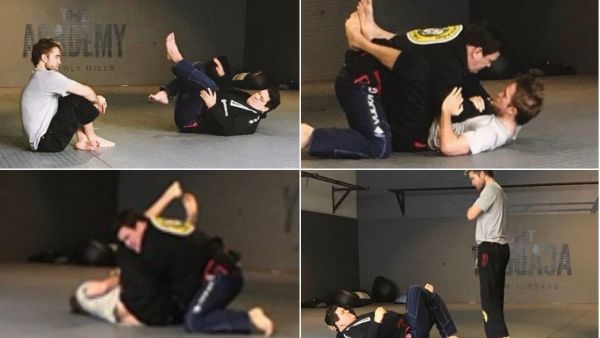 The Dark Knight is not someone that seems to be lacking in martial arts skills, not to mention all the funky gadgets he has. But does Batman know BJUJ along with all the other stuff he is a master of? His latest representative, in the form of Robert Pattinson, certainly thought he needed to improve Batman’s skillset, so he took up BJJ. And he is not a rookie either, having around 3 years of experience under his belt. I guess we’ll see a lot more grappling form the Caped Crusader in the new installments.

It is definitely a trend for celebrities, and in particular, action movie stars to take up Brazilian Jiu-Jitsu training. Often times it is for the requirements of the role, but there are also times when they just enter out of curiosity. In both cases, they become completely immersed in the sport and end up transferring what they learn to the big screen in every role they play. And Robert Pattinson will answer the question” does Batman Know BJJ?” very soon.

If you’re into the DV multiverse, you probably have a feeling that we’re overdue a good Batman. There hasn’t been a good one lately, and when Robert Pattinson got the role, most people weren’t that excited. It may have to do with this prior involvement n Harry Potter and the Twilight trilogy that made him seem inappropriate for the role. However, Ben Affleck didn’t make himself any fans with his performances, so I guess there’s not much Pattinson can do wrong. Particularly now that we know that Batman will have some neat grappling skills.

Pattinson has been training Brazilian Jiu-Jitsu since 2017. Like most of the celebrities in Hollywood, he trains with Rigan Machado, whose academy is a real den for celebrities looking to train. I doubt Pattinson needed grappling skills for Twilight, so he was probably just broadening his horizons. IN any case, images emerged recently via Rigan Machado’s Instagram (later deleted) that show him training with Pattinson, in the Gi and without it.  In the quest to gain some non-werewolf skills, Pattinson seems to have turned to BJJ. To be honest, I really like to see does Batman know BJJ, or will he resort to second-grade fight choreography sequences once again?

With a cast that also includes Zoe Kravitz as Catwoman, Paul Dano as Riddler, and Jeffrey Wright as Commissioner Gordon, I guess we’ll see a different take on the Dark Knight. The movie is scheduled to come out in 2021, and with Pattinson training Jiu-Jitsu, I have to say I suddenly have hope this Batman will be an OK one.

Speaking of Rigan Machado’s academy, the 8th-degree coral belt owns an academy that’s not just for every day and pro grapplers but also has special programs tailored for celebrities. His Hollywood academy is the home to famous stars like Ashton Kutcher, Keanu Reeves, Usher, Scarlet Johansson, and many others join in his special training regiment for movie stars.

Celebrities can’t afford the bumps and bruises we walk around with, so they usually look for privates. In that sense, Machado built an entire system that allows celebrities to train. Machado’s system is for technical training only, where people get the skills, but can’t get hurt. Currently, he has nearly 20 high profile celebrities doing the program. Some train regularly, others when they’re in town.

An interesting thing is that he doesn’t require them to spar, but they won’t get promoted unless they do. So that might spur the question does Batman Know BJJ at white belt level, or better?

Keep An Eye For Jiu-Jitsu On The Big Screen

You can probably find glimpses of Jiu-Jitsu In everything since Orion taught Mel Gibson that now-famous triangle choke for Lethal Weapon. From there on, BJJ has been in movies, more or less. From clear stuff in action flicks like John Wick, to dedicated MMA movies, or simply sequences in fight scenes, BJJ is everywhere. 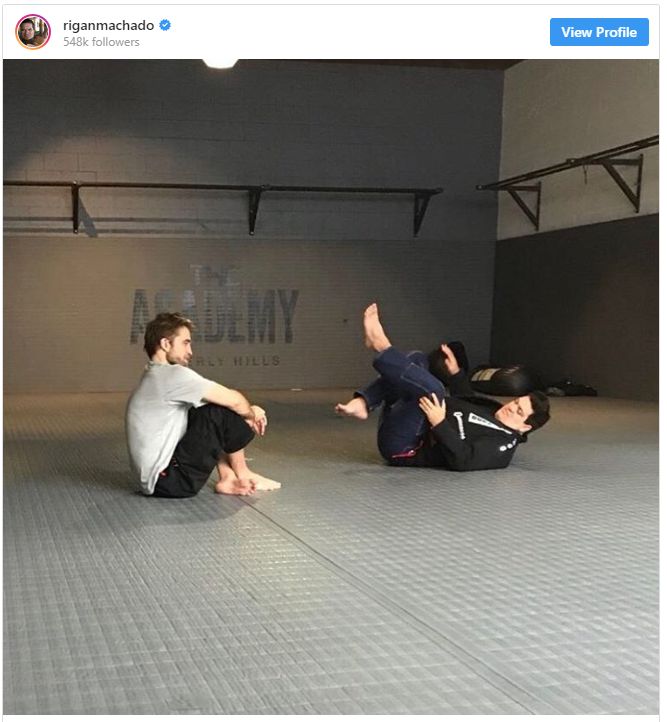 In fact, Hollywood is taking an interest in BJJ itself. There are plenty of series and movies either done or coming out soon that focus on Jiu-Jitsu. The Netflix series “Dead Or Alive” by the “Narcos” director is looking at Mitsuo Maeda and the early years of the Gracies. There’s also the “Lion Killer” movie in which a BJJ instructor that struggles with making it through the day meets a woman that helps him gain a fresh perspective on things.

Theo’s also a movie called “Jiu-Jitsu”, in which Nicolas Cage will fight off alien invaders with BJJ. Not to mention the documentary “Closed Guard” which just came out, as well as Halle Berry’s take on the struggles of an MMA fighter in “Bruised”.

There’s definitely a lot more BJJ coming to the big screen. And it is not just actors that are training, but all other kinds of celebrities, like singers, comedians, celebrity chefs, etc. are knee-deep into it. At the moment, we just need to wait and see if Robert Pattinson can show us whether or not does batman knows BJJ?

Does Batman know BJJ? We’ll find out soon enough, as it seems. Robert Pattinson is a great actor, but the role of the Dark Knight is not for everyone. Whether or not he can pull it off, remains to be seen. However, a few years of Brazilian Jiu-Jitsu training will certainly only help his chances.