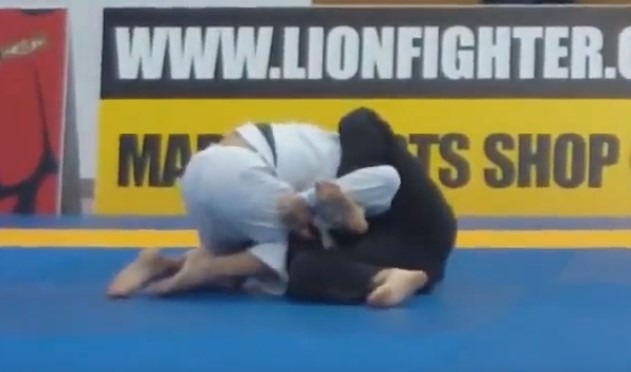 A few years back, when I was on the brink of promotion to blue belt, I had the opportunity to train with Oliver Gedde. Oli is definitely one hell of a black belt and has the power to keep you engaged for hours upon end. In a small-group seminar, the Roger Gracie black belt demonstrated pure half guard magic for us uninitiated beginners in the sport. From that moment on I became a vivid follower of the entertaining BJJ master.

Roger introduced me to some half guard concepts that I still use to this very day. What he did not show us, on that occasion was a very, very cool submission that he invented. Nope, he kept that one to himself and we had to learn the Squirrel lock from online videos, just like the rest of the world.

In short, the Squirrel lock is a Kimura variation. So, what’s so cool about this move? After all, there are a bunch of kimura variations from all kinds of top-level grapplers out there. Well, for starters it’s done from a position where most people only think about surviving. Furthermore, it is done with the help of your legs, instead of your arms. Yes, you read that right. A kimura from the bottom without using your arms. To be completely honest, I probably would’ve been skeptical of it too, if I hadn’t trained with Geddes previously. Knowing what I know about him I decided to give the Squirrel lock a try. Fast forward a few years in Jiu-Jitsu and it’s now a very formidable weapon that I tend to unleash given the opportunity.

A Bit Of Background On Oliver Geddes

As previously mentioned, Oliver Geddes is a Roger Gracie black belt. He comes from London, England, where he spent a long time of his BJJ career training directly with Roger. In fact, he spent so much time there that he eventually started teaching at Roger’s academy in London.

The 33-year old Scramble-sponsored grappler started training Brazilian Jiu-Jitsu in 2005. He enjoyed the Gentle art so much that he quit his job and dedicated full time to BJJ. For a while there he not only thaught at Roger’s London academy but also lived there.  He got a black belt from Roger in 2011, which is a lightning speed black belt promotion in BJJ terms.

Apart from being a great teacher and truly dedicated to the BJJ lifestyle, Geddes is also a very fierce competitor. He has hundreds of competition under his belt, medaling and winning a great number of them. Not only that, but he is a regular at most major IBJJF events as a referee as well as a competitor. In fact, he is the quintessential BJJ globetrotter, scouring the globe while disseminating the principles of the Gentle Art. Geddes is a huge fan of working from the half guard, which he has mastered to perfection. He also has a very strong submission game, that involves both upper and lower body attacks. Seeing how he enjoys battling from bottom positions and is always looking for the sub, you can see why the Squirrel lock deserves merit.

The Squirrel Lock – A Kimura With No Arms

So, finally, we have arrived at the submission itself. The Squirrel lock is probably one of the coolest submission you’ll ever attempt. It may frustrate you in the beginning or may even seem impossible to pull off in competition. Well, Oli Geddes has done it and here’s the video proof to corroborate his claims:

As you can see the Squirrel lock is set up from bottom side control. In fact, the harder your opponent attempts to keep you on your back, the worse it is going to be for them. The Squirrel lock begins with a good grip on the opponent’s sleeve. The idea is that you need to have the arm that’s near your opponent threaded all the way through towards your hips. You then use this arm to get a deep sleeve grip on the opponent’s far sidearm. Once the grip is established it is time to get your legs into proper position.

First, you’ll need to get your near side leg deep inside the crook of the opponent’s elbow. That way, in combination with the dep sleeve grip, you get a spider guard-like control. In order to be able to get into finishing position, you’ll need to use your leg to cause and maintain a bend in their elbow. Next, your opposite side leg goes over the trapped arm’s upper arm and hooks the forearm. From there, use your foot like your hooking in butterfly guard to secure the arm. In order to keep things even tighter, you can use your free arm to catch the opponent’s trapped arm over their back and secure it there.

All it takes is hip escaping toward your opponent in order to place massive pressure on their shoulder. In most instances, you’ll get the tap right then and there.

While most people usually tend to look for ways out of bottom positions like side control, sometimes going on the offensive is your best bet. The Squirrel lock is far from the only option from here. A baseball choke, some Americana variations, and even leg lock attempt area available if you have the right mindset. Oliver Geddes is a great example of how a world-class black belt with a well-defined game thinks about BJJ. Instead of just thinking about escaping and then looking for attacks, he starts with the attacks and in the worst case scenario, is going to get at least an escape.

Looking for the finish from the bottom is definitely an unexpected way to behave. In side-control, general behavior dictates that you take being on the defensive once you’re on the bottom. Even the opponent on top doesn’t really expect a direct attack from there. Often times you’ll have the Squirrel lock fully locked in and they won’t even try to prevent it because they haven o idea what’s going on. The lock is such a good move that when you get the hang of, you’ll be able to get even when it is apparent what you’re doing. That said, there’s a backup option that we didn’t cover above.

Every once in a while you’re going to go against a freakishly flexible opponent. The beauty of the Squirrel lock is that you can use it to flip your opponent over and not only gain side control for yourself, but also finish the lock from a dominant BJJ position. This submission is as good as it gets it only need you to give it the benefit of the doubt once. After that, it’ll serve you well for years to come!

A Few Crazy BJJ Armbars To Brighten Your Day