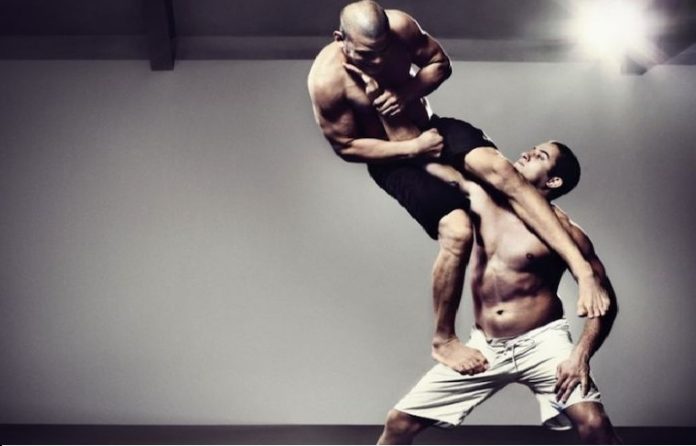 BJJ Armbars, who doesn’t love them? They’re one of the most utilized BJJ moves among both beginner and elite level grapplers. Armbars are effective, easy to understand and readily available. As such, they’re the perfect combat sport submission. They transcend the boundaries of sports, as they’re applicable at the highest level of any martial arts competition. As such, we see them on a regular basis in MMA, Judo, BJJ, Sambo and many other martial arts. However, getting the armbar is where the real art is. OF course, you can pressure an opponent from S-mount for ages, or packed them up tightly form the closed guard. or, you could go for the attractive and flashy, but just as effective. This is exactly what we’ll focus on today.

The armbar is one of the oldest submissions known to man. There’s no known original date, nor a person that can be credited to discovering this move. In one form or another, it is a part of many ancient sports, whether it is wrestling or Jiu-Jitsu. The Juji Gatame is effective, tight, open up further transitions and can be set up from virtually anywhere. Defenses are plentiful, but not all of them are effective. That is exactly why high-level grapplers defend the armbar before an opponent can settle in. This makes entries the crucial part of ensuring you get a tap via BJJ armbars. Let’s explore some outside-of-the-box options today.

The armbar is one of the most beautiful submissions you can get. It is an embodiment of the utmost principles of Brazilian Jiu-Jitsu. First up, you are using your whole body to isolate a single body part of your opponent. this means that it is leverage and mechanics that matter, rather than strength. Furthermore, BJJ armbars are highly technical moves, particularly the way you enter into the final position.

The armbar works quite easily – it hyperextends the elbow joint. Basically, it forces the elbow to bend in a direction opposite of its natural bending direction. Of course, significant damage accompanies this unnatural movement. Once you consider that it is your entire body forcing pressure on the arm, which is a weak limb at best, you can see why som any fighters prefer it.

However, BJJ armbars all suffer from the same issue that always accompanies high-percentage moves – elaborate counters. The more certain moves work, the more people find ways to deal with them. And, as prevention is better than the cure, people look to block entries to an armbar whenever possible. Getting innovative in that department often makes all the difference in terms of succeeding with the Juji Gatame.

Looking for more armbar option? “50 Shades Of Armbar” is a Renato Canuto DVD that is the answer to all your questions. It literally contains nothing but armbars upon armbars. Moreover, it is one of the world’s best armbar specialists that does the demonstrating. Get it!

BJJ armbars are always going to feature in any MMA or grappling competition you see. At the very least, there is at least one armbar finish in each of them, often more. However, it is those armbar setups that are outside of the “expected” ones that catch the eye. In fact, they not only catch the eye but more often than not, catch the opponent as well. I personally have a few up my sleeve, so, with some more research and consults, I came up with the following list of high percentage unexpected BJJ armbars:

This crazy version works from both turtle and side control. The first step is to make the opponent face away from you and be on their shoulder. How you get there is down to you and your preferences. The most important part of this armbar is trapping the arm.

Namely, when you’re behind the opponent you want to use your own bottom arm to trap the bottom arm of the opponent underneath them. Aim for an elbow grip with it and reinforce it with the other arm by sneaking it between the legs and grabbing the wrist. Now, get both your feet as near to your opponent as possible and just do a deadlift. As the opponent inevitably spins, let go of the wrist and you’ll end up with a deep armbar grip and a very confused opponent. One of the best BJJ armbars that I’ve ever done.

Do you know how you get up with your arm over the same side shoulder that you’re going to sweep to with the hip bump sweep? Well, it is time for a double surprise. Not only will you not sweep, but you’ll also set up one of the nastiest BJJ armbars ever!

As you get up for the hip bump sweep, throw your arm over the near side shoulder instead. Essentially, you’re looking for a collar tie here. As you do, trap the arm on the same side by throwing your leg as high up the opponent’s back as possible. Ideally, it is going to be parallel to their shoulders line. Here’s the tricky part. At this point, you’ll need both your arms on the floor behind you. The goal is to swing your opposite side leg over and behind the opponent’s head. This is the initial acceleration that’ll allow you to turn to the side and grab the arm as you spin around your own axis. The end result is a Gordon Ryan like armbar position that’s impossible to get out of.

There’s no way I can do a crazy BJJ armbars article and not include a flying armbar setup. Still, while we’re on the subject of outside-the-box setups, let’s tweak this one as well. There’s hardly anything more attractive than flying submissions, and flying armbars are most definitely on top of that list.

To make sure that you do not land on your back, you need to know how to anchor yourself to your opponent before you go flying. Doing this in the GI certainly increases your chances of success, due to the better anchor points. The grips you have here must include a tight triceps sleeve grip and a collar grip. You need to use both to actually climb up your opponent before you go flying. So pull yourself in and as you jump upwards, aim to place a foot on their hip. This will help propel you further so you can swing a leg over the head even on a fully upright opponent. Now you can let gravity do the trick and tighten everything up as the opponent is being pulled to the ground.

One of my all-time favorites when it comes to BJJ armbars. Gi or No-Gi, this one works like a charm. the condition? Double wrist or sleeve grips. Without them, do not even think about attempting a helicopter armbar.

From any guard variation, once you have double wrist/sleeve grips and both your feet on the hips, you can work. Use the grips to pull the opponent as high overhead as possible, and bend your knees towards your shoulders. The goal is to get the opponent’s hips over yours while lifting their feet off the ground. This is the point where you have to decide the direction. You need to cross one arm across the opponent’s body. This opens up an attack on the other arm. Simply kick the hip on the side of the crossed arm upwards and extract your foot from underneath the opposite hip. This will cause your opponent to twist and lend directly in a tight armbar.

You can hit this one either from a half guard pull, or any half guard variation. All you need is to make sure you have an underhook, or a way out the back door. Essentially, any back attack from the bottom half guard is going to open up BJJ armbars for you if you know they’re there.

Once you’re behind your opponent, You don’t settle for hooks, but rather throw your leg all the way around, so that it comes over the opponent’s head. From here, you have two options. With the Gi, you should be holding the same side lapel grip from the very first moment you start the move. In No Gi, this is the moment you get a deep armbar grip. Now, just sit back and enjoy your armbar.

Let’s end with the armbar that has the coolest name of the bunch. Don’t let it deter you, though as it is crazy effective. It is not an entry per se, but arguably the best, and completely unexpected way fo braking through even the most powerful opponent’s grips.

You need to start in the regular top armbar attacking position, you know, the one you get to from mount. The most common problem here is an opponent holding onto their grip for dear life. Wit ha strong opponent, breaking the grip can be a real hassle. So what you do is grab a spiderweb and tilt toward the opponent’s legs. As you fall, you can expect their upper body to follow. The moment your shoulder touches the ground, the leg you have over the opponents head should open to the outside. Much like a dog’s leg when peeing, hence the name. To make sure you break the grip you need to shake your leg back and forth to place pressure on the head. This puts a strain on the grip and it inevitably breaks, regardless of how strong an opponent might be.

It doesn’t matter if you like BJJ armbars or not. You’ll do them regardless as they pop up even when you’re not setting them up. So, why not have a few crazy aces up your sleeve for when such an occasion arises? All of the above options work, albeit some better for certain people than others. Find the ones that fit your game and start going for the attractive!