Competing in anything is stressful. That said, there are levels to competition anxiety. A lot of that has to do with the competition setting. In general, team sports are usually less stressful than individual ones. Moreover, competing in martial arts is always harder than competing in other sports, at least mentally. After all, you are fighting with another human being, even though it is in a controlled setting. Furthermore, grappling competition is way different than other martial arts. Grappling is one of the oldest modalities of competition among people that do not intend to injure one another. And it is anything but pleasurable, at least until you get the hang of it.

The thing about anxiety is that we can find ways to battle it because we can understand it. While everyone has a different response to stress,  the physiology of stress response is the same. It is normal to be jittery when you’re going up against another grappler, with a referee standing in the middle. After all, it is all about who has the better performance. Moreover, grappling competition is never without an audience, adding to the anxiety and stress of competitors. Still, as you’ll find out after your first one, the worst thing that can happen is that you can lose. And its nothing to be stressed about.

Competition anxiety is something that literally every athlete feels. There isn’t a human being that has not felt anxious when under the spotlight. Whether it is competing, performing in front of an audience or any setting that is different from what we’re used to, anxiety will inevitably follow. The one biggest mistake is trying to go against it and look to remove it. The most important thing you need to know about anxiety is that it ‘ll never go away. That said, you can control it and even use it to your advantage.

Once again, anxiety and stress do affect everyone differently. However, the following tips cover pretty much everything, so that anyone can find a way to deal with anxiety. Remember that the point of grappling competition events is first and foremost to have fun. testing yourself and your tactics come second, and winning is at the very end.

When we compete with someone, the ultimate goal everyone wants is to be better than the other person. In simple terms, we all want to win. This is precisely why we get anxiety. the more we crave the win, the worse our performance anxiety is going to be. This first tip is also the most important of all: you have to accept that you won’t be able to win every match. 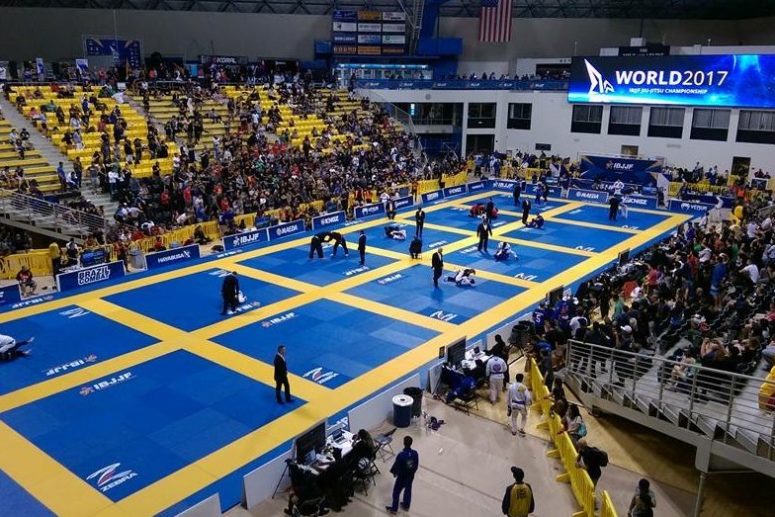 Regardless of how much you want it, or prepared for it, you’ll never be able to go without losing a match. Believe it or not, that is the point of competing. It is not important whether you lose because you make a mistake, or because the opponent is better. In a grappling competition, anything can happen. The point is that you go in looking for the win, but not expecting to get one in every match. the point is to work and compete for it, not go in there looking to claim it.

Of course, our minds play the most important role when it comes to having the competition jitters. Believe it or not, you can also train your mind, much like you do with your body. The main thing to remember is that you have to keep a positive mind, as obvious as that might seem. Now, you are going in to fight, so you shouldn’t think about unicorns and pink butterflies.

However, there’s absolutely no point to let negative thoughts enter your mind. This means not thinking about possibilities of losing, getting injured or making a mistake. This means you’re placing yourself under pressure and actually increasing your anxiety. Stay loose and keep a positive mindset.

If there’s one thing that could help you with grappling competition anxiety is competing. Yeah, the more you compete, the easier it is going to become. Think about this example for a while. Do you remember your first live rolling efforts? The moment you start rolling, you’ll get absolutely crushed. However, the more you do it, the easier it gets. Not only that but you become better at it.

Well, it is the same when you compete. The more BJJ tournaments you go to, the more experience you get. That means that you’ll inevitably become better, but also more comfortable competing. As that happens, anxiety is going to go down.

Speaking about strategy, fear of the unknown is always going to result in anxiety. The more you wonder about what your opponent is going to do, and what you’ll do in response, the more you’ll build up anxiety. Instead of trying to figure out what is going to happen, make sure you know what you’re going to do, at the very least.

When you prepare for a competition, make sure you devise a solid game plan. More importantly, if you want to be calm and perform well, stick to the plan. Do not go off books the moment you slap and bump. Focus on executing your gameplan and making the opponent fight your game. This will have you in control the entire time. On the plus side, working your gameplan step by step does not leave much time to think about anxiety.

A good transitioning game is going to take care of pretty much any competition scenario. it’s a great way to both play your game and prepare for the unknown. Bernardo Faria is a master of transitions that is ready to teach you how to become one too. Pick up his “Transition mastery” DVD set for a taste of something different! 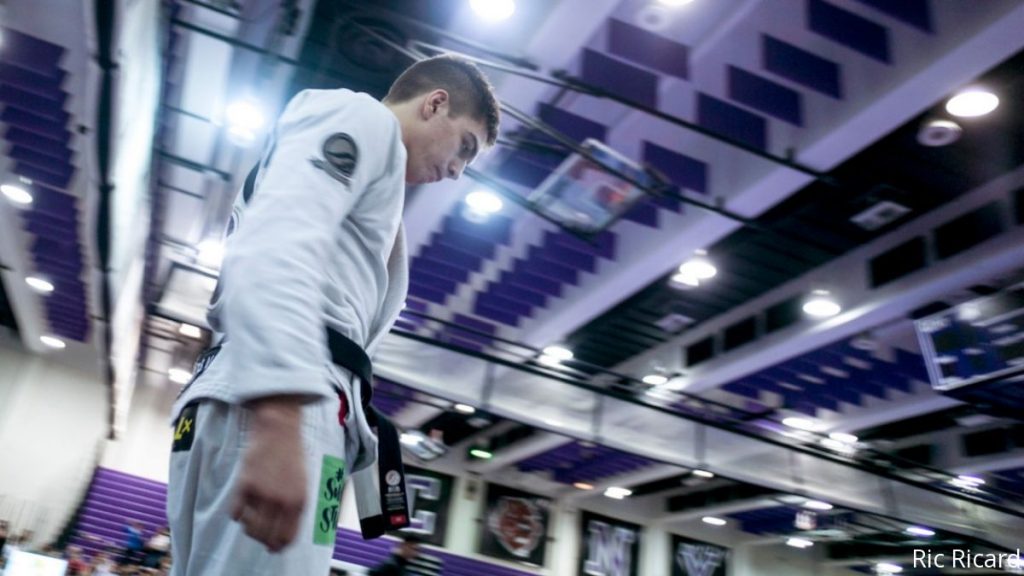 By unnecessary stress, I mean everything that doesn’t have to do with a grappling competition. The first thing here is to make sure you get a good night’s sleep. UNless you give your mind a rest, your body won’t be able to perform. Next up, make sure you’ve got everything dialed in. Focus on finishing your weight cut on time and without too much hassle. Make travel arrangements so that you have time to get ample rest before stepping on the mats. All in all, try to limit sources of stress as much as possible so that you can focus on Jiu-Jitsu completely.

This one ties in with our previous tip. Eating is the trickiest of the bunch because it depends on your weight. If you have weight to cut, you’ll probably be limiting food. What you must not do completely stop feeding. So have a good nutritional plan and try to have breakfast before fighting.

Also remember to stay hydrated, once again, as much as cutting weight allows. IF you’re cutting to the very last moment, at least make sure you get some electrolytes right after weighing in and in between matches. Do not underestimate the power of the positive feeling of a full stomach.

Finally, make sure you breathe. You don’t have to do any Wim Hoff craziness or meditate, just breathe normally before your match. If you can also control your breathing while you grapple, you’ll have absolutely no problem. However, it is enough to breathe calmly before a match and your anxiety will fade away.

I cannot stress this one enough. the moment your match starts, anxiety will reach its peak. The more the match lists, the less anxiety you’ll have. However, the initial moments are key. A great tactic is to always constantly listen to your corner, particularly if you feel your mind going blank for a minute. The best way to get through that initial anxiety is by allowing others to guide you.

On the subject of listening, your favorite music choices will go a long way to calming your nerves. Contrary to popular belief, it doesn’t have to be heavy metal or something of the sorts. You can get int grappling competition mood even with reggae if that is what motivates and relaxes you.

While this is probably the most obvious one, make sure you know all the rules of a tournament before you compete. Understanding the tournament format, ruleset and referees actions goes a long way to removing a lot of unknowns. That, in turn, as we already know, reduces anxiety. Make sure you step into an environment you understand and you’ll do great!

Warming up is another key aspect of positive grappling competition experience. It is also something you’ll have to figure out on your own. Some people do well with just a little mobility work. Others like to run or do jumping jacks. There are also those that can’t compete unless they do a few all-out rolls. Figure out what is best for you and what gets you going. Then, simply do it before you have to step on the mats. Confidence and comfort are great ways of battling nerves. 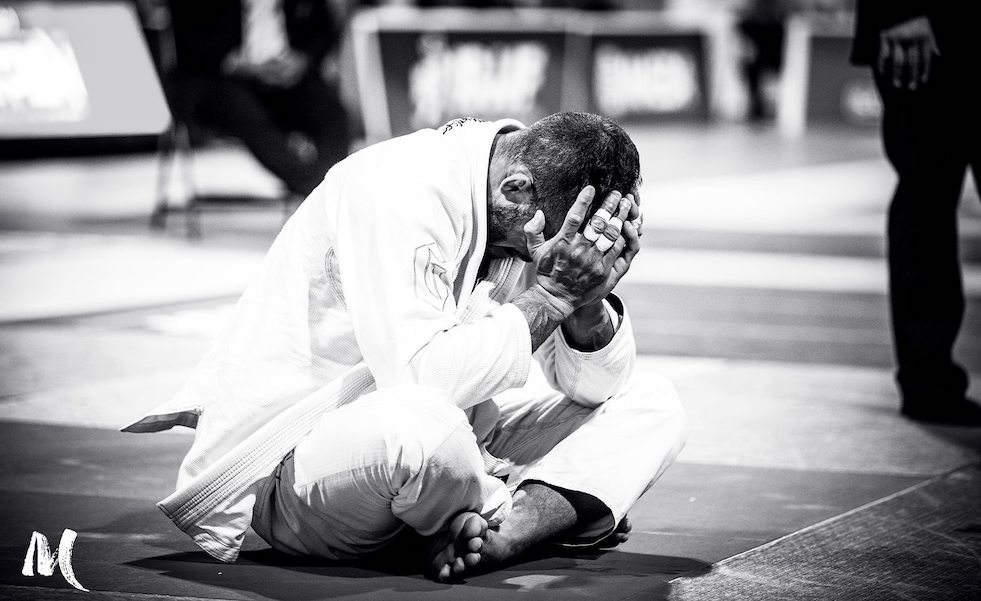 As a final tip, make sure you really give winning and losing a thought. Normally, winning is the best possible outcome of any competitive effort. However, is losing really such a big deal? The world won’t end when you lose. You might feel sad or disappointed but that should be a motivation to do better. All in all, losing has a fun side to it. Once you figure it out for yourself, you won’t demonize it anymore. It is not that you won’t want to win, you’ll just be more relaxed and laid back about possibly losing.

Anxiety can really throw a wrench into the performance in a grappling competition. There area athletes that are real beasts in the gym but choke up in tournaments. Once these people get over their anxiety, the game is on! There are, however, cases of people that never really manage to deal with competition jitters. Make sure you’re not one of them and follow our tips for battling grappling competition anxiety!