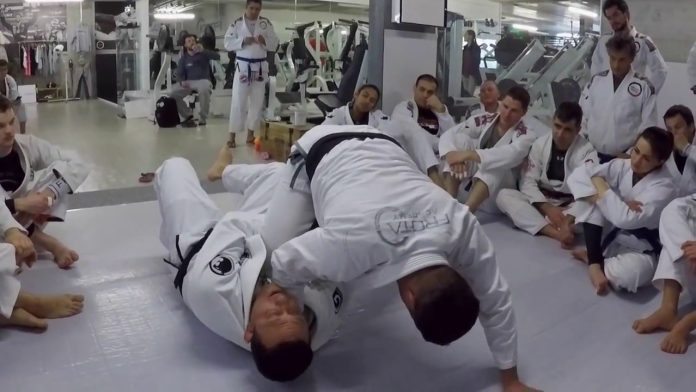 Out of all the torturous positions in Brazilian Jiu-Jitsu, none is more painful than knee on belly. Of course, this holds true for those occasions in which you’re on the receiving end of it. Getting the air crushed out of your body, along with the weight of an opponent on top of you is enough to break even the strongest fighter. The knee on belly position is the true showcase of BJJ power. A position from which even a 150 lbs grappler can be as heavy as a 300 lbs one while controlling a much bigger opponent. In cases when it’s the other way around, well, good luck to the smaller bottom person. Or for those that do not want luck but are after the technique, 4 high percentage knee on belly escapes to get you breathing and grappling again.

Knee on the belly. The one position every grappler fears. It doesn’t matter how big, strong or skilled someone is. if you’re up against an opponent that knows how to control the knee on belly position, you’re done. Although the position is not one for static control it is one of pressure. People that know how to stay in control also understand that the need t o switch sides constantly. However, they also know how to switch by maintaining pressure, taking all will to fight out of you. But there is a way out. Actually, there is more than one way out, making you as unpredictable from the bottom as the attacking is. Knee on belly escapes are probably the most technical moves you’ll ever learn in Jiu-Jitsu.

Before we even think about discussing knee on belly escapes, let’s analyze the position for a while. The knee on belly position is considered a halfway stop between side control and mount. As such it brings two points in the competition, depending on the ruleset. It also opens up plenty of attacking opportunities, in the form of chokes, arm and leg locks. Getting to the mount, or even back control is also pretty easy. And to top it all, there’s immense pressure with absolutely minimal effort during all of this.

For the knee on belly, you essentially need to have the tip of your knee placed right below the sternum of your opponent. This is how you exert maximal pressure on the diaphragm, apart from the direct pressure on the stomach. Your foot should hook the opponent’s hips, making it difficult to access. The other leg is responsible for balance and support. It needs to be out wide at an angle, foot on the ground. It should not be accessible to the arm of your opponent.

The pressure from the knee on belly comes mainly from the grips and hips. If you just stand in the position you won’t really have that crushing effect. However, if you grab the near side lapel as deep as possible and you pull you get a different effect. If you also pull the pants at the hip level you multiple your pressure. To really torture someone, you’ll need to put your hips into it as well. Just a slight thrust forward is going to make all the difference.

Staying Safe In Knee On Belly

We’re still somewhat away from talking about specific knee on belly escapes. First, we need to see where the danger is and how to stay safe. While bearing the pressure might be quite difficult, the ultimate goal of the position is to get the mount, back or a submission. The pressure is simply a gateway for your opponent to get what they want. However, you are the one that needs to open the door.

First and foremost, never push on the knee with your opposite side arm. This is a clear invitation for a far side armbar. Second, do not use your nearside arm to push on the opponent’s torso. Once again, armbar. Make sure you have both your arms T-rexed on your chest. This will keep them safe along with your neck. Most chokes from knee on belly rely on the Gi, so keeping your arms close is going to make your collars and lapels inaccessible. Also, keep your feet on the ground, knees bent. Every time you throw your legs toward the opponent, you open up leg locks entries or transitions.

4 Knee On Belly Escapes That Work

Finally, we can talk about knee on belly escapes. the moves we’re going to cover today are based on the main weaknesses of the position. The first one exploits the knee’s tendency to push downwards. The second one is all about disrupting the already fragile balance of the position. The third and fourth escapes are going to feed the opponent’s tendency to hold you in place using their grips and pressure.

#1 The Most Basic Knee On Belly Escape

If you’re going to escape from any position in BJJ, your best bet is a simple and easy escape. As long as you’re safe, there’s no need to think about fancy 10-step escapes. For this one, all you need to do is hip escape away from the opponent. yes, this is impossible to do directly because of the pressure. however, ask yourself what the focal point of the pressure is? The answer is the knee. So to escape knee on belly, you need to redirect the focal point of the pressure. After that, gravity will take care of the rest.

This escape is simple – you just need to slide your near side elbow in front of the knee. You might need to twist to get your elbow in position. From there. simply hip escape and their knee are going to land on the ground and you can technical stand up or go into half guard. The trouble with this escape is that it won’t work if the opponent has their grips tightly in. So, whenever you feel someone going into knee on belly, this should be your first choice of escape.

As far as knee on belly escapes go, this is the one that you’ll probably use most often. it works well for both Gi and No-Gi and is fairly easy to execute. Furthermore, it doesn’t require you to open up anything for your opponent and exploits their attempts to stay in static control.

To execute this escape you must first grab the opponent’s belt with your nearside arm. keep the elbow close to you and you’ll be safe. next, you’re going to use your near side knee to kick the opponent in their butt, making them post above your head. Now they’re out of balance and all the pressure is gone. From this position, you need to use your free arm to hug their leg right below the knee. Simply extend your legs and turn to your belly and you’ll end up on top, ready for a leg drag pass.

This is probably the coolest escape from the bunch. it is my favorite and it works against everyone. For this escape, you’ll take advantage of the fact that your opponent has tight grips on your collar and hip. First, you’ll need to make sure you break their posture down. To do this, reach for their far side collar with your far side arm. Once you have the grip, push towards your legs and then pull downwards. At this angle, there’s no way for your opponent to resist.

Next, you’ll use your near side arm and your head to trap the arm that’s gripping your collar. Look to use your elbow crease to trap their arm just above their elbow just like for a straight armlock. Once you have the arm trapped, the escape is simple. Just turn to your side and push on their trapped elbow. You’ll not just end up on top, but in a great position for an armbar too.

#4 The Roll Over Escape

This one is courtesy of Kurt Osiander. Of all the knee on belly escapes, this one has the most steps. This doesn’t make it complicated, though and it is perfect for really experienced opponents. This is the escape to turn to when nothing else seems to be working.

The first thing to do is sneak your nearside arm under the shin of the knee on belly leg. Once through, the goal is to grip the back of the Gi skirt or the belt. The opponent’s reaction here is going to be to trap your arm with the leg. For that, they’ll have to transition to a cross-face in order to maintain balance. This is exactly where your escape takes place. Once your opponent lowers down, use your free arm to grab over their shoulder and in their armpit. This provides the leverage to tilt your opponent over. Simply bridge up and turn to your knees, just like when escaping the mount with an Upa.

Kurt Osiander is full of effective escapes, counters and brutal old-school attacks. he lays it all out in his “Fundamentals Of A Jiu-Jitsu Renegade” DVD set. There’s no excuse for not having a Kurt Osiander DVD instructional so go get yours! 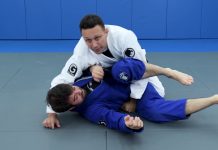 BJJ Guard Pass Basics: Getting Through The Layers Of Any Guard