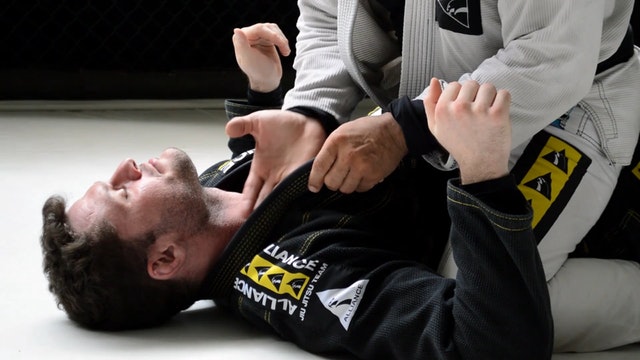 Whenever kids get into it on a playground, there’s one position that comes instinctively to them. As with grown-up fights, most fights end up on the ground. When they do, one person inevitably ends up on top. The position everyone strives for, from the playground sandbox to the octagon is the mount. It has a huge mechanical advantage over an opponent and plays right into human instincts. A such, Brazilian Jiu-Jitsu has perfected the position to ti’s tiniest detail. The mount is often dubbed the “king” of BJJ positions. Although some might argue, there’s no denying that the mount is one of the positions to be in. But staying in the mount is not enough. If you can’t or won’t punch, then you need to know a few submissions from the mount that’ll finish everyone.

Despite the overwhelming mechanical advantage of the position, submissions from the mount are no easy feat. Against an inexperienced opponent, you can do whatever you want, and make it look easy. However, if the person on the bottom knows what to do you’re going to have to work. If you can make submissions form mount look easy against a seasoned grappler than you’re really high level yourself. For most, it takes a long time and lots of mistakes before they get the mounted game down. Instead of trying to figure it out for yourself, we’re going to provide a simple guide to the best submission options from the king of BJJ positions.

The main advantage of the mount position is that you have a high degree of control over an opponent. No matter what they do, you can adjust easily and look to apply your game. When you understand the mount positions, you’ll be able to see and use every opportunity that comes your way. If an opponent is actively trying to escape there will be plenty of openings. If they’re just sitting tight defensively, you can open some doors by yourself. All you need to do is know which weapon to use and when.

Dominant Positioning In The Mount

The mount position is fairly simple at first glance. However, staying on top is like riding a rodeo – you’re going to get flipped at one point or another. In order to avoid, you need to know how to control the position. To do that you must realize two things. First, you need to know the control points of the body from the mount. Second, you need to know which height you need to be at for control and submissions from mount

The main control point of the mount position is the hips. Whenever you’re on top, your hips should, at least initially, be right on top of the opponent’s hips. Sitting with your body weight right above the opponent’s hips make s you notoriously hard to move. The secondary point of control is the shoulders. This is done with the help of your arms, torso, and head. A simple hand under the head offers you the option to control an opponent’s posture along with their shoulder girdle. This effectively pins an opponent down completely.

In terms of mount height, there are two variations. The first is a low mount, which is what I described above. The second is high mount which brings your knees as far up the opponent’s armpits as possible. For hip control, you’re going to use both feet on either side of the shoulder control. The high mount frees up your arms to hunt for submissions but takes away from the hip control.

When we’re talking about submissions from the mount, the most important thing is timing. You have to be as precise as possible with your attacks. Whenever you’re looking for a submission from the mount, you’ll have to sacrifice some of your structure in order to obtain it. This means the opponent can use it to get out. that’s why you need perfect timing before anything else.

next, it is very important to have more than on weapon It’s ok if your favorite mount attack is an armbar. But you also need at least one choke, one bent arm submission, and a leg lock to complete your arsenal. You never know which is actually going to work.

Finally, remember that constantly threatening your opponent means they have to defend. This, in turn, provides you with control over them and the opportunity to create an opening. be mindful though, that only hunting, for one thing, is not going to provide you with success. Be ready to use the opening you get, and do not hesitate to go for it!

The Reason why there are two submissions from the mount in each category is twofold. First, they offer both Gi and No-Gi options to finish. Next, the compliment each other perfectly, working as chains. The only way to be proficient from the mount is knowing how to attack from both low and high mount with a barrage of various attacks that you can connect.

The cross collar choke is probably the most quintessential of all the submissions from the mount. Roger Gracie does it like no other, submitting the highest level black belts like it’s a joke. This only demonstrates how much the move is effective. For the cross collar, you need one hand in each of the opponent/s collars. As the name suggests, one hand should go deep on the opposite side collar. The other should follow. The grip you need is four fingers in, thumbs out. To submit all you need is to keep your elbows close and place your forehead on the mats, above the opponent’s head.

For a No-Gi option (also available with the Gi) you can always go back to a truly old school choke. the Helio Gracie choke requires you to simply place a fist on each carotid artery from the low mount. just squeeze and sprawl from there and you’ll get a fast and easy choke that works.

There’s no way we can skip over these two when the topic is submissions from the mount. The Americana and straight armbar are not only classic mount submissions but the arm-locking combo from hell. You have both a bent and a straight arm lock, they work with and without the Gi and they compliment each other. Plus, you can use them to transition to and from low/high mount.

Starting from low mount the Americana is the first one. All you need is to pin one wrist of the opponent to the mat right next to their head. the arm should be at a 90-degree angle. You need to control the wrist with your opposite side arm and thread the other arm under the opponent’s upper arm. The result is a figure four grip which is essential to finishing. Simply pull the opponent’s back of the palm across the mat, like a paintbrush and you’ll get a tap.

The defense to an Americana is for your opponent to find a way to get their arm to their chest. Once they have it, you’re all set for a straight armbar. The figure four rip you already have means you’re in complete control. All you need to do is the transition to an S-mount and hit the straight armbar. The grip is going to help you finish against any resistance as well.

The mounted triangle and the Gogoplata are not submissions from the mount that you see often. they do work, however, and they have their place in the hierarchy of mount attacks. For the triangle, your best bet is the high mount. Sometimes the opponent’s try to sneak an arm under your leg when in the high mount. This sets you up perfectly for a triangle. Simply control the other arm, and put your free leg under their head. That’s it locking the triangle is easy from there. To finish, just pull up on their head. or, if you’re after fancy points, switch to a Gogoplata.

From a mounted triangle, getting the Gogoplata requires you to switch legs. Basically, you’ll want to open the triangle, get your leg back on their shoulder and use the other leg to choke them. To do this, you’ll need the dexterity to place the foot on their trachea. Once you have it, the choke is really tight and brutal. Just like with triangle, even if an opponent reverses you at this point you’ll still get the submission.

Finally, sometimes, in order to get submissions from the mount, you need to leave the mount. How come it’s still a submission from mount? Well, the setup is from the mount, even though the finish might be a step further. Like an Ashi Garami, for example.

When other submissions from the mount don’t work, you need to get innovative. use both your feet to put in butterfly hooks from the mount. This is going to open an entry to an Ashi Garami on each side. You simply need to sit back and trap one leg. From there on feel free to finish with a leg lock of your choosing.

Become a real menace from all top positions by adopting some of the principles of Catch Wrestling. There’s no better coach to teach you Catch Wrestling for BJJ than Neil Melanson. Check out his “Catch Wrestling Formula” DVD for detailed information.

17 positional Escapes from Mount and Back Mount