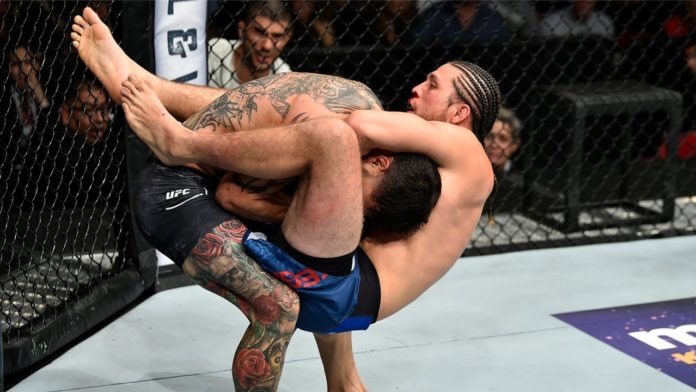 Sometimes, if you try really, really hard, some of those moves you see in movies might just end up working for you in Brazilian JIu-Jitsu as well. If you’re expecting a flying leg scissor head grab to an inverted Gogoplata, you’re not getting it. What I’d like to dissect today is the standing guillotine choke. Not quite as attractive, yes, but extremely useful once you get the hang of it. After all, why wouldn’t you want to finish the job as early as possible in a match? And, even if the match has to end up on the ground, it’ll be on your terms, most often via a takedown.

A standing guillotine choke is not something you see in Brazilian Jiu-Jitsu really often. IN fact, in most grappling martial arts, including MMA, there are only a few instances of this move in a match or fight. And still, the one that has potential, has solid biomechanics and is not really that hard to pull off. I started considering it since people really do not take care of their necks too much when standing. That, combined with solid front headlock entries, means you can wrap up a match before it even starts. And yes, it does work on opponents of all levels. Moreover, you’re not just limited to one standing guillotine choke variation.

Why the Guillotine Choke Is So Powerful

The Guillotine choke is one of the best chokes you can do in Jiu-Jitsu. Why? Well first, you can do it from both top and bottom positions, including, but not limited to, guard, half guard, butterfly guard, mount, etc. Secondly, they work just as fine in Gi and No-Gi. Moreover, anyone can learn to execute them with pinpoint precision regardless of belt color or experience. And there’s also the fact that there are plenty of variations of the guillotine choke, making it a useful weapon for everyone. 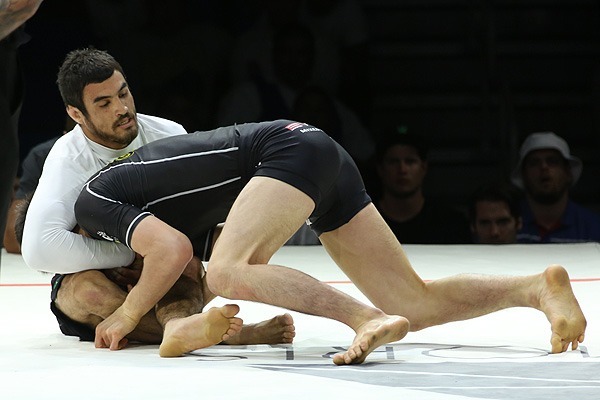 The guillotine choke position is easy. Grab someone in a headlock from the front, and connect your arms under their chin. If you really want to make it efficient, use the palm of one hand to cusp the chin of the opponent (the chin-strap). From there, through a multitude of grip combinations, you can choke just about anyone out in a matter of seconds.

How the guillotine works, though, is oftentimes misinterpreted by people. Let’s talk about the two “basic” kinds of guillotines and move on from there. You can either hunt for a guillotine that has an opponent’s arm included in your grip (an Arm In guillotine), or you can go for a guillotine only attacking the head. With both variations, people get the urge to pull on the head once they get the grip, though. Pulling on the head will rarely get you a tap, whether it is on the ground or with a standing guillotine choke.

Finishing the guillotine depends on the variation. With a regular guillotine, that attacks the neck directly, you need a side crunch to put pressure on the arteries. With an arm-in guillotine, you need to make sure the chin of the opponent is trying to touch their chest. As you can see, in both instances, you’re trying to get your chest closer to the back of their head, as opposed to pulling. This is just one way of making the guillotine ultra-powerful for you.

Choking People Before They Hit The Ground

The basic idea behind the standing guillotine is to prevent the opponent from posturing up. Only then can you achieve crushing pressure by forcing their chin towards their chest. Intestinally enough, arm-in guillotines are much harder to get standing, so first and foremost, choose the right variation – the direct guillotine choke. Secondly, make sure your opponent’s head is trapped tightly under your armpit. You’ll have to focus on figuring out the sweet spot between their neck and the crown of the head that gives you the most leverage.

As far as the grip goes, the ball in socket variation will give you the most bang for your buck here. Simply have the arm that’s around the neck in a fist, and clasp it with your opposite side arm over the back of that fist. Finishing is done not with pulling, but rather, by pushing your hips as far forward as possible. At the same time, you should squeeze the neck, and force the chin of their head towards their chest.

Finally, getting to the standing guillotine choke is best done from an underhook scenario, given that you’re going to be looking for a direct guillotine. That said, feel free to use any collar tie that works for you, as long as you get a solid snap down and don’t go fishing for the head while the opponent has posture.

One of the things that set the guillotine apart from other chokes is the number of possible variations, both standing and on the ground. A simple change of grip can completely change the dynamics and mechanics of this submission. In fact, with the standing guillotine choke, switching the grip can help you greatly enhance the power of the submission.

Nick Diaz has a variation of the standing guillotine choke grip that guarantees, you end up with a submission that’s a lot tighter. Namely, he likes to use the ball-in-socket, but he grips the arm on the neck from the bottom up. This grip helps you push the choking arm directly into the artery. It gives you a much better squeeze to go along with the compression you’re getting from pushing your hips up.

The figure four standing guillotine is arguably my favorite variation. The choking arm has to go a bit further on this one. More importantly, you’re going to lose the fist. Instead, you need an open palm so that you can make a figure four grip with your other arm which goes on the opponent’s shoulder. Extremely tight, but it will take some getting used to. However, you can easily finish this one on much taller opponents.

Finally, when you’re already in a great standing guillotine choke position, why not use a standing loop choke if there’s a Gi involved? All you need to do to finish is grab the lapel with your choking arm. Remember that for a tight loop choke, you actually need a loose grip on the Gi and you need the crown of the head under your armpit, rather than the entire head. Finish as usual from there on to get the tap.

Why not end a match as early as humanly possible? We’re all in it for the rolling on the ground part. I get that, but in a match, you want a quick tap. Why even go to the ground if standing guillotine choke can deliver on that? Moreover, be double smart about it – go fro the choke, and if it doesn’t work you actually have options to choose from, you can do a takedown, you can get a cradle, you can get the back… the options are plentiful.