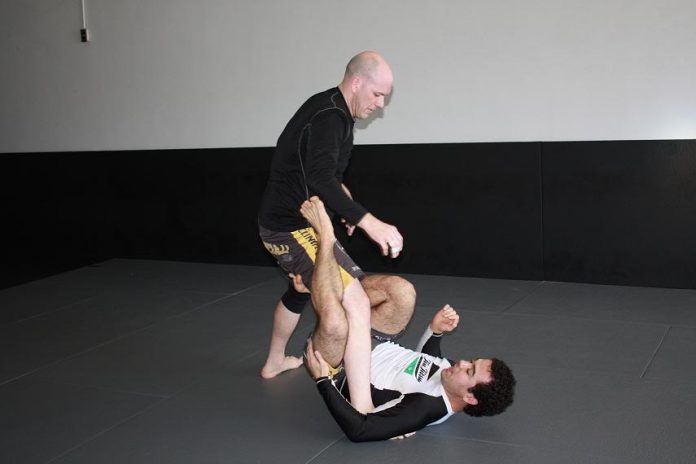 While the closed guard in BJJ is the most secure option from the bottom it is also the most limited one. It is by al lemans very effective but it does not offer plenty of directions to move in. This is due to the fact that when the legs are closed lots of options remain unavailable. The open guard though is far more versatile when you’re looking to attack from the bottom. That said, it is not as secure defensively as the closed guard, depending on which variation you’re using.

There are numerous open guards, each with its own pros and cons. So, when looking to have ultimate control along with plentiful attacking options, open guards that resemble the closed guard are clear winners. One of the most proficient open guards is by far the Single leg X guard, a sort of “hybrid” between the closed and open guards.

The Single leg X guard definitely is a member of the open guard’s category. However, the proximity of the legs means that it can utilize some of the closed guard’s advantages while remaining fairly versatile. The basic principle behind the Single leg X guard is one of the pillars of BJJ – isolation. The configuration of this guard completely isolates one limb, opposed to most other open guard variations. Using the whole body against a single limb is always a winning combination, which is why this guard is so effective. Formerly popular as a top sweeping position, the rise of leg locks have transformed this guard into a very dangerous attacking position as well.

The single leg X guard is a snake-like guard that focuses on limb isolation. The basic notion is using all of your body’s power against one of your opponent’s legs. In order for the guard to be effective, it is of the utmost importance to be able to control the whole limb, much like with leg locks. To do so, every joint of the leg must be under complete control.

Starting from the top, the hip of the opponent is controlled with the help of our legs. Basically, one leg is placed in and around one of the opponent’s legs, with the heel of the foot ending up on their hip. The other leg is placed with the shin on the inside of the opponent’s thigh, hooking the butt with the foot. To control the hip, The outer foot needs to be deep in the opponent’s hip fold. The most crucial aspect of Single leg X guard control is keeping the hips as high as possible on the opponent’s trapped leg. Furthermore, both knees have to be clamped tightly together. Also, remember that the outer foot must have the fingers pointing out. This is mostly due to the IBJJF knee-reap rule, but in fact, it does offer better control of the position.

Usually, it only takes one arm to successfully control the SIngle leg X guard. this leaves a lot of room to work with the other, which is essential to starting attacking sequences. The near side arm can control the opponent’s leg in two ways. One is with an ankle lock-like grip that goes around the ankle ending up with your palm on the chest. The other option is reinforcing your outer leg by grabbing your own thigh.

Controlling the Single leg X guard comes from correct weight distribution. The structure of the guard allows for controlling and attacking in multiple directions. In order to do so, though, you must make sure that you can stay in the position successfully. Apart from keeping the hips up and your knees together, you’ll need to utilize both feet as well. The foot on the hip needs to pull instead of pushing. If you use it to push, which is instinctive, you’ll open up space for your opponent’s defense. When you pull, on the other hand, you’re going to block the hip even further because their leg has to carry all your weight.

Correct weight distribution makes all the difference in controlling the Single leg X guard. IN that sense, once you know that you need to pull instead of push, it is all about the correct angle. When controlling the position, you need to make sure you’re putting pressure on the opponent’s inside thigh by pressing your shinbone in and slightly downwards. To achieve this just remember to constantly try and connect your inner leg knee to the shin of your outer leg. This is going to provide you with the right direction while the pulling motion is going to create the right angle.

The Single leg X guard is a close-distance guard that is played with the opponent basically on top of you. Your opponent is either going to remain standing or kneel with their free leg. Whatever your opponent attempts, you need to constantly keep the connection to the hip and the correct weight distribution.

In situations when the opponent manages to take your outer foot off, you can either go to the X guard or transition right back to the Single leg X.

First and foremost, there is more than one sweep available from this position. However, we’re only going to focus on the twisting sweep for now. This sweep is unstoppable, once you figure out how to maintain complete control from the Single leg X guard. The position of the guard itself is the reason for the sweep’s success.

Namely, the twisting sweep feeds of the guard’s positioning and mechanics. The angle of weight distribution means you can use the Single leg X guard to sweep in every direction. Normally, sweeping to the back, where your opponent has no posting options is the best. In order to execute the twisting sweep you;r going to have to take your hips even further up. This is going to result in even more weight on your opponent’s trapped leg, which in turn causes them to shift weight off their free leg. What this creates is an axis that you can use to take your opponent down. From the basic Single leg X position, lift your hips and do a twisting motion to the outside, while redirecting your weight in the same direction.

In most instances, you’ll complete the sweep without much effort. Against taller, or more experienced opponent’s though, you might need a bit more push. This is where the second arm comes in. Once in full hip extension and torque, if you still need more power, place your free arm on the mat. You then use it to push off the mats until your opponent crumbles to the floor. You’ll end up in a position very similar to the straight Ashi Garami, meaning you can choose your next step. You could either go for a submission or use a technical standup to get on top.

When rules are not so restrictive, you can have more freedom with your attacks. Once again the straight Ashi Garami is a viable option for heel hooks as well as ankle locks. Furthermore, you might go into a full knee-reaping position (Inside Ashi) or attack directly from the bottom.

In terms of directions, you can use the twisting sweep to land into straight Ashi or go a different way. One option is to go for an Omoplata-like movement of the leg, which is, once again, going to land you in straight Ashi. Furthermore, when reaping is allowed you can look to insert your outside leg in between the opponent’s legs, getting to top Inside Ashi. this is especially effective against seated opponents/

Transitionally, the Outside Ashi and the 50/50 are also very close to the Single leg X guard. In both cases, it is a combination of your opponent’s reactions and your attacking direction that determines which one is the better option.