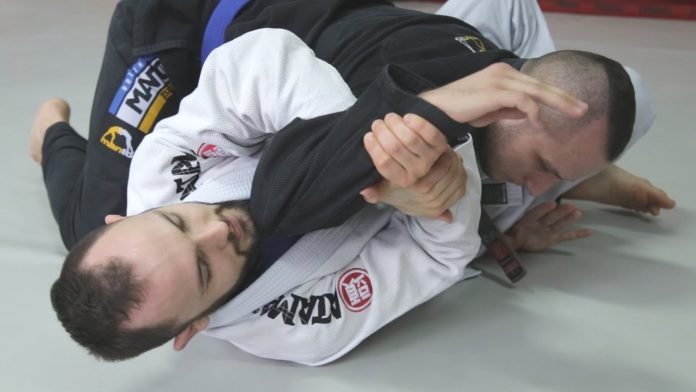 Whenever you get caught in a bad spot in BJJ, the first reaction is to get out. AS you’ll see from this article, and subsequently, experience, this is not the best approach. Yeah, escaping is good, but how many times have you given up submissions in the process? There’s a reason why certain position brings you so many points – they’re dominant. Now, that doesn’t mean that you can’t get away. It also doesn’t mean you can’t launch devastating attacks of your own. After all surprising someone with stuff like bottom side control submissions is one of the best ways to win a match.

As a position, side control is awesome. You get to project weight on the person on bottom and you have a bunch of variations to switch between. Plus you can submit with just about any kind of submission. If you’re the person on the bottom, you have to endure weight, look to fend of submissions and all the while try and get out of the position. That’s a lot of work for anyone, regardless of level. Well, have you heard the quote “work smart, not har”? It applies perfectly to bottom side control. What would be the perfect way of completely turning such a bad BJJ position to your advantage? How about a few nasty and effective bottom side control submissions?

You might often hear something like “there are no bad positions in BJJ, just more difficult ones’> Well, let me tell you that this is not true at all! IF you’ve ever had a black belt on your back or a 100+ heavier competitor in side control you know what I mean. Not to mention all the 50/50 and leg lock craziness of today. Bad spots certainly exist and if you need more proof, just take a look at the point system in Jiu-Jitsu. Do you know all those spots that bring you a bunch of points? Try not to get caught in them. They’re the bad spots.

That aside, bad spots do not necessarily mean a match is over. As you know, there are few answers to any question in BJJ. The only thing you need to do is actually ask the correct questions. In terms of side control, it is not about escaping. Sure, getting out is the ultimate goal. However, the first and most important goal is staying safe. No point in wasting time and energy escaping just to end up in an armbar right? So, whenever you’re on the bottom, stick to the well known defensive principles – keep your elbows close, protect your neck and try to create distance. Only then can you think about the next step.

Speaking of the next step, let’s look at some “lazy” BJJ for a change. Instead of bridging and doing other energy-consuming stuff, why not get a submission of your own? What’s that? There are no side control submissions from the bottom? Well, that’s not the case at all. In fact, there are several, and the only thing you need to know is which of them work, and which will get you in even more trouble.

Before we go into the submissions themselves, let’s talk principles a little bit. We already covered that you need to stay safe in bottom side control first and foremost. When you’re looking for submissions from there, you also need to know one important thing – you need to be effective. That mans nasty, sneaky, surprising, fast little submission holds that don’t require elaborate setups. To that extent, you do not have many options that won’t leave you exposed. However, the four submissions we’ll go over her are the exception to the rule. They work at the highest level of grappling and are applicable in both Gi and No-Gi Jiu-Jitsu.

The most famous of all bottom side control submissions is the reverse triangle choke. It is also a move many claims won’t work. Well, the trick, as you might know, is in the details. Once again, for a successful reverse triangle from the bottom side, you need to be safe at first. Next, you want correct arm placement before you et into the submission itself. What you want here is to trap the arm that’s under your head. This is imperative. From there, turn to the side, catch the opposite arm with your legs and remain there as long as you want. You’re safe. To finish, simply push on the head and warp up the triangle.

The D’arce choke, as I’ve stated on multiple occasions is my one favorite choke out there. One reason for that is that you can slap it on from virtually anywhere. Speaking of anywhere, bottom side control is definitely one of the best position to set it up. For this, you need to have an overhook around the arm that’s near your hips, unlike the triangle. That’s all. This will keep you safe and make your opponent move into the D’arce themselves. All you need to do is rotate to get your head under their hips. Form there, the arm you have overhooking theirs is all set up for the choke. Just get the figure four grip and finish right there, or sweep and tap from the top.

This is one of the most attractive submissions in all of BJJ not just among bottom side control submissions. It is an innovative move, proven to work at black elt by its founder, Oliver Geddes who is a Roger Gracie black belt. For the Squirrel Lock, your focus is on the far side arm once again. This time, though, you want to grip the wrist and place your nearest knee-deep inside the crook of the elbow. Once again, this is your position zero safe spots. Form there you use the other leg to establish a figure four grip on the arm.IN essence, you finish with a Kimura with your legs from the bottom. Or, you can roll the opponent on their back and get them from the top. It’s up to you.

We left the simplest and sneakiest of our bottom side control submissions last. Many people think the Americana from the bottom is just a waste of time. However, if you get it right, it can actually turn into your go-to move from bottom side control. This is, in fact, a Hail Mary move that works when you’ve missed out on staying safe as your number 1 goal.

When an opponent tries to get you with an Americana and has their grip in, you need to think of your own submission. First, though, you need to keep your arms safe by grabbing your own wrist with your free arm. Then, use this to roll your opponent over so that you’re not only safe, bot on top. Finally, the Americana is going to be right there for you to return the favor.

Submitting people is what we’re all in BJJ for. Do not let anyone tell you otherwise, we’re all looking for that tap any chance we get. The satisfaction of submitting someone is even bigger when it comes as a complete surprise. These bottom side control submissions are guaranteed to both get you fast taps and lots of satisfaction. You just need a bit of drilling to get used to them.