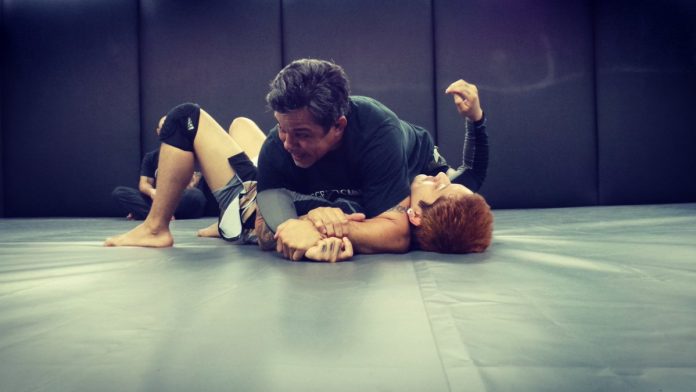 Contents hide
There are some submissions in BJJ that have been there since the inception of the sport. The rear naked choke, the armbar, the guillotine etc. are all fine examples of this type of submission. You see all of them in training and competition on a very regular basis. Yet, some of these original submissions are perceived as not completely reliable today. One of those that is mistakingly considered as inferior is the BJJ Americana. This bent arm lock has the power to finish fights very quickly, yet is often overlooked. Let’ try to correct this by looking at how you can use it from multiple positions in BJJ.
Bent Arm Lock Submissions
BJJ Americana From Half Guard
Mount Americana Setups
Side Control Attacks
Sneaky BJJ Americana From The Bottom
Check Also:

There are some submissions in BJJ that have been there since the inception of the sport. The rear naked choke, the armbar, the guillotine etc. are all fine examples of this type of submission. You see all of them in training and competition on a very regular basis. Yet, some of these original submissions are perceived as not completely reliable today. One of those that is mistakingly considered as inferior is the BJJ Americana. This bent arm lock has the power to finish fights very quickly, yet is often overlooked. Let’ try to correct this by looking at how you can use it from multiple positions in BJJ.

The BJJ Americana lock is a bent arm lock. It is very often mistaken with its sister submission, the Kimura lock. The main difference between the tow is the direction in which the hand is in relation to the elbow. For a Kimura, you need the hand to be closer to the opponent’s hips. For the BJJ Americana, you want the hand towards their head. Both fall within the bent arm lock submissions family and have fairly similar mechanics. Both submissions can also work as a mini-system, transitioning from one to the other until you get a tap.

However, employing such a system means you really know how to do both these submissions. Now, most of you have no doubt, learned the BJJ Americana as part of the basics curriculum. However, have you used ti much since your beginner days? If the answer is no, you need to reconsider. After all, this submission move is a direct product of the Gracies and we all know how they loved being effective. The BJJ Americana involves much of the same principles as other Jiu-Jitsu submissions. You need to be in a dominant position, you need to have control and apply proper braking mechanics. So let’s deconstruct the BJJ Americana lock and all the ways you can set it up.

Kurt Osiadner is as old school as it gets. So, when he comes out with an instructional on fundamentals, you do not say no. Improve all your foundational moves, the Americana included with the “Fundamentals Of A Jiu-Jitsu Renegade” Kurt Osiander 4 DVD Set!

The basic mechanical idea behind bent arm submission locks is to use angles and wedges to cause a break in the shoulder joint. In order to be sure you are efficient with such locks, you need to know which positions the work from. Having a dominant position that lands you a mechanical advantage is key for finishing a bent arm lock. Before we get into positional strategies, let’s understand how the BJJ Americana submission works.

What you need for a BJJ Americana is control over all three joints of an opponent’s arm. As it is a bent arm lock, you must look to have the arm bent at the elbow at a 90-degree angle. To perform a BJJ Americana submission you need to be facing your opponent. The goal is to fix their wrist to the mats with the help of one of your arms. For the Americana, it needs to be the same arm as the one you’re attacking. Next, you need to insert the wedge. This is your second arm that goes underneath the opponent’s upper arm and then reinforces the wrist grip. Just like with the Kimura, you need to figure four your arms. The arm you threaded under the upper arm goes on top of the other one.

In terms of control, the grips of both arms directly control the wrist of an opponent. The shoulder joint is pinned as a result of the wedge with the arm under the opponent’s upper arm. Finally, the control over the elbow is indirect and is due to the 90-degree bend.

Finishing requires you to pin the hand of the opponent to the mat and lift their elbow. It is known also as the paintbrush submission, due to how you drag the opponent’s hand across the mats.

BJJ Americana From Half Guard

The half guard is a very common position for hunting Americans. Whenever you’re in top half guard, remember that you need to attack the far side arm. This is going to ensure your opponent is on their back, which is crucial for control.

Whenever you find yourself in the top half guard, you need to make sure you deny your opponent an underhook. It’s not the end of the world if they get it, but a Kimura is the better option in that case. For a BJJ Americana, you need to pin the opponent’s wrist down to the far side mat. Whenever an opponent tries to frame from the bottom, you have an open path. Once you pin the wrist, shift your weight completely on top and proceed to insert the second arm. Since the half guard is somewhat limiting, if you lag with the finish, simply switch your hips again and you’ll expand the range of motion. An easy and tight submission to beat every opponent!

The mount is the quintessential American hunting position. it offers the best mechanical advantage for getting the lock. It is also the perfect option to use against someone defending chokes and armbars. Namely, whenever an opponent has their arms T-rexed, you simply use the position against them. Place one arm on their wrist, and another on the elbow and use your body weight to force the arm to the ground.

Once there, first make sure the opponent cannot retrieve the hand. To do this, push the elbow of your nearside arm into the side of their head. This is going to break their posture and keep them pinned. Once you have that you can think about threading the second arm through and getting the figure four. IF you’re up against a bigger opponent you can even sue your forehead to reinforce the figure four grip. finishing is really easy as you have loads of space to move the arm.

The top side control is another great position for getting the BJJ Americana. What you need to remember is that side control is, in essence, a very dynamic position. So, in order to get an Americana, you’ll need to distribute your weight properly.

Once again, you’ll use the opponent’s frame against them. For the initial grip, place your hip side arm on the opponent’s biceps. You’ll use it to pull the opponent’s arm away from their body so that you can place the wrist grip in. From there on you proceed to pin the arm to the ground, just like in the other instances.

This is where a key detail comes into play. In order to avoid going forward for the finish and ending up reversed, you’ll need to adjust the grip. To do this, make sure you use the arm grabbing the wrist to roll the opponent’s arm away from them. This’ll ensure a very tight angle an easy finish without compromising your base. Also, remember to use a monkey grip (no thumbs) whenever you hunt for bent arm locks.

Sneaky BJJ Americana From The Bottom

AS a rule, doing Americans from the bottom dos not have a very high percentage. However, in certain instances, it can surprise your opponents and get you top position at the very least.

Bottom side control is a top position fro sneaking a BJJ Americana in. You’ll need to remember that you have to focus your attention on the near side arm. This is the one that often goes under your head. In order to get the Americana, you can’t let the opponent place the arm under your head. You need this arm in front of you so that you can establish your grips.

The idea is to grab the wrist of the arm with your opposite side arm. Once you have that grip, you place the second grip by wrapping the other hand over the opponent’s upper arm and into the figure four grip configuration. Finishing the lock is a bit different to top side Americans, as you’ll bend the arm at a different angle. Your goal is to force their arm towards the opponent, thus putting immense pressure on their shoulder joint. In the worst case scenario, the opponent is going to fall to their back in an attempt to escape. This gets you to top position with a fully locked Americana ready to go.