Why do people train in martial arts? You’ll get as many different answers to this question as there are people training. Whether it is competitive aspirations, “just” recreational, or philosophical though, everyone has to go through the same grading process. Martial arts are all structured around a grading system that has been used for more than a century. BJJ is no different and has adopted the belt system as a direct result of its Japanese origins. But don’t let yourself be fooled by Jiu-Jitsu belts. The belts do not always present the true rank and knowledge of a practitioner.

The Story Behind Jiu-Jitsu Belts

Brazilian Jiu-Jitsu is an art that is notorious for the time a practitioner needs in order to achieve a belt. It’s not the just black belt that we’re talking about, getting to blue is just as hard, if not harder! It takes about 10 years for the “average” grappler to reach the black belt. However, that number is just a loose average. Apart from exceptional talents, the road to black belt is filled with obstacles.

Jiu-Jitsu belts are earned in a very specific and foolproof manner. There are rarely promotions based on demonstrations or exams, as the case is in other arts. BJJ has probably the most realistic reasoning behind promoting a student to the next level. The idea is that an instructor looks at the complete manner of conduct of a student. How a student learns new techniques, the way they roll, competition performances as well as a state of mind and behavior on and off the mats, all have a part to play. While competition is not a requirement for everyone, most of the others, especially proper behavior, and technical knowledge are.

Most people, however, have family obligations, a job outside of Jiu-Jitsu, and will, at some point, get an injury on the mats. All of these factors can largely influence the time they spend at a certain belt level. It’s not as easy as just counting the years, but showing up to class half a dozen times a month. Success requires consistency, and BJJ is so complex that the only way to keep progressing is to be consistent with your training.

Under perfect circumstances, a BJJ student spends about 1,5 – 2 years at a certain belt level. In reality, though, conditions are never perfect. 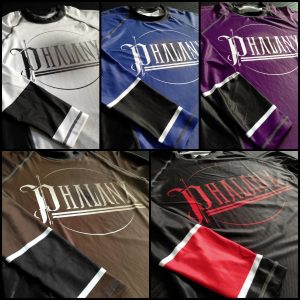 10th Planet Jiu-Jitsu practitioners have a useful saying stating that “you should never trust a ranked rashguard“. Now, although they are an exclusively No-Gi school, the saying is applicable to everyone training BJJ.

Given the amount of time it takes to earn a belt in perfect circumstances, the level of students at a certain rank is highly variable. It is normal for two blue belts to be at a completely different level, despite rank. One might be a recent promotion, while the other has been ranked blue for a couple of years. Although both are ranked the same, their knowledge level and experience is very different.

In another scenario, an injury or life issues keep a student away from the mats on a constant basis. Although they fulfill the time required for a new belt, they do not possess the knowledge to progress. Or, completely opposite, they haven’t been consistent, but have a knack for learning. They might be at a very different level practically, but due to requirements, they haven’t yet been promoted.

Hence the above saying regarding the ranked rashguard. A purple belt might not be at the purple belt level, or one may be near the black belt level. The rank never outlines a student’s true level of capabilities.

Another pressing issue in the BJJ community is one of the fake black belts. Where progressing through the Jiu-Jitsu belts is an honor to some, to others, it’s just business. Although the community very publicly condemns such cases, they are becoming more frequent.

In the case of undeserved black belt promotions, due to financial incentives, it’s a whole different level of issues. When a student is kept at a certain rank, or promoted beforehand, they can make up for it by staying at a different rank for longer/shorter. A black belt, on the other hand, carries way more responsibility. They are responsible for future promotions, teaching others, and representing the art at the highest level. Fake black belts dilute the quality of the rank and give BJJ a bad name.

When choosing an academy, be wary of who you learn from and their promotion policy. Stay away from the financially motivated instructors and make sure you put in time on the mats.