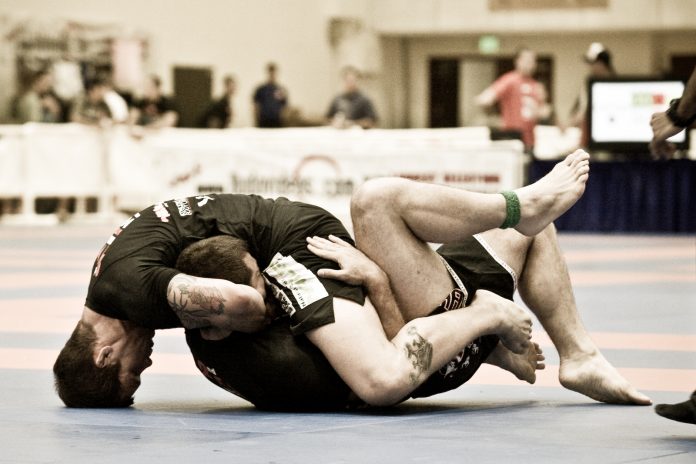 They say you always remember your first. Well, if they were talking about BJJ submissions then it is true. My first was an arm triangle (or I thought it was) against a fellow white belt after probably a month of training. From there on I was hooked. Every aspect of Jiu-Jitsu is fun, there’s no denying that but submissions are something else. It is the ultimate “victory” for any grappler. There’s a good reason why they’re so sweet. Submission is no easy feat, especially against a resisting, experienced opponent. It takes a lot of hard work and immaculate positioning to get a tight submission hold on someone. So, how do you go about improving your submission game? By supplementing your class knowledge with the help of the best BJJ DVD for submission hunters, of course.

When it comes to the one best BJJ DVD for submission hunters, the choice is not an easy one. There are a lot of variables to take in such as your favorite submission, the position you’re hunting it from, your opponent’s reactions. All these have to be taken into consideration when choosing a tool to help you polish your “kill” moves. In order to allow everyone to fine tune their favorite submission, we bring you the very best BJJ DVD for submission hunters in each category.

Submission hunting is an art form of itself, within the realm of the Gentle Art of Jiu-Jitsu. The beauty in grappling martial arts is that with submissions, you leave no doubt about who the winner is. IT’s the ultimate simulation of a lethal outcome. The tap is an acknowledgment that death or debilitating injury was certain. That’s the spirit of martial arts embodied, right there.

However, we all know that people can be conspicuously biased towards submissions. Not everyone likes every submission, and even sub-only world champions tend to gravitate towards a select few moves. I’d wager that a young Eddie Cummings would’ve gone for a leg lock DVD over a triangle choke one. So, when we look for the best BJJ DVD fro submission hunters we have to take their affinities into account.

Apart from favoritism, there are a few other factors that have a significant influence on the choice of submission fro a grappler. One is body type. One great example is Keenan Cornelius. He is a very lanky and slim grappler, that uses his build to great success in grappling. If you’re 5’2″ with short legs and arms you can’t expect to use Keenan’s moves as he does. Injuries are also a very important part of the puzzle. Inverted guard setups to submissions are not the best bet for someone with a neck hernia. Everything matters when we’re looking for the best BJJ DVD for submission hunters.

In a very cool instructional series, prominent grappler Josh Hinger deconstructs the guillotine choke down to the bare essentials. His Hingertine series does not just show the conventional aspects of the choke, but also his numerous and very intriguing modifications.

For all those that favor choke holds. especially from the front headlock position, this one has to be on top of the shopping list. You won’t just get a host of finishing details never before revealed, but also efficient setups from both top and bottom position. A complete and comprehensive game for all guillotine lovers out there!

After Danaher went on to feature in THAT Joe Rogan podcast, the world of grappling changed for good. Everyone knew that he was a mastermind but nobody really understood to what extent his genius goes. Normally, the murmurs about no Danaher DVDs on the market just became louder and louder. And Hojn Danaher responded as best he could – he started filming.

No matter where you live if you’re a grappler you know the Danaher Death squad. Their competition success is undisputed and most of it is due to Danaher’s coaching. Whatever your favorite choice of submissions is, you can’t skip over the “Enter The System: Front Headlocks” instructional that just came out last week.

You might be surprised that it is this title that Danaher’s contribution to the Best BJJ DVD For Submission Hunters collection. Well, people do not use the front headlock that much in grappling. Even when they do they focus on just a guillotine or going to the back. Danaher’s DVD is going to change your approach. He goes deep into all the benefits of the front headlock position before going step by step over every option you have. Guillotines feature like never before, both from the top and bottom positions. He also offers timeless principles and concepts that make this position effective. Oh, and it is an 8 DVD set, meaning you get to listen to Mr. Jiu-Jitsu for well over 10 hours!

LEG LOCKS – Down Under Leg Attacks by Craig Jones

Until Mr. Danaher himself uploads an instructional (or 10) on the subject of leglocks, this remains the top resource available. Craig Jons is the only one that truly compares to the DDS guys. What’s even more impressive is that he doesn’t really try to reverse engineer their system to the T, but works on his own.

Over 4 DVDs young Jones shares his heel hook secrets that revolve mostly around entries. A really useful feature of his, for me, are his concepts on countering usual defenses. You’ll get attacking options off of the running man escape, the butt scoot, and all the other legitimate leg lock defense options. If there’s one digital release that has to be the universally best BJJ DVD for submission hunters, then we choose this one.

Now here’s one for those prone to adventure. Wrist locks are not your everyday Jiu-Jitsu submission, to put it mildly. Being underrated doesn’t mean they’re inefficient, though. Quite the opposite, they’re one the most high-percentage submission moves in grappling martial arts.

Eder systematizes this big unknown in the BJJ world much like Danaher does with leg locks. From the low of opposing thumbs all the way to a spiderweb wristlock setup, you’ll learn it all. Embrace the dark side completely and add this DVD to your collection immediately. It’s useful for grapplers of all levels!

The Armbar is one of the most used submissions in Jiu-Jitsu. It’s right up there with the rear naked choke as the highest percentage submission move available to grapplers. Go to any BJJ tournament and you’ll see more armbar finishes than any other joint lock there is.

Diego Gamonal went above and beyond in sharing his knowledge of this staple submission in his invisible Armbar set. The best part of it? This submission is everywhere. You can attack with it, counter with it and even use it defensively. Armbar enthusiasts, your quest for the best BJJ DVD for submission hunters is over.

In the category of bent armlocks, we had a tie of sorts. Even though it is not the same submission, it concerns the same principle and the same joint. So, when hunting for the shoulder lock, we decided to go with the Kimura and Omoplata.

When talking about the Omoplata and learning from a prolific DVD set, the choice was pretty straightforward – Bernardo Faria. The multiple World Champion has the ultimate instructional on this highly effective shoulder lock. While this title is named “Omoplata Everyone” you should note that you’ll also be able to do it from everywhere. And not just the regular Omoplata. The Monoplata, a “crush the chicken”  Oomoplata and plenty more variations are fully explained.

The Kimura Machine by Fabio Holanda

While on the subject of bent arm locks and shoulder locks, there’s no skipping over the Kimura. Fabio Holanda is ruthless with this move and he knows how to pass that knowledge along. The set is simply and precisely structured. The first DVD focuses on the bottom setups and mechanics of the Kimura. the second one is all about top position Kimuras that’ll submit any opponent you come against!

Now, this is not by any chance a list that covers every possible submission category and has a recommendation for each. It is merely a guide to supplemental learning material for the most effective submissions known to man.