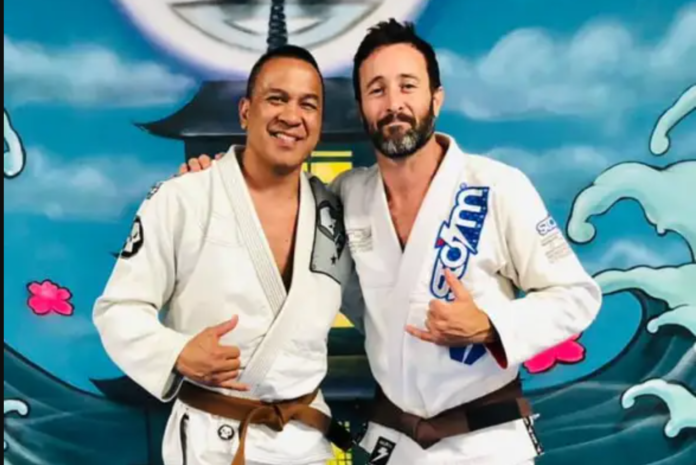 Brazilian Jiu-Jitsu is an activity that many celebrities enjoy, especially actors. While most opt for private lessons and Jean Jacques Machado’s unique BJJ system that keeps them from getting harmed, some go all the way and make it to black belt, competing and winning along the way. One such celebrity is Hawaii 5-0 star, Alex O’Loughlin.

Hawaii 5-0 star Alex O’Loughlin and his co-star, Scott Caan are both avid BJJ practitioners, as has been documented through the years. Caan had the jump on O’Loughlin, having practiced the sport for nearly two decades, earning his black belt in 2016 after 15 years of grappling.

Alex O’Loughlin has been training with Caan since the Hawaii 5-0 show started, with the pair learning from BJJ and MMA legend Enson Inoue on the island. At the ADCC 2022 open, which took part just before the professional part of the tournament, O’Loughlin was promoted to BJJ black belt right there on the mats.

The 46-year-old actor was left in tears after the great achievement, and left without words:

“I don’t know what to say. On behalf of my training partners, everyone whose been a part of my journey, thank you. I have to say with all of my heart and all of my love. Thank you to Egan Inoue for the first 10 years of my journey. It’s one of the only things that I understand to be a purely solitary venture that requires everyone. It’s an honor.”

Alex O’Loughlin is just one more in a long line of Holywood celebrities that are finding BJ Jnto be the perfect activity for them. Now a BJJ black belt, of course, potential hypothetical matches between him and other brown/black belt high-profile celebrities immediately spring to mind. Who knows, we might just see one of them materialize, with the likes of Sean Patrick Flannery and Dave Mustang being quite the grapplers in addition to their world-famous acting/singing skills.