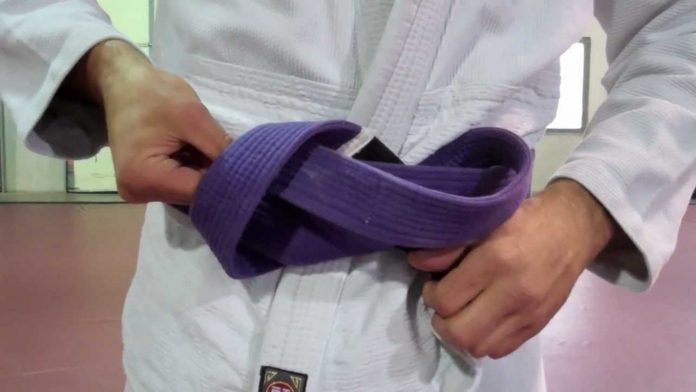 Remember the first time you walked into the academy with a GI on? Figuring out how to put on the GI wasn’t much of a task for most. The belt, on the other hand, is a whole different story. Older students regularly get a show out of beginners and their new belts. After all, not everyone knows how to tie a Jiu-Jitsu belt right off the bat.

Granted, most people that have trained in a traditional martial art before BJJ might have a greater understanding. Apart from Judo though, most other martial arts require little to no grappling. This means that the belts don’t get much commotion and can stay tied during the entire class. So, the original way of tying the belt suffices. In grappling arts, however, belts get undone regularly, so different ways of how to tie a BJJ belt are available.

How To Tie A Jiu-Jitsu Belt

When it comes to tying a BJJ belt, several options are available. While some people don’t mind the belt coming undone, others prefer it stays tight. Depending on the game, people might want a looser belt if they play a lapel based attacking game. Alternately, a pressure passer would prefer not to give out weapons to a worm guard player, opting for a tighter knot. This is where different methods of tying a belt come in.

There are a few distinct methods of how to tie a Jiu Jitsu belt. Here, we’re going to focus on four different ways that demonstrate how to tie a BJJ belt. These four options are the most used varieties and each has its own strengths and weaknesses.

The first method is as basic as it gets and is most widespread among martial arts practitioners. This is the method most people in BJJ utilize today, especially those with no prior martial arts background. It is a tight option, but it doe come undone often.

The most basic manner of tying a BJJ belt starts with identifying the half-point of the belt. This is then placed below the navel and both ends are passed behind. Once behind the back, both ends are crossed and passed around, so they meet again in the front. Once there, it is important that both ends are the same length. Next, the right strand is folded over the left and then looped under every layer of the belt from bottom to top. Ultimately, by folding the bottom strand over the top a knot is created.

This method is specific to BJJ and often utilized by competitors. It offers the tightest tie and is hard to get undone. Competitors favor it for this very reason, as undone belts can get in the way of a match. Originally, it is the way Judokas used to tie their belts.

The method begins identically to the basic way of tying. It is the looping process that is different. First, the middle of the belt is found and both ends are passed around and back to the front. From there the left side is crossed over the right and pulled under all layers of the belt, coming out on top. Now, the right side is passed through the first layer of the belt toward the left, but not completely tight. This forms a loop for the bottom side to go through. After tightening, the result is the tightest knot available in BJJ.

While it is the original way in which the Gracies tied their belts, this method is the most insecure of them all. It is one rarely seen today. The method doesn’t differ in the first steps, as the belt is passed around to the front again. When it comes to creating the knot, the ends are not looped through the layers of the belt, but rather tied directly in front.

People coming from striking martial arts that employ the use of GIs, like Karate, have another specific way. These practitioners have developed a method that is very neat. In terms of security, it offers the same level as the basic method. While not as secure as the BJJ way, it certainly is tighter than the Gracie way.

For the Karate way, one end of the belt is held at the hip, mostly on the left side. From there, the other end is taken around the back and forward, over the first end. This results in only one strand available at the front. This strand is then taken under all layers, bottom to top, as in the first two methods. The knot is formed identically to the first method (the basic way).

This one is the most interesting ways to tie your Jiu-Jitsu belt! It’s definitely unbreakable. Essentially it’s a normal, granny knot and then you come back with a follow through and belt got it’s impossible to break shape.

And when it comes to holding your GI in BJJ. First, you’re tieing a granny knot at the end of a belt and then you go around your waist with the other end bringing both ends together in front of you. Basically, you’re tieing a water knot and then you’re adjusting a belt few times. You can check it all in a video below as it’s a bit hard to explain. But, what’s important it’s really unbreakable knot to hold your GI and 100% it won’t slip. It’s called Double Water Knot.

So, next time you wonder how to tie a Jiu-Jitsu belt, keep in mind that there are more ways than one!