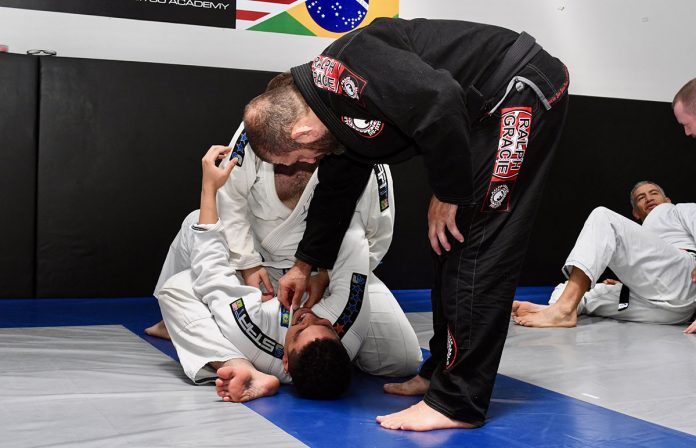 Ralph Gracie is one of the Gracie family members who is known for their, aggressive streak. Robson Gracie’s son is as legit a BJJ black belt as they come and is also one hell of a teacher. Just one look at his stable of high-level black belts and you know that Ralph Gracie’s teaching methods obviously work. Even if they’re a bit on the violent side. Today, we look at the Ralph Gracie “hit them on the head” teaching method.

Brazilian Jiu-Jitsu is very relaxed in terms of class discipline. This is not to say that people do whatever they want during technique demonstration. It just means that a lot of the traditional martial arts behavioral rules are not really enforced. There are no customs the like of you have to sit like this or that, or bowing to the ground before you address the instructors. Most often you’ll witness someone cracking a joke or two, of,  course, within the bounds of respectful behavior. BJJ is and that takes place in a relaxed environment, allowing people’s creativity to rise to the surface. As such, punishments for lack of disciplines are rare and few between. Unless you train with Ralph Gracie.

Ralph Gracie is one of the legendary Gracie family members. He is a brother of Renzo and the owner of multiple academies across California. Ralph is also a distinguished MMA fighter as well as a proficient grappler. So, when he decides to base his teaching on a “questionable” method, you can hardly hold it against him. His pedigree is enough to justify the use of some “antiquated” teaching methodology. Or is it?

Ralph Gracie is the son of Robson Gracie and grandson of Carlos Gracie, the founder of the Gentle Art. He is also the brother of Renzo, Charles, and the late Ryan Gracie. You can see how his family helped him up to be one of the most fearsome grapplers of today.

Born in 1971 in Rio, Ralph Gracie grew up in a family full of formidable fighters. As with many of the other Gracie family members, Ralph began training very early in his childhood but really took it up a notch as a teenager. His immense strength fro a skinny kid was legendary in Rio after he became notorious as a street fighter with immense punching power. Ralph got his black belt from his uncle Carlos Gracie Jr.

Ralph Gracie was also a pioneer of Vale Tudo and No-Holds-Barred fighting. It is in this circuits that he made his name as a tough opponent. After some time of fighting in MMA during the 90s, Ralph decided to start his own academy. He chose California as his region of operations and opened up a school in San Francisco. He started off with the help of his cousin, Caesar Gracie and ended up expanding significantly. Today, the Ralph Gracie academy has four schools in San Francisco and two more in Orange County. Apart from the number of schools, Ralph is the mentor and teacher of very prominent BJJ black belts. Some of them include Kurt Osiander, BJ Penn, the Camarillo brothers, Scot Nelson and plenty more.

Make A Mistake And I’ll Hit You In The Head!

Now, this is a method that most people reading this probably never experienced on their own. It was a common method of teachers in schools all over the world at the start of the previous century. Teachers often stroke kids with thin sticks, mostly on their arms or slapped them on the head as means of enforcing certain points. As teaching methods progressed, this was deemed cruel and excessive. Today, an act like that in school equals assault.

As you can see from the video, Ralph likes to use striking as a teaching method. According to the Gracie black belt, this helps his students learn faster. It also keeps students that make mistakes from repeating them regularly. In al honesty, Ralph Gracie si not the only one in the BJJ community who likes slapping a student or two when teaching. Recently, information came out that John Danaher also reverts to striking disobedient students as a means of enforcing discipline.

Consider this before we look into the possible effectiveness of this method. Ralph Gracie is as old school as it gets. Now, THe Gracies originally learned their trade from Maeda, and the Japanese are notorious for enforcing discipline this way. Furthermore, Helio and Carlos were part of a generation used to physical punishment as a means of motivation. Given the old school pedigree of Ralph, it is not surprising that he still keeps this tradition alive. Is it worth doing it? Well, if his students are anything to judge by, BJJ instructors need to take up this practice as soon as possible.

In the modern world of political correctness, hitting someone as a means of teaching is nothing short of a crime. The concept of negative reinforcement, which “pedagogical” slapping represents, is all but abandoned in favor of positive reinforcements. While rewarding people for correct behavior is effective and arguably “more humane”, there should also be a place for negative reinforcement.

Should negative reinforcement techniques come in the form of strikes to the head? My two cents on it are that in the case of classrooms full of children, the answer is absolutely not. In a very competitive martial art that involves sparring, this is simply part of the sport. In more traditional martial arts, old school teachers often revert to many forms of “punishment” in order to enforce a point. Does it have to strike to the head? Of course not, but this method has its place in the sport of Brazilian Jiu-Jitsu.

If you’re training with Ralph Gracie though, be careful. the legendary coach might not find it enough to just strike you if you slack. Instead, you might even get a bite on the head as a warning!