We keep going with our BJJ Home Workout Series/ This time, after some advice on packing on muscle, and an article on how to shed fat, we’ll look at how to retain most of your grappling skills while away from the mats. In that sense,. it goes far beyond jsut doing a few hip escapes at home. Or annoying your significant other that doesn’t train, for that matter. There are ways to set up grappling specific training from home that will definitely help you actually perform better once Jiu-Jitsu gyms re-open.

Grappling specific training at home is possible. That’s probably the first thing we have to make clear in a time like this. If you’re stuck at home without equipment, you’ll find it a bit more difficult, but far from impossible. If you’ve got some gear lying around (which most people nowadays do) you’ll find your home BJJ workouts to be a lot more fun. At least the grappling specific ones. That said, training at home will, as always, require discipline. Unless you’re blessed with a family member or a significant other that trains. And you have mats at home. in which case we don’t like you very much at this moment.

How to train grappling at home? It’s not hard, but you need to actually train grappling. That means forgets about dressing up chairs and ladders in BJJ Gis in order to train. that’ won’t do you any good. Brazilian Jiu-Jitsu is about timing and reactions for the most part, and that is exactly what you can’t train at the moment. This means you can focus on the second most important aspect of training – movement.

It goes without saying that you can train movement using your bodyweight only. However, you’ll need to organize everything a bit more precisely than just doing hip escapes and bridges for reps. That’s something that better fits a fat loss workout as we talked about before. If you’re training for grappling, it’ll require you to organize things a bit more differently. Speaking of which, if you’re looking for muscle pump or feeling out of breath, you should probably check out some other parts of our BJJ Home Workout Series.

Grappling specific training ha to center around movement, as I said. That means you’ll need to connect different moves in series in order to really get something out of it. In other words, whether you’re training with equipment or without it, the focus should be on creating little scenarios that mimic what happens in the gym. There’s one catch, though, which is not exactly a drawback. that is that you’ll need a bit more space for grappling specific training compared to muscle gain or fat loss training at home.

Training With No Equipment

On the subject of movement-based grappling specific training, it is all about the fundamentals. The one movement that you have to know in BJJ is the hip escape. Luckily, this move is so diverse, it is incorporated in most other movements, as well, like the bridge, technical stand up, etc. Even on its own, the hip escape has a bunch of variations you can do. throw in an inversion or two, whether it si Granby roll or something simpler and now, you have s fun routine to play with.

Hip escapes to turtle with front Granby rolls to a closed guard are one example. Bridging to a hip escape, scooting to a technical stand-up and doing a penetration step is another. Feel free to experiment as much as you want to.

Or, if you’ve got enough space, don’t overthink it. There’s something called Ginastica natural out there that has plenty of combination movements ready for you. It is a system developed by a Brazilian called Alvaro Romano. You can read all bout it here, but for now, know that it is a combination of BJJ specific movements, yoga, natural movements, and breathing. It is something people like Rickson have used to get ready for competition. All you need to pull off this type of BJJ home workout is a bit more space. Like for example, moving that dining table out of the way so that you can move and wiggle around. It will be more than worth it, though.

One thing you absolutely have to do is a Turkish get up. A simple Turskish get up workout will do wonders for your grappling, providing you with balance, core strength, coordination, and even some BJJ specific movement muscle memory. throwing in a press or a fly here and there at different stages of the Turkish get up will only make things harder, and more grappling specific. All other movements usually done with a kettlebell are gert fro grapplers as well, but it is with get up, Russian twists, bottoms up presses, etc that you actually get grappling benefits as well. 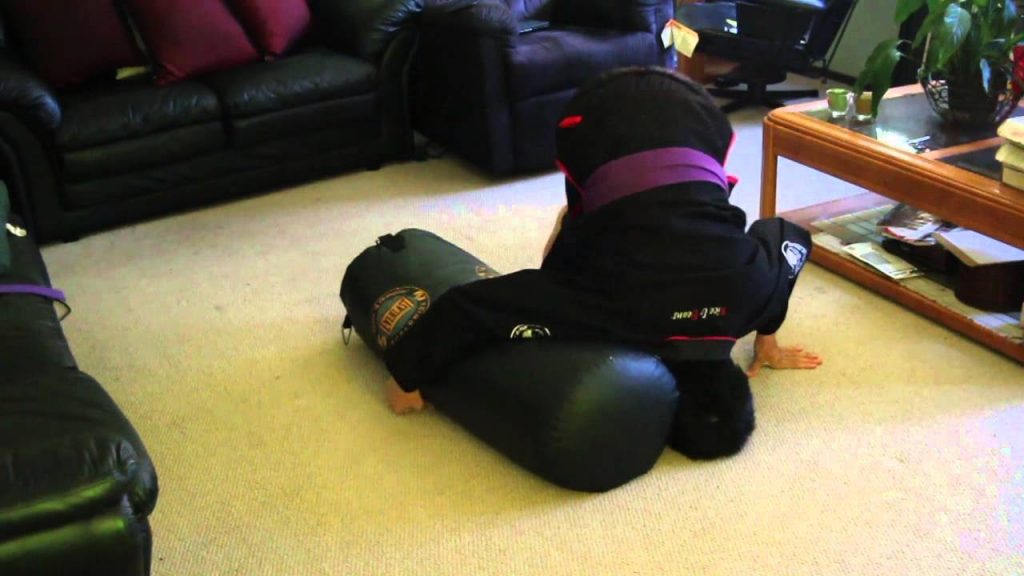 Speaking of home gear, remember when you were going to get ready to fight MMA? Well, it is about time you dust off that heavy bag you might have lying around. What can you do with it? Hip thrusts, bridges, penetration step pickups, shouldering the bag from the floor… Depending on the size and weight of the bag, a lot of stuff. If the bag is too heavy to lift, you can always maneuver around it, with guard passing drills, knee on belly switches, positional transitions, etc.

BJJ Home workouts really do have no limit. Particularly when you’re heading in the grappling specific training direction. Things tend to be simple – move. With ger or without it, the trick is to keep moving and do so in specific patterns that will eventually translate well to your BJJ.  This isolation period is also the best time to figure out the kinks you might have in terms of being efficient in your movements. In other words, this is the time to use grappling specific training at home to polish up your fundamental BJJ movement patterns.