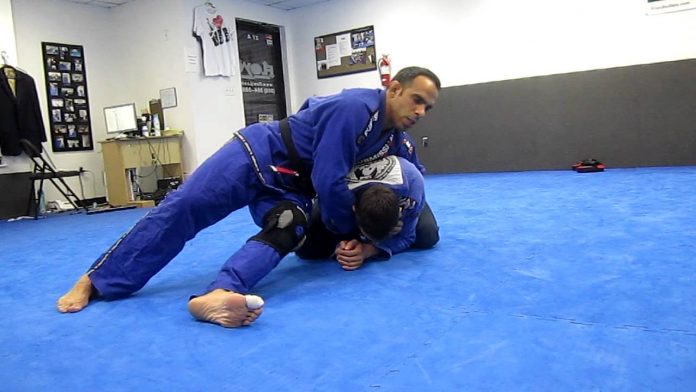 One of the most defensive concepts that a grappler can employ is hurtling up. In a sports context, going into turtle means that you prevent your opponent from both getting points, progressing to a better position or submitting you. If you’ve ever had a Judoka defend all of your attacks just by soundly hurtling up, you know what I mean. Now, depending on rules there are a few foolproof ways to open up the turtle. If leg locks are allowed, going for the feet is going to cause an upset in the structure of the position. When you have to limit yourself due to rules though, it’s best to go for the neck. And, since the neck is buried deep, using the label is the best approach to finishing an opponent. Simple is best here, and it doesn’t get much simpler than a clock choke.

The turtle is a very annoying position to work against. It is one of those Judo positions that is intended to turn you into a rock. And the clock choke is the hammer that breaks the rock. It is one of the simplest, yet least used chokes in BJJ. It is extremely effective, and, as with many things in Jiu-jitsu, offers plenty of variations. Further, in this article, we’ll dissect how the clock choke works and which variations fit which situations. Let’s jump straight into it.

Essentials Of Choking With The Gi: https://bjj-world.com/unorthodox-gi-chokes/

Strangling People With The Clock Choke

As simple as it is, the clock choke is a very detailed BJJ technique. The body positioning is such, that if you don’t get everything spot on, you’re going to create an opening for your opponent. However, when you sink it in tight all you have to do is relax. Really, relaxing the body is essential in closing down all space.

The turtle position is the best spot to hit the clock choke from. Useful, isn’t it?.  The hardest part of a clock choke is getting your grips in. The turtle position is a difficult one to open, but that doesn’t mean that you can’t sneak your arm in.  The first order of business against the turtle is taking away space. This is done by staying very heavy on the back and hips of your opponent. Pressure is crucial in order to look for your grips.

For the clock choke, one arm needs to control the opponent’s far wrist, while your other hand goes on his collar with a thumb-in grip. This collar grip is the crucial one to get. Do not be discouraged if it takes a little while to sink in. As long as you stay heavy, you’ll be fine. Once you have a strong grip on the collar it’s time to break the turtle down. Drive forward, pull your partner’s far arm in and they’ll collapse to the ground. From there, you sit your hips in front of your partner’s shoulder and start walking around the head. Some people are going to tap right there, while for other’s it takes a thug of the collar.

The Occam’s Razor Principle For BJJ

The basic and fundamental BJJ techniques are foundational for a good reason.  They continue to work well on a constant basis and across multiple levels. Even after the latest fad and fancy techniques have disappeared, the basics are still going to work. A great rule of thumb for grappling martial arts is to start and end with the basics.

Since there aren’t that many options for attacking a turtled up opponent, the clock choke is one of those basics. It isn’t nearly as popular as it should be probably because of its simplicity.  If you have ever tapped from a clock choke, then you know how brutal this Gi choke truly is. This choke is one straight for your emergency toolbox.

The key to hitting the clock choke is a strong connection to the hips on both sides.  From one side this is done via the control on their far arm. On the near side, it’s your hips that put pressure on your opponent’s.  Once the arm is controlled and you have the collar grip the hip to hip pressure can be released. However, this doesn’t mean that you completely lose connection with your opponent. You just slide your hips forward so that now they control the opponent’s shoulder.  but not for good, instead it is simply replaced with hip to shoulder and head pressure.

You can even go for a roll from there. All it takes is to releasing the hand that controls their far side arm and pull the opponent up and across your body. This is going to open the neck up, bringing you a devastating finish in seconds.

Check Out The Power OF BJJ Chokes: https://bjj-world.com/bjj-purple-belt-attacked-much-bigger-guy/

Distinct Gracie family member Carlson Gracie Jr. has a very simple take on the execution of the clock choke. Carlson Gracie Jr. makes a point to sprawl his hips at the end of the technique. This variation adds some very intense and dominating pressure to help you finish faster.

Many people have had stunning success with this move at the highest stages of Brazilian Jiu-Jitsu competition. From there, certain excellent details have emerged for us to include in our clock choking game. One such detail is moving from the hip to hip pressure to sit on the shoulder with your hips.  you can accentuate this by using what we refer to in BJJ as the fifth limb – your head. IN that sense, you can use your forehead to post so that your hips are lighter and allow for more movement.  It is a great way to maintain pressure while rotating in position to finish.

Jean Jacques showed us how to get a turtled opponent out of their shell and expose theirs for a clock choke. In his modification, Machado simply slides off of the opponent’s back and finishes the strangle.

The similarities between these variations are clear, but it is the individual nuances and tweaks that are important to notice. It is simple really,  the longer you train BJJ, the more important it is to polish your favorite moves. All these variations are great options to add to your existing clock choke game in order to ensure you finish everyone!