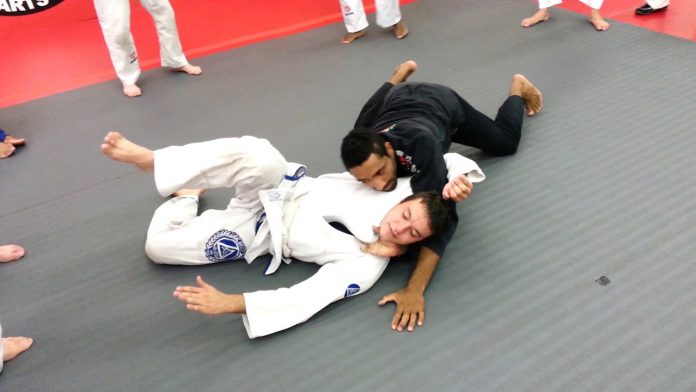 “Position before submission” is the age-old mantra that we hear over and over again. I really dislike that one. I’ll share a few examples as to why later on. The key point is, you can’t really finish someone from a position that scores points. You can only finish from the position the submission configuration leads you to. In other words, that is the position you want to be controlling, rather than looking to stay in a scoring position. That’s why sometimes, rolling BJJ GI chokes work much better than their counterparts from the back or front headlock.

Submitting people in Brazilian Jiu-Jitsu is the hardest part of the sport. It is more fun than anything else, but if you take a look at how many submissions you’ve lost compared to how many ended in taps you’ll see that you’re way behind on your taps. That is because finishing someone is hard, and it just gets harder the closer you get to a submission. BJJ GI chokes make that task a bit easier by employing the Gi as a weapon. Rolling to get them and/or make them tighter only adds fuel to the fire.

The Issue With Positional Jiu-Jitsu

Let’s tat off with my issue with the mantra about the position before submission. Mount is a position. The armbar is a submission. Being in mount is very far from finishing an armbar. In between that position and the submission, there’s the entire sport of Jiu-Jitsu to be played. It is a similar situation with the back and the Rear Naked Choke, or any other choke. And it all boils down to patience. 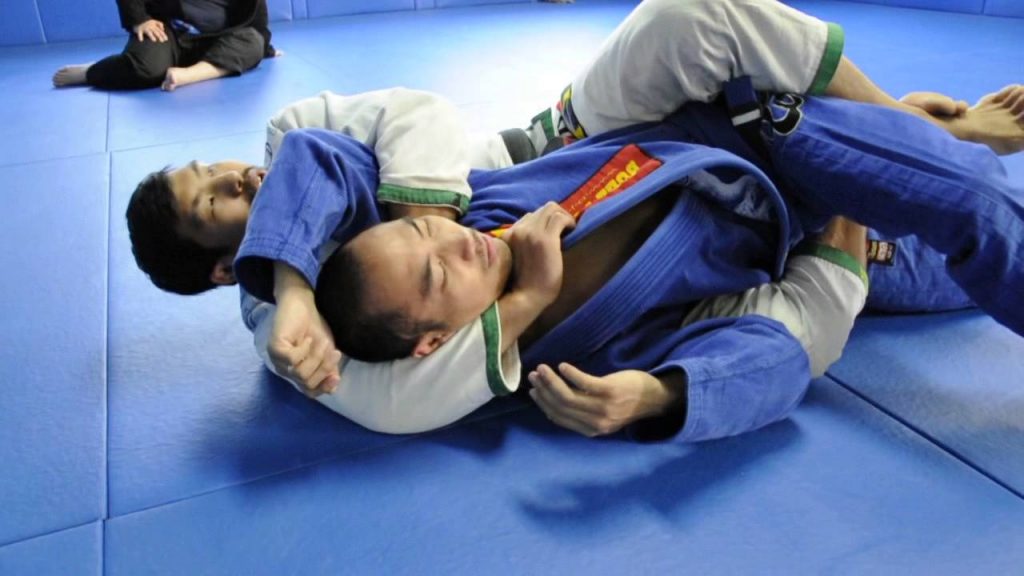 If you can stay patiently in the mount, then you know what control is. The same is true for the back. However, a submission rarely takes place directly from one of those highest scoring positions. Instead, you take that same approach and transfer it to the submission itself. Remember that everyone worth submitting is going to look to escape very late. That man that if you want to choke or armbar someone, you have to be able to stay in the submission itself for a long period of time, fins tuning and adjusting aunt ill you get a tap.

With chokes using Jiu-Jitsu gi, there’s a shortcut to this. Instead of battling for the submission position directly, you take a shortcut by rolling straight into one. The one prerequisite is that you set up a purposeful grip so that when you roll, you end up ready to finish with the slightest pressure, and without a chance for the opponent to defend.

As controversial as it may sound, in BJJ, you want people to move. If they stay put, and you stay put, you’ll probably both get penalized at a tournament. Plus, there’s no fun in it. If it was wrestling, judo, or even Sambo, you might want to hold a person down for the pin, and points. However, in BJJ three’s no point in staying static. In fact, it offers no control, but rather just the restriction of movement.

Whenever someone moves in BJJ, and you’re the one in a position of control,, that movement opens up even more control for you. Simply look to limit their movements in a specific direction by using superior mechanics. From there on, patience will cause the person to be attacked to try and move. All of their movement is actually something that is providing you with more control. And that is exactly what you want when you’re trying to submit someone – control.

The rolling portion on rolling BJJ Gi Chokes is actually a means of control. It servers to get you in a spot where you maximum control and /or remove slack from the submission you otherwise wouldn’t be able to get easily. That, and there’s a psychological moment where the opponent is clueless to what is happening around them. That is also a type of control.

There are plenty of BJJ Gi Chokes, and some of them are set up by rolling. The rolling part is fun, can look scary, and will take time to get used to it. However, it will take you from a position of battle to a position of superiority. Moreover, rolling makes the BJJ Gi chokes tighter, easier to control, and much better looking. There are countless ways to grip a Gi for a choke, as well as countless directions for rolling. Below we’ll just take a look at several of those chokes that are pretty fun to go for.

The Rodado choke is set up from standing, and in particular, off of a sprawl that counters a double leg takedown attempt. The goal is easy – get a grip on the GI with an arm heading under the armpit. Think of a D’arce choke, but with the palm in the lapel. From there, you need to grab the back of the collar, four fingers in, and roll to the side. You’ll pull the partner with you, ending up on top with a very deeply sunk in baseball bat-like choke.

This one is probably the quintessential rolling choke. As far as BJJ Gi chokes go, this one is a version of a loop choke, just done from a very weird position. You set it up from passing, going for the usual loop choke grip. Once you have it, instead of looking to loop the other arm in, simply roll over the free side shoulder, and look to get a grip on the pant in the process. You end up in weird side control but with your back to the opponent and a very tight Gi choke on.

When BJJ Gi chokes fail, you go for rolling collar chokes. When those fail too, you go for rolling lapel chokes. You start this one in side control, feeding the lapel of your own Gi over the neck of the opponent. Use the lapel that’s nearer to the head. Once you have it, you need to head towards North-South, but roll forward in the direction of the opponent’s legs the moment you get into position. Horribly deep and quite painful.

My favorite rolling Gi choke is the one you do against a turtled-up opponent. The turtle can be extremely difficult to break down and you need sneaky stuff to break the defenses. For this choke, in particular, all you need is a grip on the collar, like for a back choke. However, you need to get it on a turtled-up opponent while controlling them from the side. That’s where the fun begins.

Contrary to popular belief, you need to completely pull away from the opponent, bar that collar grip. This will allow you to swing a leg over, trap the far arm with your am and roll. One of the best-looking BJJ Gi chokes ever, along with one of the most attractive setups you’ll ever learn. Not to mention how tight this one is.

BJJ Gi chokes work. They work even better when you set them up using rolling setups. As long as you can change the way you think about BJJ control, rolling to get submissions will not be scary. In fact, it will start o seem logical and very straightforward. Focus on the finishing position as the one you need to control, and use all means at your disposal of getting there, or making it tighter. Rolling is just one.