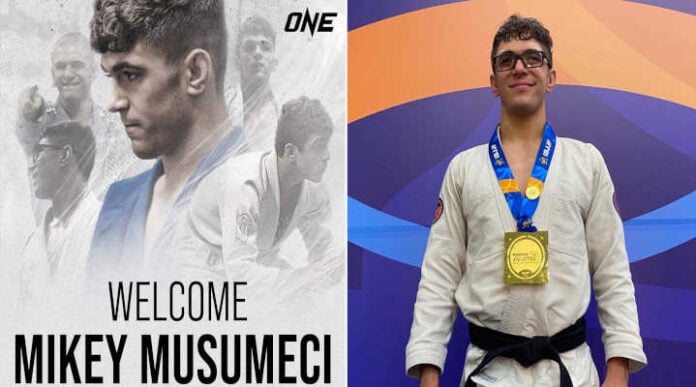 It seems that ONE wants to create a strong, if not the strongest Grappling scene in the world and so greatly monetize Jiu-Jitsu fighters as MMA promotions do. Just a day after Danielle Kelly arrived at ONE, Mikey Musumeci joins her.NOw they’re in the company other grapplers like Gordon Ryan, Andre Galvao, etc.

“Please join me in welcoming 5x Brazilian Jiu-Jitsu World Champion Mikey Musumeci to ONE! He reached out directly to me a year ago, asking if he could join the world’s largest stage of martial arts. Needless to say, I have been a big fan for a while. What I love most about Mikey is that he is a good guy with a good heart, but he is an absolute monster with killer instincts when he competes.”

Mikey is one of the most decorated American grapplers in history, with a slew of accolades to his name. He has earned the nickname “Darth Rigatoni,” which is one of the greatest sports nicknames ever.

At the age of 18, Mikey received his Black Belt from UFC veteran Gilbert Burns. The legendary Art of Jiu-Jitsu was where he trained and traveled frequently with the Mendes Brothers. He traveled to the west to train with Caio Terra, a legend in the art of jiu-jitsu.

Mikey has recently enrolled in Heath Pedigos Daisy’s Fresh Pedigo Submission Fighting in Mount Vernon, Illinois. And while training in his garage during the previous pandemic, Mikey created his own heel hook submission known as the Mikey Lock (at least he thinks he created it). This past October, at Flograppling’s Who’s Number One, he even demonstrated it

Musumeci is relatively new to No-Gi Jiu-Jitsu, having competed almost exclusively in the gi for the last ten years. He has less than 20 No-Gi fights over the next two years. His greatest challenge remains ahead of him as he has been invited to compete at ADCC 2018, which will take place in September in the heavily stacked 66

Keep an eye out for Mikey Musumeci’s name in the near future at the highest level of No-Gi grappling!