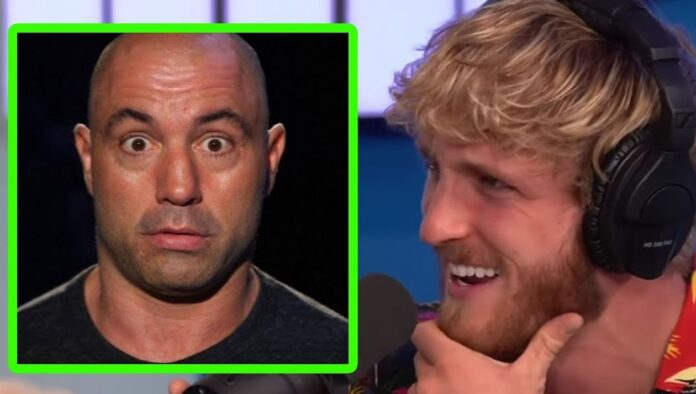 The Famous YouTuber, media personality, and WWE star Logan Paul claimed in a recent appearance on the TigerBelly podcast that he would  easily defeat 55-year old Taekwondo  and BJJ black belt Joe Rogan, saying : “I would fu** Joe Roan up.”

Logan Paul, the WWE star who has been trying his hand at combat sports as a pro, has now decided to start talking sh*t about Joe Rogan. During his appearance on the TigerBelly Podcast, hosted by Bobby Lee and Khalyla Kuhn he was discussing how he would fare against MMA prfofsssioals inside the cage.

Some interesting names came up, and to be honest, Logan Paul did do him self a favor by taking himself out of the running against fighters like Khabib Nurmagomedov and Kamaru Usman.

When asked about Dustin Porier, he was somewhat undecided, stating that:

It appears that the 27-year-old has a thing for Joe Rogan, but it most likely all comes down to angling to get on the Joe Rogan Experience podcast, an invitation Paul is yet to receive.

In a previous appearance on The Flagrant podcast, hosted by Andrew Shultz, Logan Paul expressed a clear desire to be on Rogan’s podcast, but said he’d be patient:

“It’s no rush. I’ll give him a f**king good a*s reason to have me on proper one day. If he doesn’t feel it’s right yet, it’s not. No rush, I’ll be around. I got some big things coming. I need something, I’m lulling right now, I’m stagnant.”

With Joe being particularly picky about his guests, we don’t really like Paul’s chances here.

Speaking of chances, we don’t like his fighting chances against Rogan either, despite the huge age difference. Rogan is in fantastic shape, was the national Taekwondo champion, and is a legit BJJ black belt with years of experience under Eddie Bravo and Jean Jacques Machado.

Logan Paul, on the other hand, outside of pr-wrestling in the WWE has no real combat sports experience, apart from a boxing match he had with Floyd Mayweather, which he lost, of course, but proved tenacity by taking it the distance.