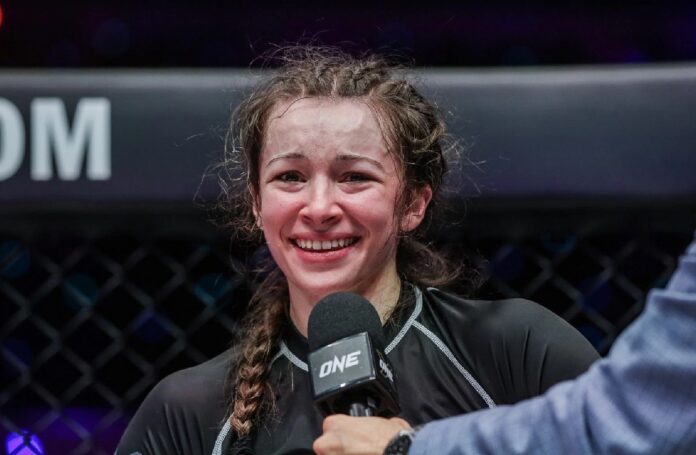 Danielle Kelly is arguably the most popular female grappler at the moment, after helping BJJ to a 3-0 record against Smab in ONE submission grappling. As a result of her huge win and dominant performance she has been getting a lot of media attention and on one occasion, she shared that she almost quit BJJ a few years ago after her father passed away.

Woman of the moment Danielle Kelly looks like she was born for Jiu-Jitsu. She lives the lifestyle, enjoys the daily grind, makes most of her day about it, teaches constantly, and is undefeated in professional submission grappling bouts under the ONE banner. A few years ago, however, Kelly actually came very close to quit BJJ altogether.

In an interview with ONE Championship, Danielle shared a private story about how the passing of her father affected her so much that she almost quit BJJ in the aftermath of the grief, since he was her main motivation when she competed:

“There definitely was a time, I think I was barely 21. And, you know, at such a young age, even before then, I had like sick parents, my dad was very sick. So he was the main reason, he’s my motivation. He’s the one who brought me into the sport. Even before I did Jiu-Jitsu, like I did, like some karate before. But like, he’s the sole reason, he wanted me to get involved and stay busy with Jiu-Jitsu.”

Understandably Kelly came close to quit BJJ after her father passed just as she graduated high school and was looking to get into college, which is a difficult time in one’s life anyway:

“So after he passed, you know, I was kind of with my mom at the time and I was graduating from high school. I was a new graduate and I was trying to get into college. And you know, I lose my mom and it kind of like, all fell down to like, what am I going to do with my life kind of talk. And, yeah, I was pretty lost at a young age. So I felt like Jiu-Jitsuat that time was kind of holding me back in a way. I couldn’t put the focus I wanted to put on Jiu-Jitsu. So I took almost a year off and looking back, I wish I didn’t, because I feel like I probably would have accomplished more.”

Luckily, Danielle got back to BJJ after the gap year and now, she is tearing it up in ONE, with a probable shot at a submission grappling title and perhaps a super fight with Angela Lee on the horizon.