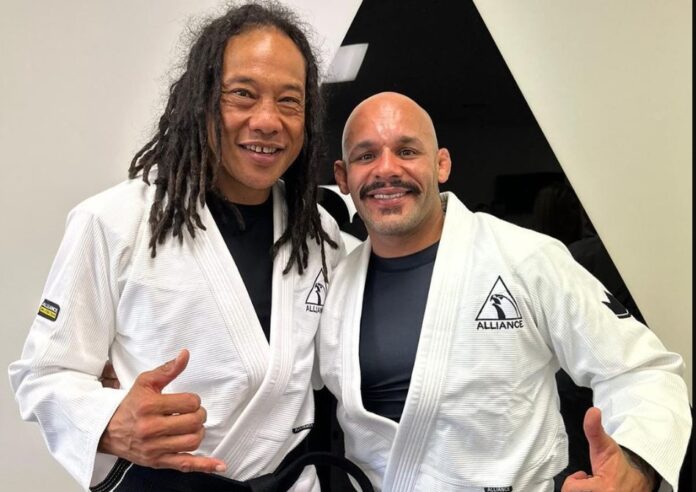 Tana Umaga, the captain of new Zealand’s national Rugby team “The All Blacks” received his BJJ black belt after 13 years of dedicated training, managing to fulfill one of the goals he set for himself more than a decade ago.

Tana Umaga (49) promised himself that he would do anything he could to become a BJJ black belt before he turned 50. This was 13 years ago, and two days ago, on December 5, 2022, Tana Umaga shared on his Instagram account that he finally achieved this goal.

He also thanked a bunch of people in a lengthy heartfelt post, disclosing that when he reached the purple belt he even reconsidered if he wanted to ever become a black belt, given how much he did not know.

Tana Umaga was the captain of New Zealand’s national rugby team “The All Blacks” from 20014 until 2011, leading his nation’s best rugby players on the field in one of the hardest contact sports outside of combat sports in the world.

Grappling was obviously also a big part of tana Umaga’s life, who has competed as a brown belt before, winning a silver medal in the Masters 4 Super heavyweight division.

“Wow, so humbled to achieve a goal that at times I didn’t think I would ever reach. A goal that has been in my mind since starting the art 13 years ago.

From my first class that @hoppa500 took me to at @bjjnz and meeting Geoff Grant – to walking into @toulonjjb and professor Julien Gaillard submitting me about 10 times in my first class. The thrill that first sucked me in has kept me hooked on the art ever since!

There are so many other people that I need to acknowledge:

Firstly, shout out to Michael Fooks @Ground Control BJJ & MMA and Andrew Craven, the first coaches & club I attended when I came back to NZ from France. Special mention to @johnwillbjj who awarded me my blue belt…I ended up taking a two-year break the very next day! Thank you to Andrew Craven of Zero-Gravity BJJ for chasing me up and encouraging me to get back into it once we moved into the city. Pedro Pacheco Fernandes of @tukahabjjnz who allowed me to train and then finding my home at @sorrisobjj.

So thankful to Paulo @sorrisonz and the environment he’s created along with our senior members. It’s awesome. To my club-mates for pushing and assisting me as well as our new direction with @alliancejjaklme and the unbelievable knowledge of @johnnysd . So amazing to be a part of this new big Alliance family. @alliancesandiego.

Thank you to my family who’ve put up with me practicing on them!!

A long journey to get here and a goal I set myself as a white belt to achieve before I was 50 years old. When I became a purple belt I didn’t want to become a black belt because you realise how much you don’t know! Now I’ve achieved this milestone, I know how much I still have to learn and I look forward to continuing my learning journey. In a way, it feels like I’ve just begun. Love it!!

Shout out to the 5:45AM crew who make getting up that early in the morning fun and worth it. Let’s keep it on!?