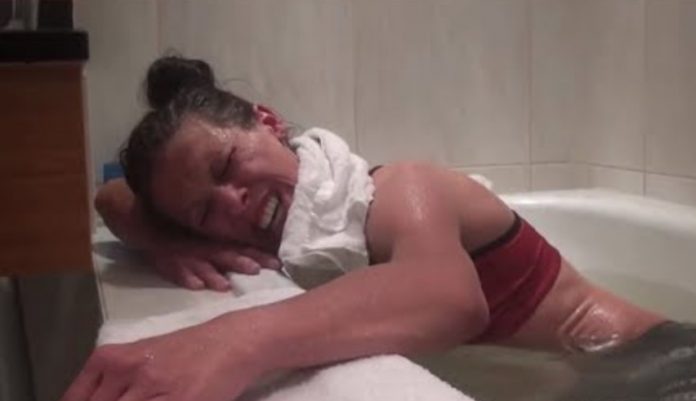 Joanna Jedrzejczyk weight vutting video showed up on various sites. The video contains material of her losing weight for her first title defense in the UFC which she had two years ago.

She was cutting weight for her match against Jessica Penna for their bout in summer of 2015. It was probably her best fight in UFC’s career, but before she had gone through the hell and back, with a short stay in one of the worst circles.

At the beginning, we see Joanna during the teasing, and by that way we listen to her self-admiration, or an attempt to turn her thoughts away from what she feels right now. Even hough she is laying on the floor, she is extremely hyperactive, which is just a proof of how she really feels. She could not hide her face in the other footage where we watch her in the tub and where she was no longer trying to encourage herself. She’s just trying to get through pain and endure the end of the process.

It’s not surprising that this video came out the same day Joanna announced that she had left the team of nutritionists mentioning that she almost died while weight cutting for the fight against Rose Namajunas.

Of course, we can not be sure what’s the real reson or the truth or the search for the reasons for her first defeat in the MMA career. But what is certain is that UFC banned this video to saw the light of the day two and half years ago. But now he has appeared and serves as another example of how much danger process weight cutting really is.

It should be the best for everyone to listen to advice from Joanna ‘s new team: “New video emerges of the drastic lengths Joanna Jędrzejczyk went to making weight in 2015. Back in a days UFC PR staff told us to delete it or else… STOP FIGHTERS MAKING WEIGHT!”