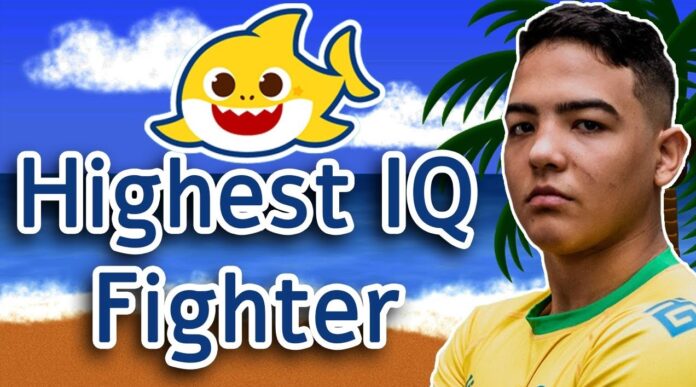 Who would you say is the most intelligent grappler in the world today? It is difficult to figure it out, as grappling intelligence is not the same as the IQ measured on tests, but here’s an interesting video that analyzes one grappler’s ADCC performance naming him the most intelligent in the BJJ world.

Diogo Reis, a.k.a. “Baby Shark” was definitely in the mix for some kind of a medal in the 2022 ADCC, but instead, he took it by storm, cruising past every one of his opponents to become the -66 kg ADCC champion.

Diogo was completely unknown when he signed up for the South American ADCC trials. He won the whole thing, tactically dealing with everyone in this way, including submitting favorite Fabricio Andre, who happens to be Baby Sharks’s teammate and out-wrestling Diego Pato in the finals.

With strength, precision, an abundance of confidence, and eventually, the achievement of being the least scored upon ADCC grappler, Diogo’s display may now earn I’m the title of BJJ’s highest IQ athlete.

Baby Shark first faced Ash Williams, who knew Diogo is better at wrestling and chose to sit down and play guard. Reis obliged, constantly threatening Williams with passes, wearing him out and not allowing him to establish his dangerous leg lock game.

In one of many surprises, but incredibly genius tactical decisions throughout the ADCC that qualify Baby Shark for the highest IQ grappler, he chose to sit down and engage in a leg lock battle just before the point period started.

He turned out to suppress Ash Willimas’ dangerous leg lock game by hunting for toe holds, ankle locks, and heel hooks himself.

As the end of regular time approached, Reis baited Ash to stand up and try to pass, easily controlling the guard and getting up at will to dominate the wrestling. Since Williams couldn’t pull guard without getting negative points, he had to wrestle Baby Shark who easily won those exchanges.

A re-match with teammate Fabricio Andre saw the pair immediately enter leg entanglements. Fabricio was way more aware of Diogo’s leg locks, and was able to defend them, getting up to pass, but couldn’t solve Bay Shark’s guard.

In overtime, Andre got Reis down but did not hold him down, nor managed to establish hooks after getting a rear-naked choke. It got him ahead on decision and this is where Baby Shark’s tactical brilliance came to the rescue.

Reis got a tight body lock, took Fabricio down, didn’t manage to score a takedown, and then decided to let go and disengage. He did the same at the trials, leaving everyone puzzled.

His tactics proved effective once again. He was able to shoot for another takedown, not scoring, but getting ahead in the referee’s scorecards, which eventually scored him a referee’s decision.

Dangerous grappler Josh Cisneros faced Baby Shark in the semi-finals. Reis chose to wrestle, trading a takedown each with Cisneros before the scoring started.

He used JOsh’s takedown right before the points to establish a guard and started playing his leg lock game from there, shutting down Cisneros in the process.

When leg locks did not work, he easily stood up, made Cinseros wrestle, and took him down for the win by points.

Tactically speaking, the young grappler demonstrated great strategy by constantly forcing Josh backward, even though he had the lead. This made it impossible for Cisneros to set up takedowns and saw baby Shark cruise to the finals.

A very competent wrestler in Gabriel Sousa was the final hurdle for Reis. Baby Shark won every wrestling exchange in the opening portion, before point scoring.

When that failed, he once again turned to wrestling, using arm drags to expose Sousa’s back and scoring points for a standing back take, before going back to guard and employing the same tactics as winning the semi-final, constantly attacking to prevent the opponent from scoring.

The burning question is whether it was Baby Shark that is the most genius grappler out there or his coaches and camp for coming up with the tactics. No doubt, Reis is one of the very best grapplers out there, and a match with Mikey Musumeci can’t be far, can it?