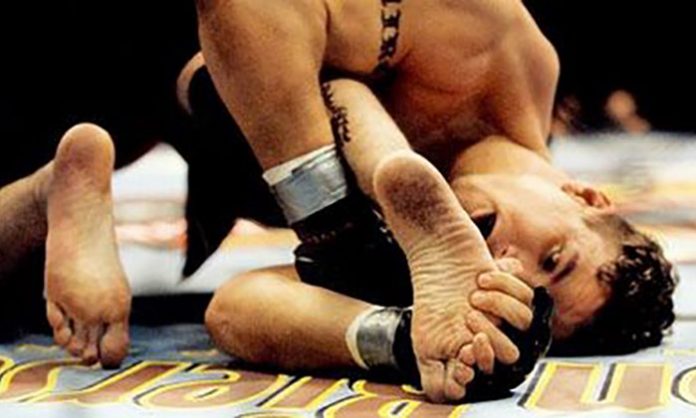 Leg locks are the “great equalizer” of the Jiu-Jitsu game! This is a common reference today and one that’s in many ways true. The burst of leg locks on the scene proved that size can be irrelevant when a person is well versed in the leg lock game. However, using leg locks to level the playing field is not as easy as it sounds. Against bigger and stronger opponents you need to be aggressive and know how to maximize leverage and force. Furthermore, not all leg locks are equally suited for every opponent. In the case of a much bigger and/or more experienced opponent, the kneebar would be a hard submission to get. Of course, the heel hook would be the lock of choice, but it is often considered illegal. Since ankle locks are not nearly as effective, it’s up to the toe hold to perform. And it does so admirably!

In this article, we’re going to dive into the details of a very powerful leg lock. In fact, it is arguably, the most powerful leg lock allowed under the rules of the International Brazilian Jiu-Jitsu Federation. Top competitors of the sport like Caio Tera and Mackenzie Dern have used it to great effect. Actually, both of them being quite small grapplers, they’re an outstanding example that toe holds slay giants. But what makes them so effective? As always, the foot-locking devil is in the details, and that’s exactly where we’re going to look for him today.

The toe hold is a twisting lock that puts the ankle joint under tremendous pressure. It both extends and bends the tarsal joint in a very uncomfortable fashion. As such, it is not anything new or unknown to BJJ. Quite the contrary, it’s a staple of the art that has often been overlooked, despite its obvious effectiveness.

This is a foot lock that’s legal in the Gi at the brown and black belt level at IBJJF tournaments, it’s also legal at most no-gi submission tournaments. The beauty of the toe hold is that it is as easy as other foot locks, but as painful as a heel hook.

The toe hold is technically a twisting style foot lock. It involves grabbing the foot by the ball of the foot and the toes with a thumb-less grip, and using your other arm as a brace against the opponent’s shin, and connecting your arms by another thumb-less grip. The grip is similar to that of a rear naked choke. It can be applied from a variety of leg-locking positions and used as a blitz attack as well.

Mechanically, it’s important to not just be satisfied by locking your hands together. You have to make sure you’ve “loaded” a lot of pressure on the bent foot of your opponent. This way, no muscular strength will be required for a strong finish. Next,  you’ve got to bend the opponent’s big toe towards their same side elbow.

In certain situations, however, the toe hold just won’t work. Whatever you do, you don’t seem to be able to get that one resilient opponent. Read on to learn the secret details that make the toe hold such a formidable submission!

When looking to bend the foot for a toe hold it is important to make sure you utilize every little trick to your advantage. As such, it is very important to grip the foot properly. In order to do this, you could go with both a monkey grip or a C-grip. The C-grip is more of a personal preference of mine since it allows for a crushing motion to be added to the hold.

From there, here’s the first dirty little trick: look to put the figure 4 grip as high as possible. This means, that instead of a Kimura-like grip, you look to place your hand higher on your wrist. Actually, you need to look for to reach the fingers of your other hand. The pressure is going to be immense.

To cap it off, look to apply a double twisting motion. You already know that the toe hold needs to bend towards the opponent’s elbow on the other side. Well, before bending the toes back use a shrugging motion to cause an outward extension of the joint. It’ll result in the lock coming on much quicker. make a cucumber out of their foot, and you’ll know you’re on the right track to a tap or snap.

Many people try to do what’s known as the shot-put method. When finishing the toe hold, where they look to push the leg away from them. The idea is that the closer it is towards your opponent, the easier it is to tap them. Well, just take a look at a Caio Tera match and you’ll notice that he doesn’t seem to agree. Tera looks to extend the leg as far from the opponent’s butt whenever he can. However, he uses a sneaky little trick that helps him achieve better mechanics that way.

Namely,, if you analyze what toe hold experts like Terra and the Mendes brothers do, you’ll notice that during the setup and the finish, they keep the attacked leg very tight. The make a point out of keeping the opponent’s foot and ankle glued to their chest. Only then they look to rotate to the side. That way, the whole torso is behind the lock, ensuring immense pressure to get the tap. It is much more effective and easy than pushing the leg away, creating space for your opponent to defend.

It’s been traditionally taught that in order to force the toe hold tap, you’ve got to bend the opponent’s big toe towards their butt. In fact, you should be bending his big toe towards his same side elbow. We’ve already covered this. What we didn’t look at is why this detail is important and how it improves the toe hold.

What this does is it gives you an increased range of motion.  This range of motion also places the knee joint under pressure. It is right in line with Danaher’s principles of controlling every joint in the leg when attacking it. Because you’re bending the foot out and over the opponent’s own knee joint instead of just towards it, you get a double trouble situation. When it comes to finishing this attack on someone bigger and stronger, you’ll definitely want to ensure that you’re loading as much pressure on as many joints as possible. This also prevents a really strong opponent from defending via a leg extension motion.