The BJJ knee on belly position is one of those spots that most grapplers try and stay out of at all costs. It is painful to be in, causes you to give up things in order to avoid that pain, and is overall one of the most difficult things to endure in BJJ. Unless you’re on the giving side of it all. There are people in the sport that are extremely efficient at causing mayhem from the knee on belly position. In that sense, there are a few different ways of holding the position, in terms of what you want to accomplish from it.

To be honest, I might go as far as saying that knee on belly is the most difficult position to master in Brazilian Jiu-Jitsu. It is one of those positions that require balance and subtle shifts in weight and occasional bracing that no coach can teach you. If you’re on a quest to become a menace with the BJJ knee on belly, then don’t expect to learn it like you would an armbar or a guard pass. Instead, gather all the knowledge you can but focus on spending lots of time trying to figure out your sweet spot” Only when you have the delicate balance of this position down, you can think about expanding towards attacks or unbearable pressure.

The BJJ Knee On Belly Position

The BJJ Knee on belly position is a checkpoint between side control and mount. It is a position that will bring you two points in a competition if you can stay there for longer than three seconds. It is also a position that allows you to do significant damage to an opponent, in terms of landing strikes while being safe yourself. In sports BJJ, it is one of the staple positions we use to transition in between other dominant top pins while keeping an opponent under pressure.

In fact, there are three main uses of the BJJ knee on belly position, and two ways of setting it up and working with it. The eon thing all three have in common is control. Despite the position seeming unstable, it offers a great amount of control and plenty of attacking options. The first one is transitioning into other positions, which range between switching sides to stay in the knee belly and getting mount or back, depending on which side the opponents start to turn. A second option is exerting inhumane pressure on their torso, causing a chest compression that might lead them to s#*t themselves. Finally, the third option which is always present is going for a direct submission attack from the BJJ knee on belly.

There are plenty of nuances when it comes to holding knee on belly, but a couple of things that I’d like to point out as hugely important are head position and grips. In terms of head position, regardless of the knee on belly variation, you’re using (more on them later) your head needs to be aligned with the near side shoulder of the opponent. This really makes all the difference in the world when it comes to stability and maintaining the position. Also in terms of maintenance, try not to grip anything. Any grips you go for will only allow your opponent to move you around more easily. Instead, look to maintain a good posture and only use your arms to post shortly, and let go as soon as possible. 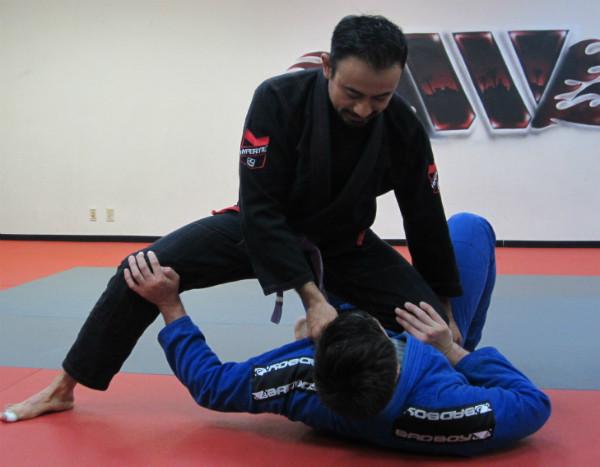 One of the main uses of the BJJ knee on belly position is to hold someone in place while you set up transitions to other dominant pins. For example, you might be looking to go into the mount. Staying in the knee on belly will not only get you points but it will also tire out an opponent before you head to the next dominant top position. One thing to always keep open when you’re using knee on belly to transition is switching side to side. If things are not exactly working out in terms of going to mount, go to the other side, re-establish knee on belly, and create a better opportunity to go to mount or take the back.

Setting up the BJJ knee on belly control for transitioning is based on several mechanical details. First of all, you need to have your shin running across the lower part of the belly, just above the belt. Next, you want your foot to be off the ground, meaning you need to be looking to hook your foot on the hip and have the knee point straight to the other hip. Your butt also makes all the difference here, as it needs to be on your heel to offer you the best balance and movement opportunities when you decide to transition. The other aspects (no grips and head alignment) stay the same. As for the far leg that serves as a post and power source, that’s something that everyone has to work out for themselves.

The BJJ Knee On Belly From Hell

If you want to cause people all kinds of trouble in terms of pressure and discomfort, instead of looking to go through the pins of Jiu-Jitsu, then you’ll need to make a few BJJ knee on belly adjustments. Mainly they have to do with the placement of the knee and the positioning of your hips, but head alignment, grips, and the far leg stay the same as before. 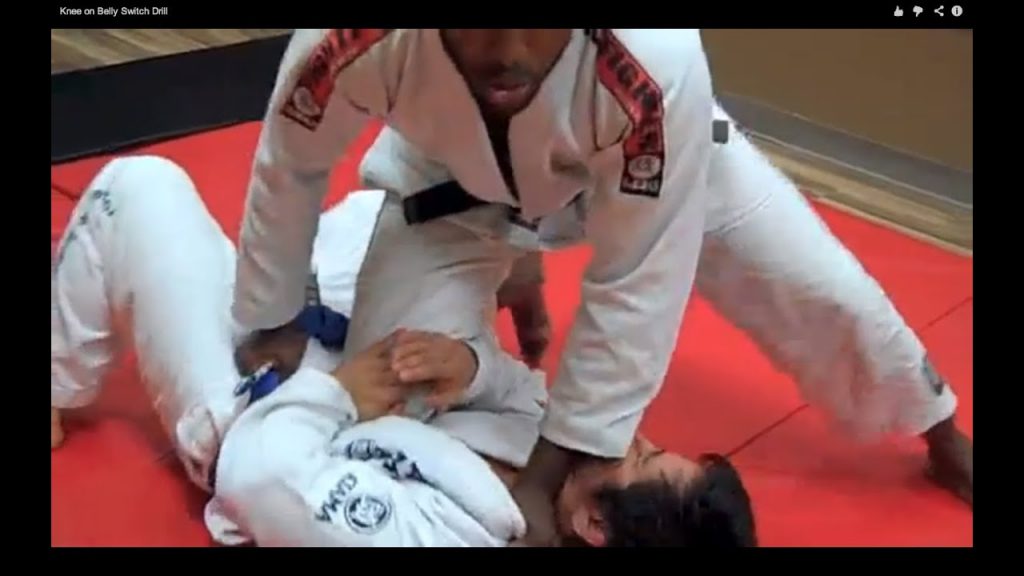 Namely, if you want to cause people massive amounts of pain, your knee needs to point to the middle of their chest instead of going across their belly. The goal here is to point the knee towards the sternum and place it right below the bone. The goal is to pressure the diaphragm so that breathing becomes labored and difficult,. In other words, it is a form of chest compression. Here’s the key difference compared to the previous variation – you need to lift your butt up. After placing the knee below the sternum, you need to lift your butt off the heel. How high? As far as possible while keeping the knee in place. This will put a lot more pressure on the diaphragm and cause even more pain.

But, there’s more. The final nail in the BJJ knee on belly coffin is lifting your heel towards your butt. That is the part that will make people exert all kinds of painful sounds and even get you a tap or two.

In both cases of the BJJ knee on belly position (holding for transitions or looking to exert maximum pressure) you can easily go into submissions based on the opponent’s reactions. Armbars, leg locks, chokes, and everything else you can think of becomes readily available. In fact, people will literally give submissions away just to escape the discomfort of the position which is exactly why you need to have it in your grappling arsenal.