Training Brazilian Jiu-Jitsu with the Gi is unlike training any other grappling martial art. Even in Judo, where the Gi is also a mainstay, there are far fewer opportunities than in Jiu-Jitsu. The various uses of the Jiu-Jitsu Gi certainly outline the creative character of the Gentle art and those training it. From innovative grip sequences to lapel-mediated armlocks and collar chokes, the Gi is an essential tool of the modern grappler. Even those that favor No-gi should cross-train with the Gi, at least occasionally. How else would they discover the hidden power of brutal Gi chokes like the Baseball choke?

The Baseball choke is one of those chokes that either agrees with you from the beginning or they do not. Personally, I like it, but I do not execute it from every position. That doesn’t mean that it is not a viable option, it is just not my first one. From the knee on belly, however, it is right there and there are not a great number of things I’d go for before going for a Baseball choke. IT is tight, it can be set up without the opponent noticing and comes on very quickly. It also gets you ina perfect position (North-South) to keep attacking, in the unlikely case it fails to work. All in all, it is one of those submissions everyone needs in their toolbox, just in case they need it.

Attacking From The North-South Position: https://bjj-world.com/bjj-north-south-position-attacks/

How Does The Baseball Choke Work?

The Baseball choke is the brainchild of Magid Hage, a Gracie Barra black belt. The young Brazilian is a huge fan of the sneaky aspect of Jiu-Jitsu, hence his experimentation in those areas. Magid’s “sneaky” research gave birth to one of the tightest chokes in Brazilian Jiu-Jitsu.

The reason the baseball choke is considered to be a sneaky technique is that most people never see it coming. When you position yourself for an armbar from the mount or go for Ashi Garami, people are going to know what to expect. However, when you’re crushing them from the knee on belly position, they won’t suspect you going for the arguably tightest collar choke. What’s more impressive is that you can hit the choke from the bottom, and not just form the guard. The baseball choke is very easy to set up from bottom side control when your opponents really feel safe and in control. That’s not all, however. For all you No-Gi die-hards out there, a variation of the Baseball choke is also applicable without the kimono.

Basically, the Baseball choke is a blood choke, using the collar and your forearms to cut off the blood supply to the brain. The configuration of the choke involves one of your arms gripping the lapel of an opponent very deep. Unlike most Jiu-Jitsu chokes from the front, the Baseball choke doesn’t require a cross collar grip, but rather a same side one. For the grip, four fingers go inside while the thumb goes to the outside. the other grip is placed on the opposite side lapel in an opposite manner (thumb in, four fingers out). The palms of both hands should meet behind the neck, like when holding a baseball bat, hence the name of the choke.

Form the top position the Baseball choke can be set up from two positions. One is the top half guard and the other is knee on belly. The reason why it cannot be sneaked in from classic side control is that it requires space between your body and the torso of your opponent in order to obtain the grips. For that purpose, nothing works better than knee on belly. In terms of setting it up from the half guard, the setup is pretty much the same as from knee on belly. In order to finish, though, you’ll have to pass the guard and rotate towards the North-South position. This is why half guard setups are secondary to knee on belly setups.

Finishing the choke requires you to rotate with your arms as a pivot point. The baseball position of your arms ensures that when you reach the North-South position, the choke is instantly going to be in place. As you rotate, the baseball choke gets tighter and tighter, and in case you need a bit more leverage, once you get to North-South, you can shift your body weight forward towards your opponent’s chest, bending your elbows.

From knee on belly, you need to start by inserting your near side arm into the opponent’s lapel. Be patient and look for a deep grip, the goal being to reach the collar at the back of their neck. once you have that grip in place you can start looking for the second one. It is important to use the first grip both as control and to help you open up space for the second one. Pressure from your knee on their belly/chest is crucial for creating space while keeping the opponent in discomfort.

Sneaky Choke From The Bottom

Now, from the bottom setting up the Baseball choke is the definition of sneaky attacks. This is the most readily available submission from the bottom side control. Which grip goes first depends on the situation you find yourself in. In most cases, it is the grip that goes in second from the top, that is first in order here. It is way easier to establish the thumb in grip with your far side arm.afterwardd the main fight is to sneak the other grip in. Since this is done with the nearside arm, it is not very difficult to do so.

Finishing the baseball choke from the bottom requires a bit of positioning from yourself. once you have the grips in, you do what you’ve been taught never to do from bottom side control – turn away from your opponent. In the case of having Baseball choke grips in, though, the result is going to be a lightning-quick choke. Your opponent can either tap, nap or try and go forward, which is going to bring you in top position where you can still finish the choke.

Alternatively, you can set the choke up from the bottom of half guard. Many opponents are going to allow you to establish the grips without worrying too much. The only trick is that you can’t finish it from half guard. So, you’ll have to let them pass your guard before turning away and instantly making them regret it.

For the No-Gi version of the Baseball choke, the main difference is in the grips. Given the absence of collars, the grip modification includes putting your hands together. The basic idea is simple – connect your hands with an S-rip behind the opponent’s neck. Afterward, the goal is making your elbows cross each other, or at least touch them together. The arms are set up in the same manner as with the Gi, with the first arm being the one that is palm up in the S-grip. The No-Gi Baseball choke is way more effective when done from the bottom.

Make sure you check out the Chokehold Mastery Instructional by Jeff Patterson DVD. Jeff Patterson was training with Rigan Machado and Pedro Sauer. He gathered all of their best chokes and put them on his DVD. 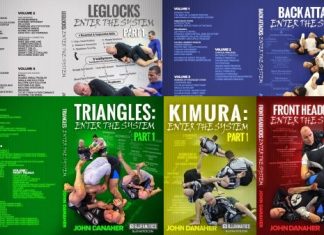 0
Now that there are four John Danaher masterpiece instructionals out, it is time to start organizing them. Albeit few, they area part of a...