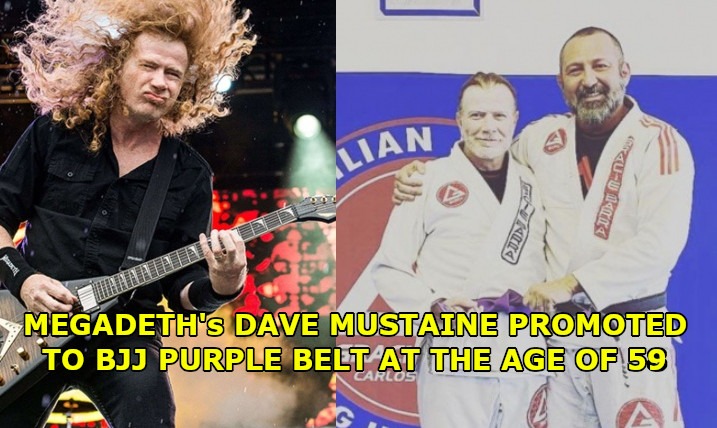 You can read more about his life path, cancer, and other things below the video of Dave Mustaine’s belt promotion.

Dave Mustaine was born on September 13, 1961, in the city of La Mesa, California, to a mother, Emily (a German Jew), and a father, John (of French, Canadian, Irish, and Finnish descent). He was raised as a Jehovah’s Witness.

At the age of 17, he rented his own apartment and survived by selling drugs. Then Lars Ulrich, the drummer of the band Metallica, published an ad in the newspaper in which he was looking for a lead guitarist. Mustaine responded to that ad and soon became a Metallica guitarist. In 1983, he was rudely expelled from the band due to alcohol problems.

Yet before his release he wrote several songs for the album Kill ‘Em All, the most famous of which is “Four Horsemen”, whose lyrics were later changed by James Hetfield and Lars Ulrich. Mustaine released there, as well as some of his other songs, on his debut album Killing Is My Business … And Business Is Good! with original verses. The song was titled “Mechanix”. In 2002, Mustaine stopped playing guitar due to a hand injury, but returned in 2004. During his recovery he became a Christian, and he also studied the music industry, mostly production.

In June 2019, Mustaine was diagnosed with throat cancer. He stated that the treatment had already begun and that he was therefore forced to cancel most of Megadeth’s next concerts by the end of the year. He added that the group is still working on a new album.