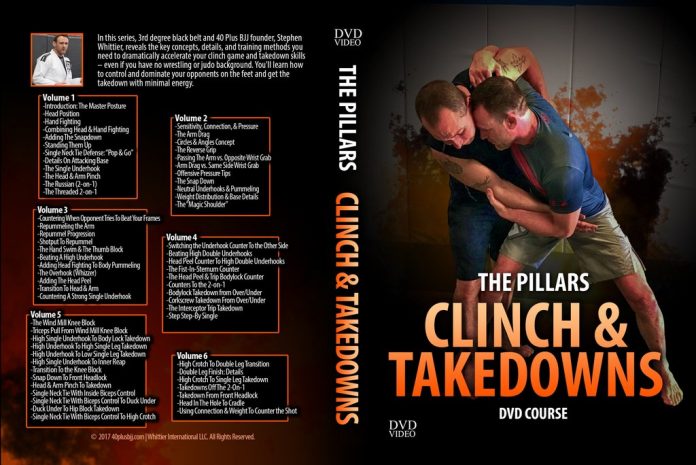 The usual impression of high-level Brazilian JIu-Jitsu is that of concepts and principles that meet techniques in order to make movement fluid and seamless, yet brutally effective. In wrestling, it is mostly explosiveness and raw strength that meet technique in order to slam people to the ground. What if I told you that there’ is a way to use BJJ methodology and apply it to key wrestling takedowns? Check out the following “Pillars Clinch And Takedowns” Stephen Whittier DVD Review to see how one of the best in the business does it.

Learning BJJ ina conceptual fashion is gaining in popularity nowadays. It is a great approach if you ask me, to help you organize the massive amount of information that Jiu-Jitsu has to offer. That said, concepts and strategies won’t really get you far on their own. This is particularly true when it comes to aspects of BJJ that are not as fine-tuned as ground fighting. When it comes to takedowns, most of the highest percentage moves are adaptations from wrestling. SBG standout coach Whittier supplies us with the ultimate BJJ “Pillars Clinch And Takedowns “ instructional and we supply you with a detailed Stephen Whittier DVD review.

Stephen Whittier is one of those coaches that live a rather unassuming grappling life. Those who know him literally worship him and his teaching methodologies. However, he is far from the public eye, unlike some of the mainstream coaches of today. Still, when you take into account his background and affiliation, this makes a lot of sense. 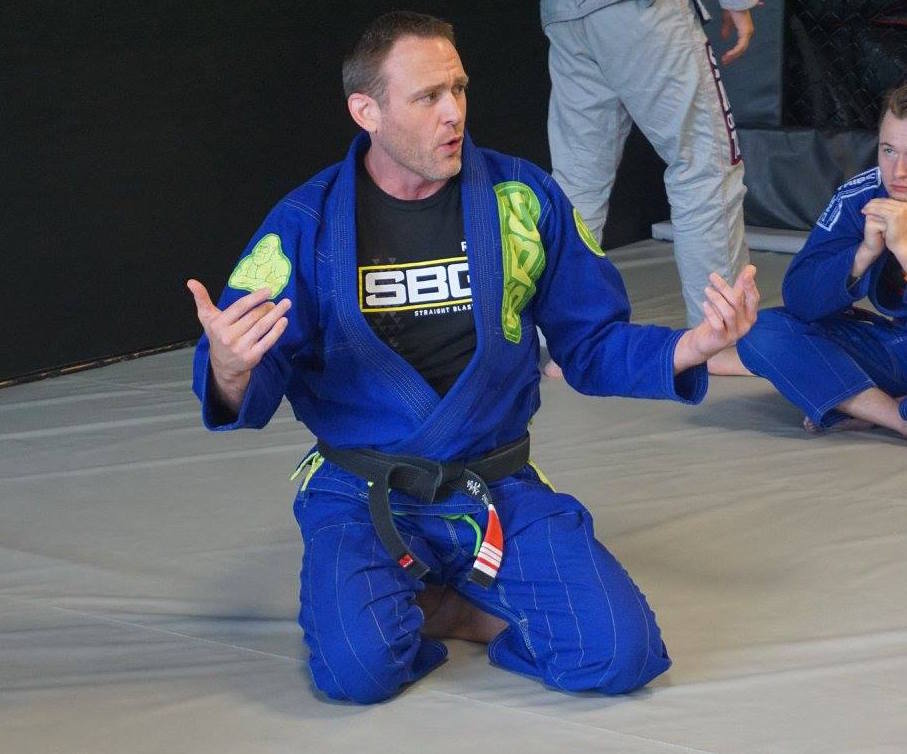 Stephen Whittier is a part of the famous SBG gym (Straight Blast Gym) in Portland. SBG is a worldwide gym, with more than 35 affiliate gyms around the world. The founder of the gym is Matt Thornton, a Chirs Haueter black belt and one of the best grappling teachers alive. His Rickson Gracie lineage means he has a very distinct style of JIu-JItsu, one that he shares with Whittier. Stephen Whittier is a third-degree black is a second-ranking coach in the SBG gym, with only Thornton having a 4th-degree black belt.

Whittier is a perfect match fo SBG, he shares their love for the conceptual side of things. He is also a well versed martial artist, as most of the coaches there are. That means the likes to innovate and integrate aspects of different arts int his grappling style. This is very apparent in any of his DVDs so far, but none more than in the “Pillars Of Clinch and takedowns”. As you’ll see from our Stephen Whittier DVD review, he has found the perfect approach to integrating BJJ and wrestling in a highly efficient system.

In previous Stephen Whittier DVDs, we’ve seen him cover a bunch of BJJ specific subjects. However, we haven’t;’ seen an instructional quite like the ‘Pillars Clinch And Takedowns” form anyone so far, including Stephen. That said, this instructional is something many grapplers have been looking for. I had to take the long route and go through countless hours of Judo and wrestling DVDs to discover my own takedown system for BJJ. If only this DVD had been around, my job would’ve been immensely easier. Still, I learned a lot from the Stephen Whittier DVD review, and I’m not about to stop there.

This DVD set has 6 volumes, which is more than your usual 4-part BJJ instructional of today. AS you’d expect from an SBG guy, the organization is pristine. In fact, you won’t hit a takedown until you reach DVD number three of the set. However, in the meantime, you’ll become a master of positioning in the clinch. That means winning every grip fighting scenario and being virtually impossible to be thrown by others. The third an fourth volume covers some integral clinch fighting techniques that inevitably lead to takedowns. SOm of the most basic takedowns also makes an appearance here. The final two DVDs cover the highest percentage takedowns you can set up using the information from previous volumes. All in all, it is a complete step-by-step system that will never fail you. Plus, you get over 6 hours of high-quality material by one of the best in the business.

Let’s move on to the chapter-by-chapter Stephen Whittier DVD Review of The Pillars Clinch And takedowns” instructional.

Apart from the mandatory introduction, Whitter kicks things off with a portion on some of the position basics in regard to stand up grappling. Head and head position get a lot of attention here, both individually and as a system. The snap-down is as expected, one of the initial entry points to any clinch position.

From there on, Whittier touches upon the basics of clinching and how to remain in the clinch. He uses the necktie as a connection point and goes further into dissecting concepts like base and conenctio.n. In terms of attacks, he offers routes to the single underhook, Russian 2 on 1 and head and arm pinch, which are all clinch variations.

DVD 2 – Setting Up The Clinch

Part two of this Stephen Whittier DVD review covers the chapters on establishing an attacking game from any of the previous clinch positions. This means creating and using opening which will eventually lead to setting up takedowns. To that extent, the concepts of sensitivity, connection, and pressure, which are staples of the SBG philosophy are in the opening chapters.

As the instructional head to a more technical direction, the arm drag takes a central role. Stephen covers how to create the perfect angles as well as how and when to use different grips in order to drag successfully. A good portion of this volume goes into dissecting arm drags before returning to snap downs. Even more concepts on weight distribution, pressure, base and pummeling complete this second volume of the ‘Pillars Clinch And takedowns” DVD. 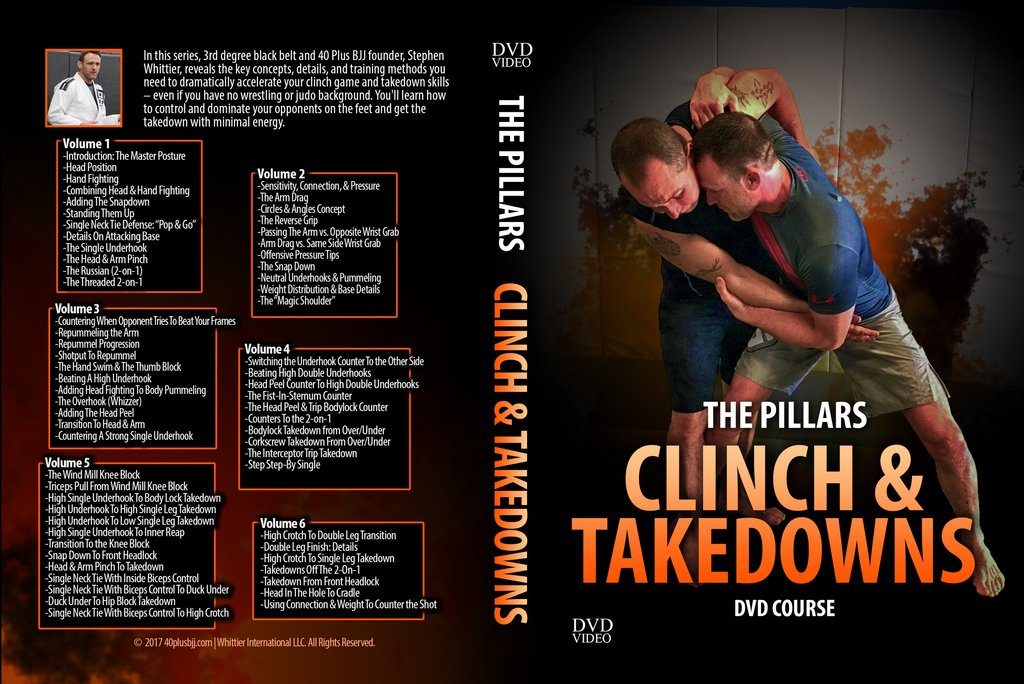 Part three heads off into the depths of actual clinch fighting. As you know, the clinch offers opportunities for both persons, so you need to know how to get the advantage. Having an opponent try and beat your frames is one of the most common issues you’ll encounter. Whittier has the perfect solution to it right at the start of this volume.

There is a lot of pummeling in this portion of the instructional, and rightly so. If you can’t pummel yourself to a top clinch position, you’re better off pulling guard. What Whittier offers are options for pummeling and pummeling that work in a very progressive manner. The goal is to ultimately reach any of the positions covered in the previous two volumes. Tips, tricks, and concepts in this DVD include beating underhooks and Whizzers, as well as adding in head peels and body pummeling. All in all, this is the most comprehensive clinch fighting DVD you’ll ever watch.

DVD 4 – Introducing takedowns From The Clinch

The fourth DVD starts with the underhook clinch position. It offers options that include both single and double underhooks. The goal is getting there, staying there, and ultimately attacking from there. To that extent, Whittier includes information on a bunch of counters that’ll make your underhooks much easier.
The first takedowns in The “Pillars Clinch And Takedowns” instructional also appear here. Some opening sequences include body lock and corkscrew takedowns form the over/under clinch. There’s also a trip throw in there for good measure as well as a very detailed single leg. During the Stephen Whittier DVD review, I spent a lot of time sifting through this particular volume.

The last two DVDs of this set are all about executing high percentage takedowns from all of the clinch positions covered thus far. Starting with knee blocks Whittier slowly transitions towards body locks, single legs, and some trips. Interestingly, he uses a high inner reap to extreme success, which is something we’re not used to.

As the DVD progresses, attention shifts toward different kinds of takedowns. My personal favorite the front headlock makes an appearance along with some sneaky duck under. Of course, the clinch setup also changes, as all fo these work best from a necktie variation. That said, duck unders conclude this DVD, with options that range from hip block takedowns to high crotch finishes.

The final volume begins with the classic double leg takedown. However, it is anything but classic as here it is all about concepts and preparation rather than speed and power. Here the clinch sets up a hight crotch, and the high crotch opens up a double leg. This is a high-level sequence that guarantees both control and a high percentage finish. To that extent, there are also single-leg options from the high crotch, also covered here.
2-on-1 and front headlock takedowns begin the conclusion of this DVD, and with it, our Stephen Whittier DVD review. The ever so popular cradle also makes an appearance here, with an awesome “head in the hole” setup. The last chapter in this series is one on stuffing shots yourself. In true SBG style, it is all down to connection and weight rather than just mindless sprawling.

IF you take into account the vas number of takedown DVDs out there, it is probably a miracle I ran into this one. Still, even though I know exactly what I want out of a takedown, this DVD really changed my game. The “Pillars Clinch And Takedowns” DVD set is a must-have, especially if you suck at the standing portion of BJJ.