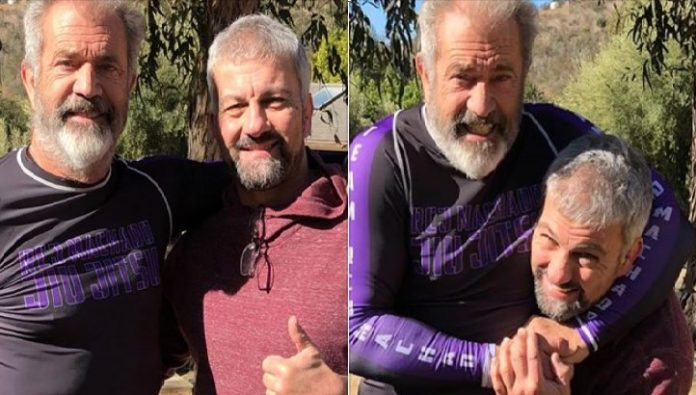 The list of Celebrities training BJJ is getting bigger every day. You can check the list of 58 BJJ Celebrities HERE. There are many stars in there including Guy Ritchie, Ed O’Neill (aka Al Bundy), Chuck Norris, Ashton Kutcher, Keanu Reeves, Tom Hardy and many others.

Mel Gibson is training Brazilian Jiu-jitsu together with Thai Chi for years now. The first time Mel was spotted training BJJ was with Rorion Gracie for His movie Lethal Weapon which was aired back in 1987.

As Gibson stated once, Brazilian Jiu-Jitsu is his favorite type of training. Probably because he doesn’t have to be punched or kicked in a face because he has to stay pretty for his movies 🙂

Seems like Mel Gibson took some BJJ Classes with Carlos Machado lately. Machado posted a picture on his Facebook profile of him and Mel Gibson choking each other.

As a long time Grappling Martial Arts practitioner Mel was using BJJ Techniques in a lot of his movies. Check out Gibson’s Triangle Choke on Gary Busey in Lethal Weapon, 1988. ,

Excellent training this morning with the one and only @melgibsonofficial I could be his stunt double! Lol! Happy he…